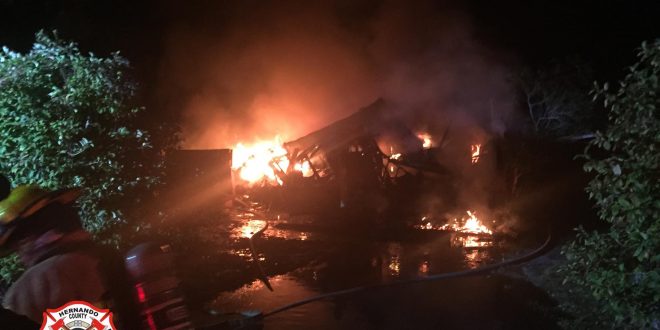 Man’s best friend seems to have proven its loyalty once again.

By barking, a dog in Hernando Beach alerted its sleeping owner Tuesday night to a fire engulfing a neighbor’s two-story stilt house, which was vacant at the time.

Hernando County Fire Rescue received a 911 call shortly after 11 p.m. from the neighbor about the fire, which was shooting through windows and the roof of the home in the 3000 block of Minnow Creek Drive, according to a news release from the department.

Firefighters arrived at six minutes after receiving the call and began fighting it from the outside because the building was too dangerous to enter and a downed powerline lay in the front yard, the release said.

After the power company arrived and turned off power to the line, firefighters were able to better position themselves to contain the fire.

The house structure collapsed, but no damage was caused to neighboring houses and no one was harmed.

Investigators aren’t yet sure what caused the fire.

Kayla Ziadie is a reporter for WUFT News. Follow her on Twitter, @KaylaZiadie.
@KaylaZiadie
Previous Committee Backs Unanimous Juries In Florida Death Cases
Next No. 13 Gators Resilient In Win Over South Carolina