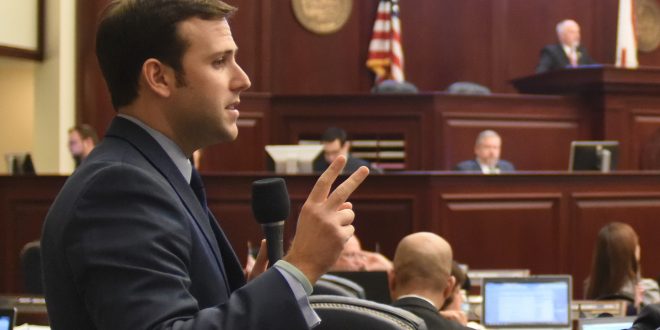 State Rep. Chris Sprowls, R-Palm Harbor, chairman of the House Judiciary Committee, which on Tuesday approved a measure (HB 527) that would replace the law requiring at least 10 of 12 jurors to recommend death with the requirement that juries instead be unanimous. (Photo courtesy Florida House)

TALLAHASSEE — Juries would have to unanimously decide that defendants should be condemned to death, under a fast-tracked proposal aimed at fixing the state’s death-penalty sentencing system after a series of court rulings have put executions on hold in Florida for more than a year.

The House Judiciary Committee on Tuesday approved a measure (HB 527) that would replace a law requiring at least 10 of 12 jurors to recommend death with the requirement that juries be unanimous in calling for lethal injection to be imposed.

The Senate is also hurriedly moving forward with a similar measure, and leaders in both chambers said they want to get a bill to Gov. Rick Scott by the end of the first week of the legislative session, which begins March 7. Scott has indicated his support for the legislation.

Florida’s death penalty has been in limbo since a January 2016 ruling by the U.S. Supreme Court, in a case known as Hurst v. Florida. That ruling struck down the state’s death penalty sentencing process as unconstitutional because it gave too much power to judges, instead of juries.

The Legislature hurriedly passed a law to address the decision, but a series of rulings by the Florida Supreme Court last fall kept the death penalty suspended.

In a pair of October decisions, the state court ruled that the new law was unconstitutional because it only required 10 jurors to recommend death “as opposed to the constitutionally required unanimous, 12-member jury.”

At the same time, a majority of the court determined that capital cases could not move forward until the Legislature fixed the law.

But on Monday, the court appeared to reverse itself on that position, deciding in a pair of consolidated cases that judges could move forward with capital cases — dozens of which are on hold, according to prosecutors — even before the statute is changed.

Legislative leaders said this week’s seemingly contradictory court ruling will not slow down the progress of the death penalty measures.

The wave of death penalty-related rulings by the Florida court in the aftermath of the U.S. Supreme Court decision in January 2016 “created a great deal of paralysis” about capital cases, House Judiciary Chairman Chris Sprowls, a former prosecutor, told his panel before the 17-1 vote approving the measure.

“One thing I found that disturbed families more than anything else is uncertainty,” Sprowls, R-Palm Harbor, said. “It really truly revictimizes them once again. … We will do our small role for those families in ensuring that we have a death penalty statute that is legal and those cases can move forward.”

But Herman Lindsey, who was convicted of murder in 2006 and who spent more than a year on Death Row before being exonerated by the Florida Supreme Court in 2009, told the committee that, while the measure would fix the issue regarding unanimity, the law is still troubled.

“The problem that I have with this bill is that it’s sort of like putting a Band-Aid over something that needs to be stitched up,” he said.

Florida, with 26 Death Row exonerees, leads the nation in the number of condemned prisoners whose sentences have been overturned, Lindsey said.

“We actually need to stop the whole process and get a better review … instead of taking a chance with an innocent person’s life,” he said.

The 10-2 jury recommendation in the law passed last year was a compromise between the Senate — which favored unanimity — and the House, which backed a less-than-unanimous proposal pushed by prosecutors.

Defense lawyers repeatedly warned the Legislature that failing to require unanimous jury recommendations could doom the plan, a position later borne out by the Florida Supreme Court ruling in October.

Some defense lawyers are now advising lawmakers that, even with the potential unanimous jury recommendation, the state law is still problematic because it does not narrow enough the pool of defendants who could be eligible for the death penalty, something courts consider when they analyze states’ capital sentencing laws.

But in an interview with The News Service of Florida, Sprowls said lawmakers are determined to pass a measure that will address only the issue — unanimity — raised by the Florida Supreme Court.

“It’s kind of like having lots of groceries in your hand and you drop one and you go to pick it up and you drop five things more. What we don’t want to do is go in and start tinkering with parts of the scheme that the Supreme Court did not construe as unconstitutional,” he said. “So what we’re doing, rather than going and picking up something and dropping everything else, is we’re just going to fix the part that they said needed to be fixed. The goal is not just to have a working death penalty statute, but to have one that withstands the court’s scrutiny.”

The News Service of Florida is a wire service to which WUFT News subscribes.
Previous Florida May Make It Easier To Sue Doctors Over Abortions
Next In Hernando Beach, Barking Dog Alerts Owner To Fire