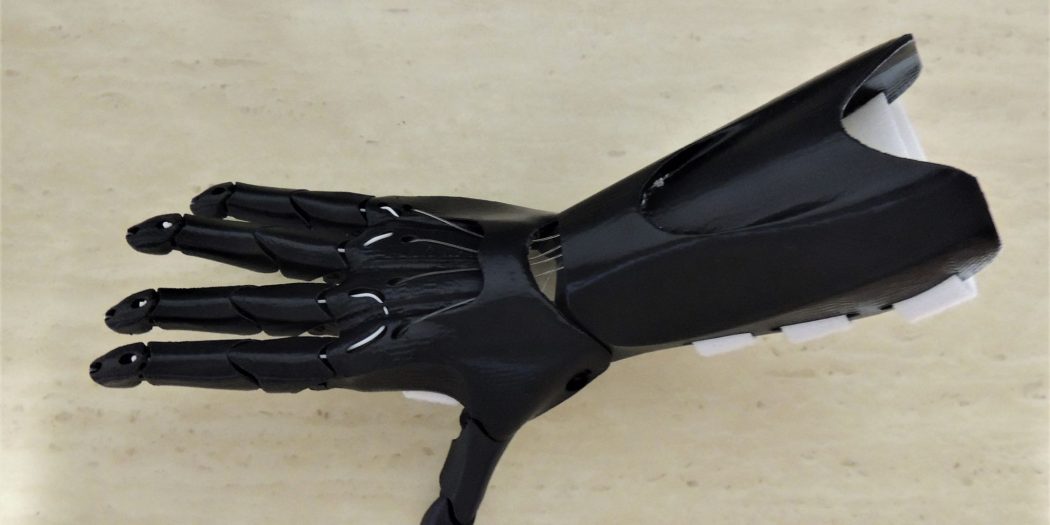 Florida Polytechnic University’s RAD Makerspace Lab is one of the largest MakerBot Innovation centers in the world. The lab will manufacture the prosthetic arms that will be delivered to children in developing countries. (Photo Courtesy of Candelario Baez)

Two University of Florida students have one goal for summer break: to produce 100 arms.

Candelario Baez, 23, and Arthi Balasubramaniam, 20, founded Outreach3D on Feb. 10. Their nonprofit corporation hopes to provide prosthetic arms to those in need and give underprivileged communities the technology and knowledge needed to print their own devices.

“One of the things we’re out to do is to help make kids happy, so they can participate in activities they would not otherwise be able to do, such as riding a bike or strumming a guitar,” said Balasubramaniam, a psychology major specializing in behavioral and cognitive neuroscience.

In order to make their hopes a reality, the students are working with the staff at the Florida Polytechnic University Rapid Application Development Makerspace Lab (RAD).

William Irvin, an Outreach3D board member and a 21-year-old student intern at the RAD Makerspace Lab, said the lab is not seeking a long-term partnership with the organization, but instead is hoping to help the students meet their first goal.

“We want to help them get off the ground and get them pumping out prosthetic limbs,” Irvin said.

Although the organization is fairly new, the students are moving quickly and working to distinguish themselves from other prosthetic organizations.

“What drove me to do this was that all the other groups seemed to be more local groups. They were smaller student organizations, and I didn’t really see a growth,” Baez said. “I wanted to help target countries, other than the U.S. that didn’t have the privilege of having access to a 3D printer.”

In order to meet the students’ goal of creating 100 arms by summer, the students are using open-source designs, which are free 3-D models available for public use. While these first arms are based on existing designs, the students hope to improve the designs in the future and eventually create full-length arms, “in case someone has their elbow amputated in the upper limb,” Baez said. Additionally, they hope to also create a 3-D printed microscope that can detect malaria.

The lab that will help create the first 100 limbs has 55 printers and is one of the largest printing labs in the world and is able to produce the prosthetics at a cost of $20 each.

In addition to the prosthetic arms, Outreach3D is aiming to provide a 3-D printer and a ProtoCylcer to the communities in which they plan to distribute prosthetics. ProtoCyclers grind plastic waste into the filament used to produce 3-D printed models. These devices will allow the communities to print their own models without having to purchase materials every time they hope to do so. It will make them completely self-sustainable, Baez said.

Balasubramaniam said the organization has still not determined an exact place to distribute the arms, but they are considering Brazil and are setting their deadline to this coming summer.

“Getting people that have next to no experience with these futuristic technologies knowledgeable on them, gives them a head start to reach out of whatever circumstance they’re in and give them the ability to get a better quality of life for themselves,” Irwin said. “That’s what Outreach3D is all about– Empowering people through technology.” In the future, Balasubramaniam and Baez are hoping to extend their network to other universities in order to meet the needs of a greater number of people in a wider range of places.

“We want to reach out to universities and connect with doctors and licensed prosthetists,” Balasubramaniam said. “We hope to increase production to do the most good for the most people.”

Katie is a reporter at WUFT News who can be contacted by email at kmellinger13@ufl.edu.
@@kmellinger13
Previous Will You Marrow Me? Students Encourage Bone Marrow Registration
Next Feb. 22, 2017: Morning News In 90

For the first time in nearly a decade, NASA astronauts will strap in Wednesday for a rocket launch from Florida's Space Coast, a significant milestone for a region hit hard by the retirement of the space shuttle.