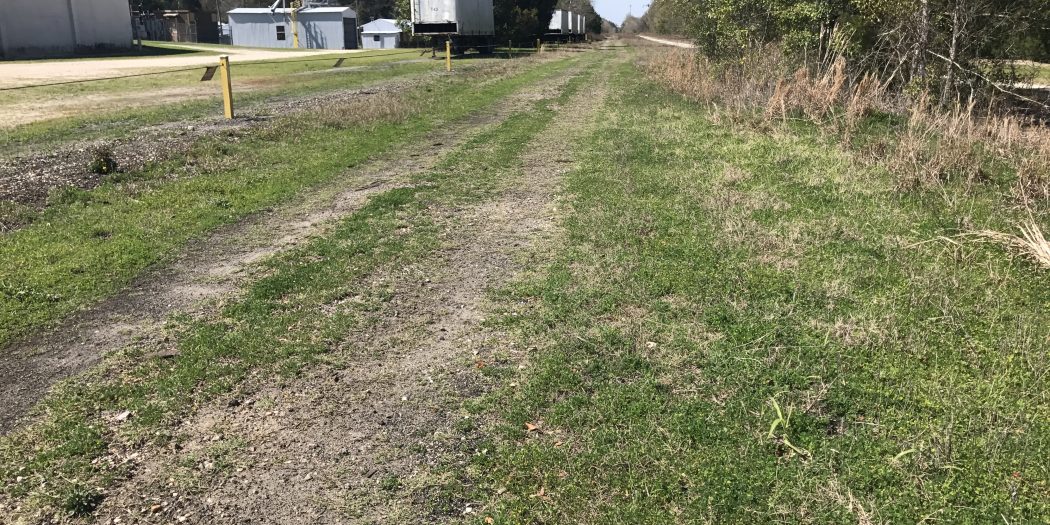 The rails from the old train track used to lay in this patch of grass but were removed in preparation for a new outdoor trail. The new will connect High Springs and Newberry. (Meagan Meredith/WUFT News)

An old railroad line connecting High Springs and Newberry may be converted into a 13-mile outdoor trail between the two cities.

The proposed trail, which runs through northern Newberry, High Springs and along the Santa Fe River, will replace the old CSX Transportation line and connect to other trails.

Although the train tracks have already been pulled out, the purchase isn’t complete. Since railroad acquisition is federally regulated, it can be technical, said Doug Hattaway, who specializes in railroad real estate as a senior project manager at The Trust for Public Land.

The Trust for Public Land, a national nonprofit whose mission is “to create parks and protect land for people, ensuring healthy, livable communities for generations to come,” according to its website, will buy the land from the railroad company. Hattaway estimates the cost at a little over $3 million and will act as interim owner until Alachua County buys it.

Hattaway said this project is a big deal to the community and has a host of benefits.

“Economically, it’s going to drive private investments in the communities because they’re going to cater to the trail users, and we’ve got the health benefits because people will use it to exercise,” he said.

Dan Patterson, who lives about 100 feet from where the trail will be, said he is ecstatic about it. He said he wants to go running somewhere besides the street.

“I was pumped when they pulled the tracks out,” he said.

Patterson said the trail will be a great way to see the state and exercise, and that he doesn’t think there’s other use for that land. Patterson added that it might boost tourism, which Hattaway said is why High Springs sees this land as an opportunity for economic development.

“Why not turn it into something that’s cosmetically appealing and beneficial to those that live here and those that are visiting?” Patterson said.

But Shawn Dorsey, who has family ties to the city’s railroad industry, wishes the tracks would remain in place for families to ride between High Springs and Newberry.

“That’s the neatest thing to have that little ride,” she said.

Dorsey said it might have even brought some revenue to the town, but knows it would’ve been an expensive idea.

High Springs resident Kelley Patterson said she also wishes the tracks could’ve remained. She grew up in the area, and currently lives by the future trail with her fiancé.

“I was actually kind of surprised that they removed it because I feel like it was such a historic part of High Springs,” she said.

Dorsey said the railroad tracks made the small town feel original and homegrown to her, but now that the tracks are gone, she’s not necessarily opposed to the trail.

“I just always liked the railroad tracks better,” she said.

Dale Swilley, who also has family ties to the railroad industry, said she supports the new trail but is sad to see the old tracks removed.

“The [tracks] weren’t being used,” Swilley said. “I think the bike trail is wonderful.”

Once the county buys the railroad from The Trust for Public Land, the project will be funded by the county’s voter-approved Wild Spaces Public Places program. Hattaway said there is also a request to acquire state funds.

The trail will be owned and operated by Alachua County and the City of High Springs, Hattaway said. Construction will begin once the purchase is complete, around the end of the year.

Meagan Meredith is a reporter for WUFT News. You can reach her by email at meagmeredith@ufl.edu or by phone at 469-734-8727.
@@MeaganMeredith
Previous Speaker Offers Money For Visit Florida — With Conditions
Next Afternoon News In 90