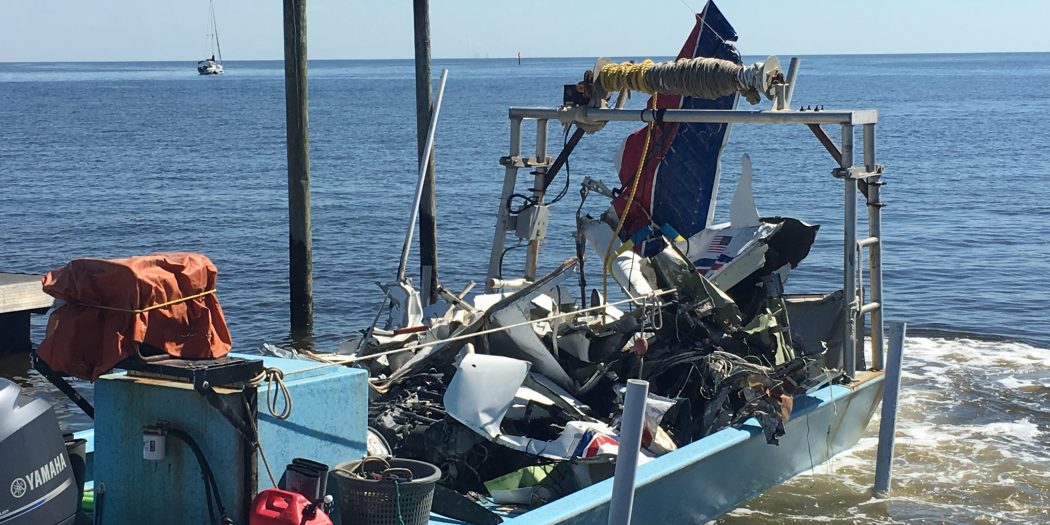 Updated, March 7, 2017: The Levy County Sheriff’s Office sent out the following update this afternoon, announcing that the remains of the third person on the plane have likely been found:

On February 12, 2017 a single engine plane inbound to Cedar Key crashed into the Gulf of Mexico approximately 6 miles SSE of the island. The pilot, Jasper Jerrels, passengers Hue Singletary and Dylan Jerrels perished. Both Jasper Jerrels and Hue Singletary were found by search crews. Dylan was not located.

On March 1, 2017 the LCSO, assisted by the Alachua County Sheriff’s Office dive team, responded near the coordinates where the main fuselage of the downed aircraft was located. Dan Griffith, owner/operator of the volunteer organization Florida Sonar Search Team, located debris and requested divers take a closer look to identify the objects. ACSO dive team members located personal effects and bone fragments at this location. The bone fragments have been examined by the Medical Examiner’s Office and verified as human bone. Based upon the location where they were found and type of bone, it is believed these are the remains of Dylan Jerrels. Additional DNA testing will be conducted to positively confirm this.

Sheriff McCallum vowed to continue the search for Dylan until he was located. He said, “I know this family personally and can understand the pain this family has to endure. I will continue this search until we can offer closure to Dylan’s family.” Search crews are scheduled to conduct additional searches in this same location later this week.

Sheriff McCallum also expressed his thanks to all the agencies, other Sheriff’s Offices and all volunteers that have aided us in this search, especially Mr. Griffith. Their assistance has been remarkable and is very much appreciated.

Original story, Feb. 20, 2017: Late Sunday afternoon, officials in Cedar Key located the plane that went missing last week, along with the remains of a second passenger. The body of the plane’s pilot, Jasper Jerrels, 65, was found Wednesday.

Sea Tow and Florida Air Recovery in collaboration with the Levy County Sheriff’s Department discovered the wreckage beneath 10 to 12 feet of water about seven miles off the coast of Cedar Key, according to officials. Recovery crews also found the remains of 60-year-old Hue Singletary, Jerrels’ fiancée.

Her body was removed from the scene on Sunday night, but the recovery crew returned Monday afternoon to remove the plane.

“It’s definitely the plane. I’ve rode in it,” Teresa Cooper, Jerrels’ niece, said as the wreckage was brought into the Cedar Key Marina. “It’s a whole tragedy that we’ve lost three people. There’s another family member out there that has not been found as of yet.”

Jerrels’ 17-year-old son, known to friends as Dylan, was also in the plane when it went missing. The Levy County Sheriff’s Office said they will continue searching for him.

“I can tell you with 100 percent certainty that the Sheriff’s Office is not done with this search,” said Levy County Sheriff’s Office spokesman Lt. Scott Tummond. “We have a job to do, and we want to make sure this family knows exactly what happened.”

Tummond said this was one of the most difficult cases of his career. Tummond also said, along with the recovery crew, that it was one of the worst plane wrecks they’ve seen.

According to a member of one of the recovery crews, the entire side and roof of the plane were torn off upon impact, and it was difficult to see distinguishing features in the wreckage.

The plane will be taken to a facility in Jacksonville for investigation. Meanwhile, the search for Dylan will continue.

Found amongst the wreckage – a pair of jeans, torn completely down the seams. Police & recovery crew said they will keep looking @WUFTnews pic.twitter.com/WOSo6zL4n5

Teresa Cooper walks away from the wreckage. Bodies of her uncle and his fiancée have been found, but her cousin is still missing @WUFTNews pic.twitter.com/g5bVlvT6zH

Florida Air Recovery said crash caused side and roof of the plane to be torn off. This is one of the worst crashes they've seen @WUFTNews pic.twitter.com/4sAHYgQqs6

Recovery crews tell me this is one of the worst wrecks they've seen. Notice the missing top, mangled cockpit and bent propeller. @WUFTNews pic.twitter.com/Ja213VjVho