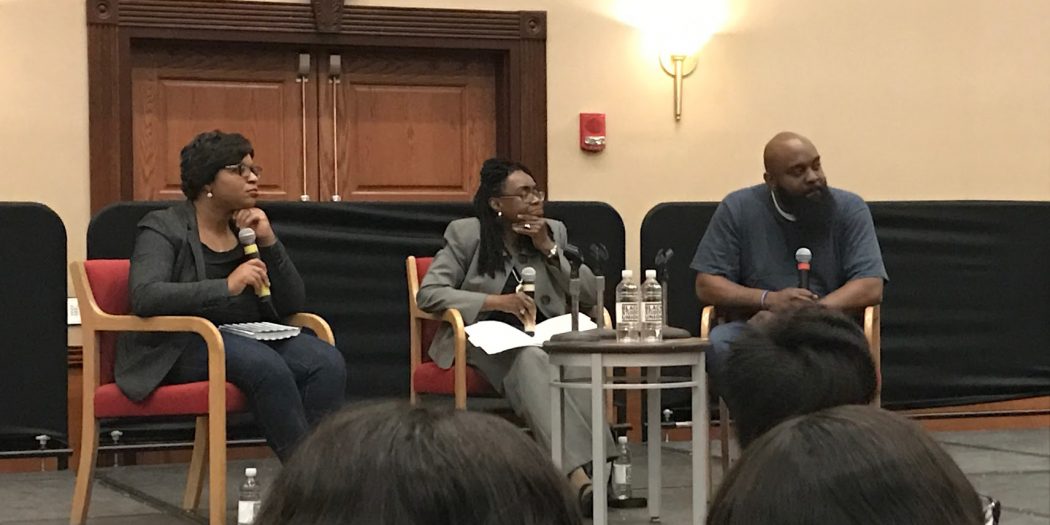 Before Camille Okonkwo heard Sandra Bland’s story, she didn’t think she would have to talk to her mother about potential interactions with law enforcement. She was only worried about her younger brothers’ safety.

“When Sandra Bland happened, it was one of the first, more prominent cases of a black woman who was killed in an encounter with police,” she said. “I realized it could happen to me too.”

When Bland’s sister, Sharon Cooper, and Michael Brown Sr., Michael Brown’s father, came to the University of Florida to share their stories, Okonkwo joined about 70 other students to listen. Bland was found hanged in a Texas jail cell in July 2015. Brown was fatally shot by an officer after allegedly robbing a convenience store, and his death sparked protests in Ferguson, Missouri.

As part of Black History Month, the University of Florida Black Student Union brought Cooper and Brown to campus to lead a conversation about their loved ones, police brutality and criminal justice reform. Ashley Aristide, BSU president, said after months of coordinating schedules, she was glad to have two prominent speakers who could spark an important conversation.

“A lot of events have happened to people in our community that aren’t necessarily just,” she said.

The talk was led by Gwendolyn Simmons, a UF assistant professor of religion and faculty member in the women’s studies department.

Brown said since his son’s death in 2014, every day has been a struggle.

“I just drop to my knees and ask for some help to get through my day,” he said.

Over two years later, he said he and his family are still fighting civil legal battles for justice for his son. “Money’s not gonna bring Mike back,” he said.

Brown had two words of advice for students who want to see change in the criminal justice system: “Stand up.”

Students snapped their fingers in agreement.

“We have nobody backing us,” he said. “So we have to back ourselves.”

Cooper said this time of year is especially difficult because Bland’s birthday is in February. She would have just turned 30.

To honor her sister’s life, Cooper speaks at universities five to 10 times per year.

“The reason we have to speak out is because immediately, when something happens to a black or brown person we are instantaneously criminalized,” she said. “And the question becomes what did he or she do to cause their own demise.”

Before her sister’s death, she said she viewed police brutality as a black male issue.  But when a dash cam video showed her sister’s encounter, she learned it could happen to women too.

“In addition to saying the names we hear so often, Mike Brown, Trayvon Martin, Oscar Grant, Freddie Gray, you have to say her name as well,” she said. She didn’t mean just her sister’s name, which was widely searched for on social media after her death.

Cooper encouraged UF students to stay informed and be active in fighting for causes they care about.

“The fight, as it relates to not only police brutality but social justice in particular, is gonna[sic] be fought at the grassroots level,” she told the crowd. “You are capable of so much more than you know.”

In an interview with WUFT News after the event, Cooper said she wants people to know that her sister is more than just a hashtag.

“Sandy was a beloved daughter, cherished sister and friend whose charisma, tenacity and unapologetic confidence lives on in the hearts of those who miss her dearly,” she wrote in an email.

Through self-care, storytelling and devoting herself to social change, she said she has been able to transform her pain into purpose.

“I encourage students to find out the why behind what keeps the citizens of their community up [at] night and search tirelessly for ways to engage in change, whether the efforts are big or small.”

Carly Breit is a reporter at WUFT News. She can be reached at 954-892-2308 or carlybreit@gmail.com.
@@The_Breit_Side
Previous In Photos: Ocala Goes Back In Time At Annual Prehistoric Festival
Next Feb. 20, 2017: Morning News In 90