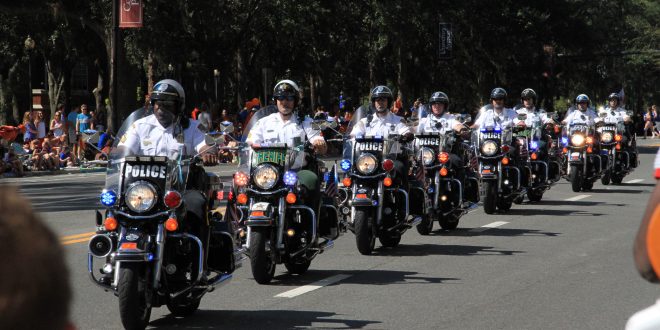 Gainesville Police Department officers and Alachua County Sheriff’s Office deputies on University Avenue in 2016. The former is seeking a $750,000 grant from the U.S. Department of Justice to help pay for a $3 million body-camera program. (File/WUFT News)

The Gainesville Police Department has applied for a grant to help pay for body cameras.

If approved, the department would receive up to $750,000 from the U.S. Department of Justice, helping cover the $3 million cost of implementing a camera program, including the equipment itself and training, Gainesville police spokesman Ben Tobias said.

“That’s money we know we do not have in taxpayer dollars,” he said, “nor would we want to make the taxpayers foot a $3 million bill to outfit all of our officers.”

Tobias said he is hopeful that the department will receive the grant, but if it doesn’t, it and the city will continue to look for other ways to pay for the program.

“We’ve been talking about body-worn cameras for many, many years, even before some of the high-profile incidents that have thrust that topic into the conversation,” Tobias said. “But it always comes down to cost.”

Tobias said he isn’t sure how long it would take to implement the program if funding becomes available. He’s also unaware of the extent of the necessary training but noted that it would cover how the video footage is stored, recorded and revised for confidentiality reasons.

Along with every other document created by police, footage recorded by the cameras would be available as a public record, Tobias said.

“Whether it be paper or electronic, everything is a public record, but it is subject to some confidentiality and some exemptions by Florida state statute,” he said.

Using the cameras would encourage good behavior from both officers and citizens while also accurately documenting interactions between the two, Tobias said. He compared body cameras to dash cameras, which are in about half of the department’s patrol cars and have been used for 10 to 15 years.

Gainesville and Alachua County overall have had several cases in which the cameras would have been helpful, he said, specifically citing the 2016 fatal shooting of Robert Dentmond.

While the cameras help hold law enforcement and citizens accountable for their behavior, their effectiveness is limited by their range of view, Nunn said.

“The body camera can show you an objective view,” he said, “but it is from the police officer’s perspective.”

In addition, they aren’t always effective because officers can choose to use them improperly, said Michelle Jacobs, a UF law professor and assistant director of the Criminal Justice Center.

“As we have already seen from stories where cameras are in place,” she wrote in an email, “the police who are intent on not having any evidence of wrongdoing will simply turn the cameras off, or point them in a direction where their behavior cannot be clearly seen.”

Jacobs said the cameras also raise questions of privacy — for people directly involved as well as anyone nearby.

“What happens to footage of interactions where no arrest occurs? Can the individual stopped claim the footage, is it erased, or how will these agencies handle it?” Jacobs wrote. “You also have images of people on the street who are not involved in the interaction. Will their images be scanned into databases that use facial-imaging technology?”

Nonetheless, Nunn said he thinks that recording police-citizen interactions — whether by body, dash or cell phone cameras — is beneficial to the relationship between the two.

“I think that body cameras and dash cameras are useful additions to make sure that law enforcement officers are performing their duties effectively and citizens are behaving, as well,” he said.

Regardless of the technology, though, the effectiveness of the cameras is contingent on the police force’s preexisting relationship with the community, Tobias said. Their use, he added, will benefit the police-citizen relationship in Gainesville specifically.

Anne Marie Tamburro is a reporter for WUFT News and can be reached at 850-324-4389 or amtamburro@ufl.edu.
@amtamburro
Previous Florida House Moves To Withdraw From Refugee Program
Next Feb. 17, 2016: Morning News In 90