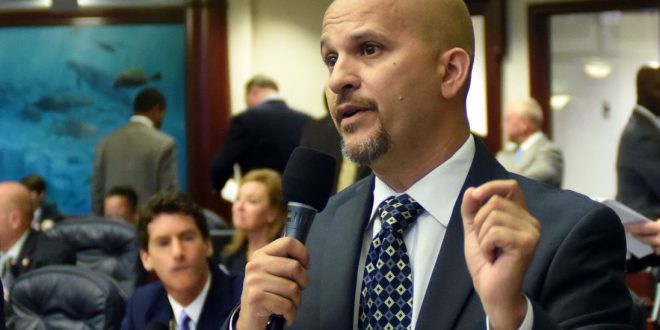 House Bill 427, by state Rep. David Santiago (pictured), would direct Florida's refugee coordinator to provide notice by June 30 to the director of the federal Office of Refugee Resettlement that Florida will no longer participate in the program effective Dec. 31. (Photo courtesy Florida House)

In a party-line vote, the House Children, Families & Seniors Subcommittee supported a measure (HB 427) by Rep. David Santiago, R-Deltona, that would direct the state refugee coordinator to provide notice by June 30 to the director of the federal Office of Refugee Resettlement that Florida will no longer participate in the program effective Dec. 31.

Santiago acknowledged there is no “evidence” terrorists have used the refugee program to enter Florida and that the withdrawal wouldn’t halt the federal government from locating refugees in the state. However, he said his intention is to send a “message to the feds” to improve the refugee-vetting process and to keep terrorists from using the program.

“What we do have is evidence of what has occurred in other countries and other states where the refugee program has been infiltrated,” Santiago said. “We’re in an ever-changing, global threat. And our enemies are getting smarter and smarter and finding other ways to find weakness within our processes.”

House Democrats staged a walkout three weeks ago when the committee heard from a speaker with a history of inflammatory statements about minorities and immigrants during a discussion involving the refugee program.

This time, members of the minority party objected by calling the bill politically based and said it would leave the state without the ability to engage in future discussions about refugee resettlement.

“It’s almost as if we are being asked to accept the bogeyman’s argument that refugees in this state are the problem,” said Rep. Kionne McGhee, D-Miami. “What the bill does is, it sends red meat to the base of a political party in order to justify future elections. It’s wrong.”

Florida is budgeted to receive $257.4 million in the current fiscal year from the federal government for the refugee services.

A House staff analysis estimated the state’s withdrawal would eliminate 41 federally funded full-time positions in the state Department of Children and Families.

The notice period is expected to give the federal government time to find non-profits to handle future resettlements in Florida.

Scott McCoy, with the Southern Poverty Law Center, an organization that monitors hate groups, told the committee the “expensive, message bill” is counter-productive in that it simply removes the state from participating in the refugee process.

The measure, which must get through two additional committees, does not have a Senate version.

The U.S. admitted 84,995 refugees from the Democratic Republic of Congo, Syria, Burma, Iraq, Somalia, Bhutan, Iran, Afghanistan, Ukraine and Eritrea in the past federal fiscal year, according to the staff analysis. Florida received 2,983 of those refugees, who were forced to flee their home countries to escape war and persecution and cleared interviews and background checks conducted by the United Nations, the U.S. State Department, FBI, Department of Homeland Security and Department of Defense.

Florida also received 55,150 refugees through the Cuban/Haitian entrant program in the past fiscal year.

Santiago’s measure continues the state’s efforts to separate itself from federal refugee programs.

In a letter, Corcoran described refugee services as a “one-sided partnership” in which Florida and contractors have to follow federal directives.