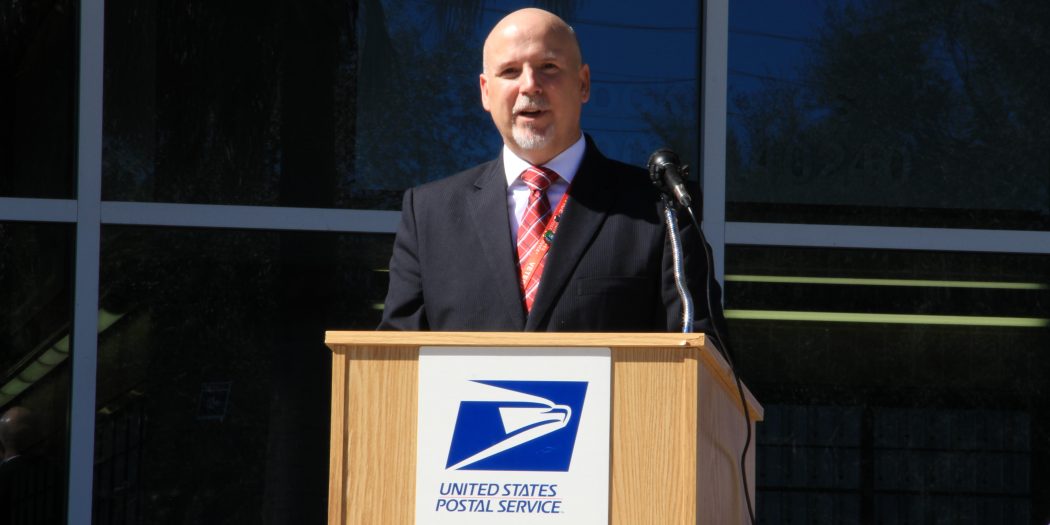 Daniel Becker addresses those in attendance at his oath of office ceremony at the Gainesville General Mail Facility on Thursday morning. Becker was sworn in as the 29 th postmaster in city history. (Dylan Dixon/WUFT)

Daniel Becker, a man with more than 23 years of experience working for the United States Postal Service, was officially sworn in as Gainesville’s newest postmaster on Thursday morning.

Becker has served as the city’s postmaster for more than six months after replacing Matthew J. Connelly on July 23, but hadn’t formally taken the oath of office until this week.

Becker is the 29th postmaster in the history of Gainesville, a position that currently oversees 130 routes, 240 employees and 92,000 deliveries, according to the USPS.

Before the inauguration began, Becker expressed his excitement over continuing to serve the city as the leader of its mailing operations, stating his interactions with the community so far have been “terrific.”

“I really feel at home,” he said. “The people here go out of their way to show that we can work together.”

Becker was sworn into office at the Gainesville General Mail Facility by Steve Kirkland, a manager in the USPS Gulf Atlantic District.

Lucious Sumlar, a marketing manager in the USPS Gulf Atlantic District, and Jean Lovejoy, a postmaster in Jacksonville, also spoke at the ceremony in support of Becker.

“When it comes to the customer, he is three things,” Sumlar said of Becker. “Ready, responsive and provides sound resolutions… He will bring a new and robust energy and encouragement for the Gainesville customer community.”

Mayor Lauren Poe was unable to attend Thursday’s ceremony, but found a unique way to voice his support for Becker.

Through a signed letter that Sumlar presented at the inauguration, Poe decreed Feb. 16 to be officially known as “Daniel E. Becker Day” in the city of Gainesville.

“It’s a tremendous honor,” Becker said on the ceremony. “My goal is just to amaze our customers and our community.”

Becker began working for the USPS in 1994 as a clerk in Elizabeth City, North Carolina, after he finished serving in the U.S. Navy.

After holding several other positions throughout North Carolina, he transferred to Bend, Oregon, in 1998 as a supervisor. In 2003, Becker was promoted to his first postmaster position in Madras, Oregon.

From there, Becker also served as a postmaster in Nebraska and two other Oregon cities, and worked as a manager in Jacksonville before coming to Gainesville in July.

Not all Gainesville residents have pleased with Gainesville’s postal service since Becker took over, however. Complaints of delayed and mis-delivered mail, damaged packages and inaccurate tracking information were reported in November from numerous customers throughout the city.

Becker said he is aware of those issues and is taking the steps necessary to ensure those problems don’t occur in the future.

“One of the things we’re going to be working on is making sure that we’re properly staffed, and that we have enough people to get that mail ready,” Becker said. “Having customers trust is extremely important to me because no matter what we do, if we don’t have their trust, it’s going to be hard to serve them.”

Dylan is a reporter who can be contacted by calling 954-895-2738 or emailing ddixon@ufl.edu.
@@dylanrdixon
Previous ICE Rumors Have Shaken Gainesville Immigrant Population
Next Florida House Attacks ‘Handouts’ Championed By Gov. Scott