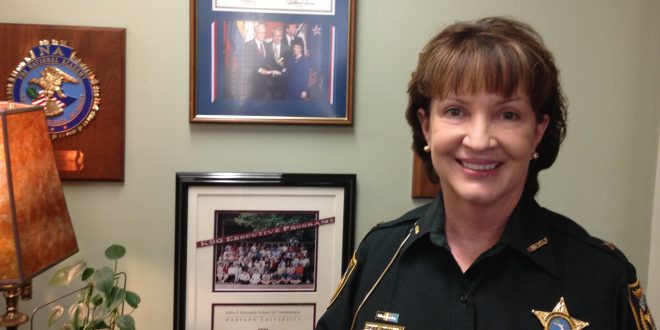 Alachua County Sheriff Sadie Darnell in 2012. The County Commission has filed a lawsuit against the sheriff after disagreements about the budget for the sheriff's office and what it’s being used for. (File/WUFT News)

Alachua County Files Lawsuit Against Its Own Sheriff

A civil lawsuit was filed Monday against Alachua County Sheriff Sadie Darnell based on previous disagreements about the sheriff’s annual budget.

In a meeting in December, county attorney Michele Lieberman proposed the lawsuit, and Darnell spoke against it, saying that the county is “chasing a false premise.”

But the county proceeded with the lawsuit, saying that they cannot come to an agreement with Darnell about the budget and the spending of the money.

“Because the County Commission and the sheriff are unable to agree, the county is seeking judicial opinions on three items,” Mark Sexton, an Alachua County spokesman, wrote in an email.

Sexton said the three items are:

There are two ways that the sheriff’s office is funded: through general property taxes that all people in the county pay, and from the MSTU, which is paid only by people who reside in unincorporated areas of the county for urban services.

The commission thinks that Darnell needs to account for how money is spent so that they can make sure that it’s going to all the right places and not to things outside what was originally intended, Sexton said.

Darnell is aware of the lawsuit but is not commenting until all of the paperwork is sorted out, said Art Forgey, an Alachua County Sheriff’s Office spokesman.

Commission Vice Chair Lee Pinkoson said that the lawsuit is an attempt to gain understanding about what is expected of the sheriff’s budget process. This has been an on-going battle, he added, and what’s needed is “someone to come in and say, ‘This is the interpretation.'”

Commissioners want clear interpretation of the state statutes that they must follow in terms of handling the sheriff’s budget so that “the sheriff knows what the expectations are depending on what the interpretation is,” Pinkoson said. “It could be that the county has to change the way it’s been doing, or look at it a different way.”

Pinkoson said a lawsuit was filed in search of an answer.

“It’s just how the money is handled,” he said, “so that as we get forward in the budgeting process, there is clear expectation one way or another.”

Mercedes Leguizamon is a reporter at WUFT News, she can be reached at 786-619-4733 or by email at mercedeslegui@gmail.com and mercelegui@ufl.edu
@@mercelegui_UF
Previous 3 Threats Written On School Walls In Putnam County
Next After Florida’s 99K Hit-And-Runs, FHP Wants Responsible Driving