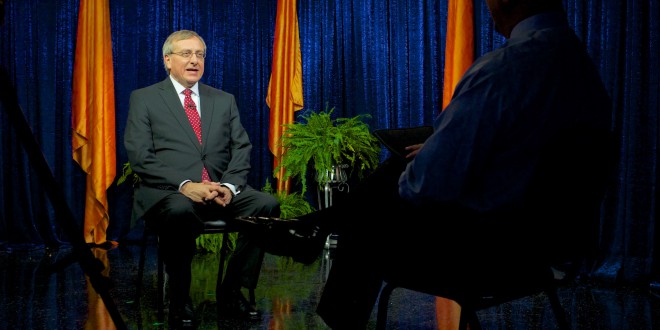 University of Florida President Kent Fuchs in 2014. Proposed legislation could help Fuchs' goal of reducing the student-to-professor ratio on his Gainesville campus from 21-to-1 to 16-to-1, which will take about 550 new faculty members. (File/WUFT News)

TALLAHASSEE — University of Florida President Kent Fuchs said Tuesday that taking Florida’s research universities to the “next level” will be a key in advancing the state’s economy.

“We’re well positioned as research universities to have a state-transforming impact,” Fuchs told the Economic Club of Florida. “However, the key to our success lies in our universities reaching the next level of excellence.”

Fuchs’ remarks come three weeks before the start of the 2017 legislative session. Senate President Joe Negron, R-Stuart, has outlined a series of legislative and budget initiatives for the session aimed at elevating Florida’s higher-education system.

To support those goals, one Senate measure (SB 4) would create funding pools to help universities attract top-level faculty and to recognize top-performing graduate programs, including law and medical programs.

That legislation, which lawmakers would still have to bankroll, could help one of Fuchs’ primary goals: reducing the student-to-professor ratio on his Gainesville campus, which he said averages about 21-to-1. He wants to reduce it to 16-to-1, which will take about 550 new faculty members.

Another Senate initiative (SB 2) would create a performance standard for the universities based on four-year graduation rates, rather than the six-year measure now used.

“The four-year (rate) is not good,” Fuchs said about his school.

For that reason, he supports another provision in the Senate package that would require Florida’s 12 state universities to adopt a block-tuition plan, where students would pay a flat rate for each semester rather than paying for classes on a credit-hour basis.

“I’m a big fan of block tuition,” Fuchs said. “The reason is, I believe it’s in the best interest of our students that they graduate in four years or less.”

The Senate has not settled on any specific block-tuition plan and has asked for recommendations from the universities.

Fuchs said UF is developing a proposal, trying to give students an incentive to take more classes each semester while not reducing tuition funding for the school.

“We don’t want to lose money or make it,” Fuchs said, adding that block tuition “is the one way we’re going to change the four-year graduation rate.”

Although the next state budget remains uncertain, Fuchs said he is glad lawmakers are making higher education a priority in the upcoming session.

“We’re very optimistic that this will be a good year for the research universities,” he said.

The News Service of Florida is a wire service to which WUFT News subscribes.
Previous Feb. 15, 2017: Morning News in 90
Next Record Number Applies To UF; Average Admission GPA Is 4.4