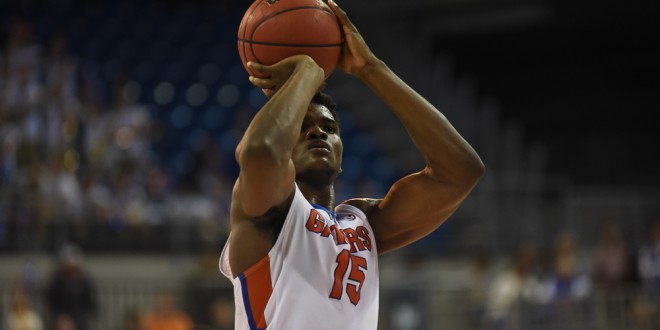 Florida center John Egbunu during a game against the Georgia Bulldogs in January 2016. Egbunu went down with a knew injury in the first half of the 15th-ranked Gators' win over Auburn on Tuesday and is expected to have an MRI today. (File/WUFT News)

Florida center John Egbunu left the Auburn game in the first half with a left knee injury and didn’t return.

Egbunu went down in the first half of the 15th-ranked Gators’ 114-95 win over Auburn on Tuesday night. He had 10 points and four rebounds before going down after a battle for a rebound midway through the half.

Egbunu was helped off the court and toward the locker room. He is expected to have an MRI today. Coach Mike White said he didn’t have any update on the significance of the injury.

The 6-foot-11, 255-pounder came in averaging 7.7 points, 6.7 rebounds and 1.6 blocked shots. Egbunu ranks in the top 10 in the Southeastern Conference in both rebounding and blocked shots.

The Associated Press is a wire service to which WUFT News subscribes.
Previous No. 15 Gators Take Down Auburn In Tale Of Two Halves
Next After 2 Days Evading Police, Levy County Man Turns Himself In