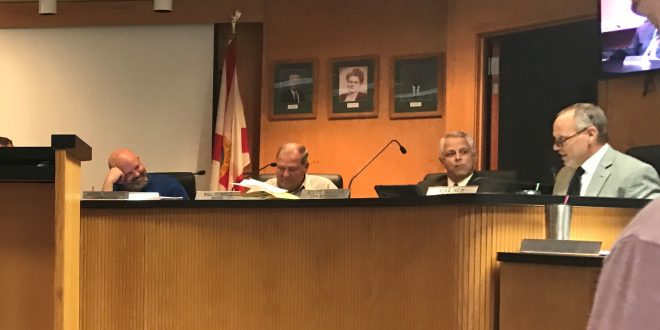 The Newberry City Commission voted Monday to institute a six-month delay on the development and permitting of medical-marijuana dispensaries.

The delay will last 180 days and is intended to give the commission time to review and decide locations for the dispensaries, according to the ordinance.

The city will also use this time to decide if any regulations for the facilities will need to be added to the city’s laws.

The ability for local jurisdictions to allow dispensaries comes after a series of legislative moves in Florida — the latest being the statewide vote in November 2016 — to give access to marijuana for those with certain illnesses. The marijuana is being produced by seven licensed growers, but local governments are still able to block dispensaries from setting up shop within their borders.

At the meeting, Coleman said of his dissenting vote, “I’m totally against dragging this out.”

Coleman told WUFT News on Wednesday that he had an uncle who recently passed away from a terminal illness and would have benefitted from the marijuana provided by the facilities.

“[My uncle] didn’t have six months for a moratorium,” he said.

Morphine made his uncle sick and didn’t work as well as the limited amount of marijuana he was able to obtain, Coleman said.

Marijuana “kept him comfortable,” he said. “It proved to me that the stuff really works.”

The three commissioners who approved the delay didn’t say anything about it before voting Monday, but Commissioner Jordan Marlowe told WUFT News on Wednesday that he voted in favor because he wants Newberry to have more time to analyze the state’s guidelines on dispensaries.

“We have so many questions about state regulations,” he said. “We don’t have any guidance on how it’s going to practically play out.”

If Newberry residents need access to a dispensary in the meantime, he said, they can travel to a place that already has them, like Gainesville.

With the delay in place, Newberry dispensaries will be allowed to move forward with development starting in July.

This story has been updated with comments from Marlowe.

Amy Nelson is a reporter for WUFT News. She can be reached at news@wuft.org or 352-392-6397.
@@AmyNelsonUF
Previous Calls About Bears In Neighborhoods Drop
Next Body Identified In Cedar Key Plane Search