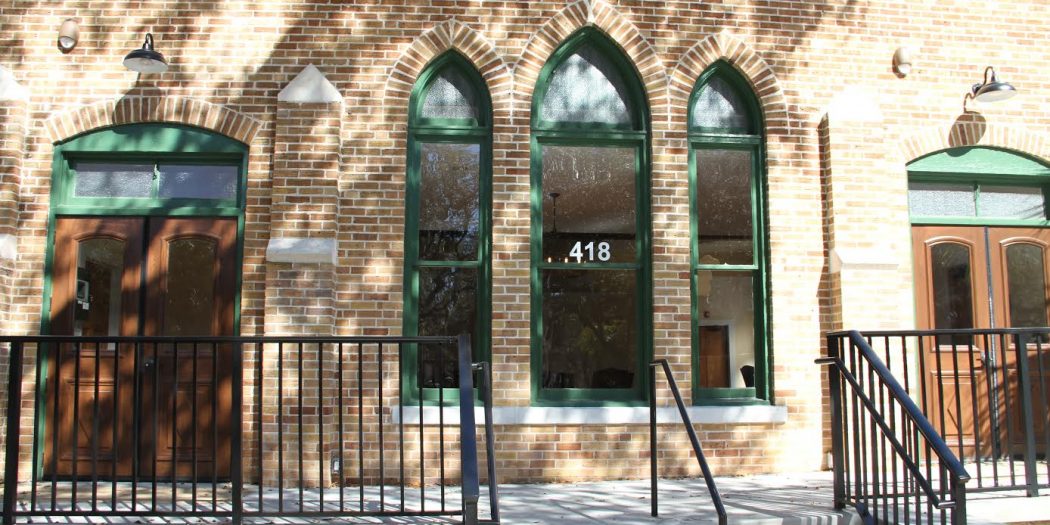 The Matheson Museum is unveiling its new archive and library building at 418 East University Avenue on Thursday. (Nikhil Srinivasan/WUFT News)

The Matheson History Museum is getting a new library and archive space.

The museum is expanding into the former Gainesville Gospel Tabernacle building, which was home to a Melting Pot restaurant from 1982 to 2009. It sat idle for the next five years before the Matheson bought it in 2014.

The restoration was funded by a $300,000 grant for historic preservation from the Florida Department of State’s Division of Historical Resources. The grant requires that certain specifications are met to ensure the building complies with historic preservation standards, including specialized window glass and wood flooring. Contributions from private donors also helped to finance the restoration.

The archive is located at 418 East University Ave., across the street from the museum’s main building.

According to Peggy Macdonald, the executive director of the museum, the building was in a state of disrepair when they bought it, and they had to bring in an architect and construction team to restore and redesign it.

“When Jay Reeves and Joyner Construction started to work their magic on it, it was in great need of help,” Macdonald said. “Not only was it in complete disarray, but there were structural issues as well.”

According to Macdonald, the building was originally built on a filled creek bed, which meant that the crew needed to build structural piers into the bedrock to stabilize the building. There was also damage to the roof, fire and water damage, and mold issues due to the building being unoccupied for five years.

According to Ryland Wagner, the project manager at Joyner Construction, and Jay Reeves, the architect who designed the archives, the goal for the building to keep its original look.

“We tried to kind of keep with the original layout of the church that was there in 1933 when it was built,” Wagner said. Reeves deemed it a success.

“We were able to take the building back and capture the original character of when it was built in the 30s,” Reeves said. “We put back a lot of the materials that were missing from the inside and restored the outside to where it looked pretty true to the way it did when it was built.”

Cathy DeWitt, a musician-in-residence at UF Health at Shands as part of the Arts in Medicine program, will be attending the unveiling and believes the central archives will help the museum.

“There are so many historical documents at the Matheson, I think it’s going to be really helpful to have a place where that all could be archived,” DeWitt said.

Karen Kirkman, member of the Alachua County Historical Commission and long-time visitor of the museum, mirrors this sentiment and is very happy to see this trend of preserving historic landmarks in the city.

“I think it’s wonderful to see the interest in historic preservation on the part of the community and I think the Matheson has been and continues to be a tremendous resource for anyone interested in local and Florida history,” Kirkman said.

Hope Meucci, owner of the Melting Pot restaurant from 1982 to 1999, was ecstatic that the Matheson acquired the building. She was also happy with the reconstruction efforts.

“It was so wonderful to see someone like them buy it. You know, someone who was actually going to put it to good use because it’s such a beautiful building,” Meucci said. “They’ve done such a beautiful job recreating it for what they want to do.”

This outside restoration meant cleaning up the bricks, trimming the trees, redoing the front doors and repairing the windows. The team also added Americans with Disability Act (ADA) approved ramps for wheelchairs and mobility scooters both inside and outside the building.

The process of planning and obtaining permits took around a year, while the restoration and construction took place from late spring to October 2016.

Macdonald said she was very happy with how the building turned out and how the team was able to incorporate elements from the restaurant and church while remaining cost-effective and within the regulations.

There will be a fundraiser on Thursday which aims at raising money for computers, shelving, chairs and tables for the library part of the building. Tickets for the fundraiser are $75, and there will be a silent auction and champagne, as well as chocolate-covered strawberries provided by former restaurant owner Hope Meucci. The fundraiser is from 6:00 to 8:00 p.m. at the new building at 418 E University Avenue.

Nikhil Srinivasan is a reporter at WUFT News. You can reach me at niksri13@ufl.edu or (352) 727 8145.
@@NikhilSriniva13
Previous Organization Educates Women On How To Use Firearms
Next Florida ‘Water Wars’ Arguments Rejected