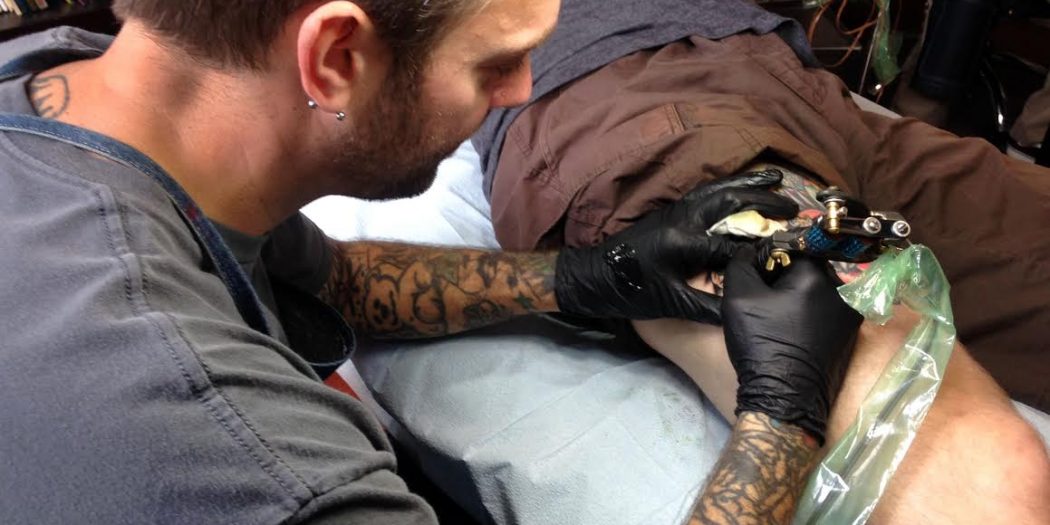 The event was hosted at Anthem Tattoo shop at 230 NW 2nd Ave, and included $50 tattoos from artists’ designs on “flash sheets” and raffle prizes from local businesses. The event was also a celebration of the parlor’s 10 year anniversary.

Owners Mike and Samantha Salay decided to use the event to benefit an organization that holds special significance to them.

“Someone in the Anthem family has a blood cancer,” Samantha Salay said, “We want to help the cause as much as we can.”

Salay declined to identify the person.

The event began at noon and by 12:30 p.m. Salay said that the parlor was at capacity.

Anthem Tattoo Parlor was filled with regular customers and some who had never been tattooed before.

“A lot of familiar faces from our community came out to support,” Salay said.

One frequent customer who came to the event was Casey Stern.

The 42-year-old said that he has “30ish” tattoos already including thirteen Friday the 13th tattoos that make up two “socks” on his ankles.

On Sunday Stern chose an Oni, a Japanese demon, to be tattooed on his thigh.

“It was really difficult to choose,” Stern said, “I just kind of had to narrow it down.”

Stern said that it’s a fun tradition to come to Anthem for their special events to get tattoos and support the parlor.

“I appreciate the fact that they’re always giving back to the community,” Stern said.

Over 40 people were tattooed at the event by four artists, Mike Salay, Tim Stratting, Dave Kotinsley and Rich Mal. 48 designs were created specifically for the event.

Licht could not be reached for comment at the time of publication.