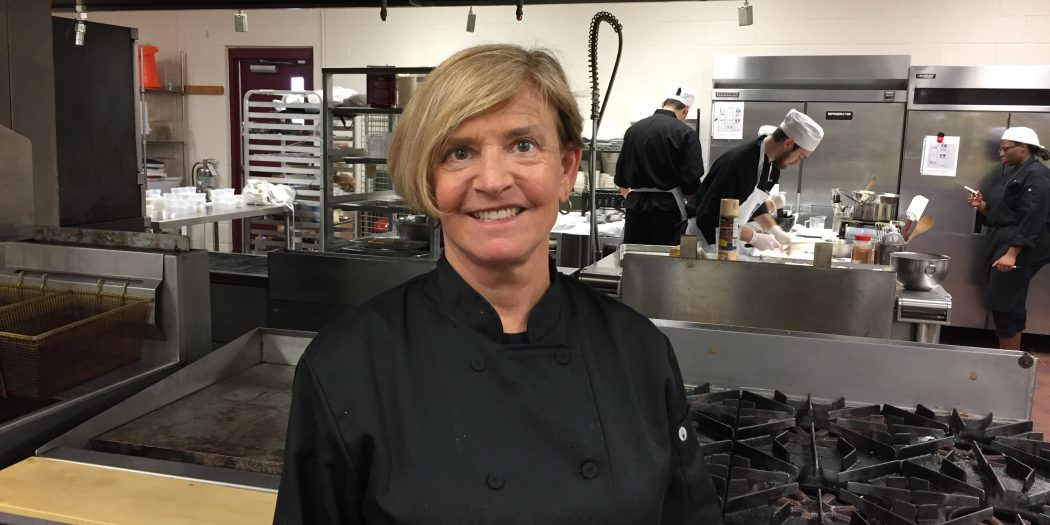 Billie DeNunzio is the director of the Culinary Arts Academy at Gainesville’s Eastside High School. DeNunzio has led the program to rank best in the state for nine consecutive years, as well as recently being named the 12th best hospitality program in the nation by the National Center for Hospitality Studies. She has been the director of the academy for 20 years. DeNunzio is also an evaluator for the American Culinary Federation and has worked with Pearson Publishing in the past as a culinary and hospitality textbook reviewer. Before moving to Gainesville to teach in 1975, she worked for several years in Atlanta as a banquet manager at a Quality Inn. She is currently devoting the majority of her time to help turn Eastside High’s culinary arts into one of the best in the country.

WUFT: You are the director of one of the top high school culinary arts programs in the nation. It’s the best in the state. You’ve won countless awards. How pleased are you with what you’ve built here at Eastside High School?

BD: Well, I’m very pleased for the students because of the impact it makes on them, as well as the impact it makes on the community, as far as letting people know about the program. One of the big things with students this age is that they know what they want to do, but they don’t know the avenues that they have to go through to do it. So if something gets in the paper or gets on TV, then they find out about us, and from there it helps the program grow.

WUFT: Could you give a basic rundown of what exactly your program entails? What do the students learn how to do?

BD: Well, it starts with sanitation safety. First-year students get a lower degree certification, and then by their second year, they get ServSafe, which is a national certification for sanitation safety. So that’s how it starts, and then they also learn stocks and sauces and all the basics in their first year. From there, though, they can go on and start being creative. We also have a big focus on management. Management is a huge part, about 50 percent of the program. If you think about it with restaurants, if you’re getting an education, what are you going to be doing in a restaurant? You’re either the executive chef or you’re a manager or an assistant manager or a buyer, that type of thing. So we go a great deal into that. The culinary is only half of it. Hospitality management is the other.

WUFT: It’s my understanding too that you had the idea to implement a student-run coffee bar on Eastside’s campus. What was the thinking behind that?

BD: Well, we have a dining room that seats 100 people, and we’ve set up a complete coffee bar there. We’ve got espresso machines. They do lattes. They do Frappuccinos. The students think the idea is just to have a coffee bar and sell and things like that. However, the real idea is entrepreneurship. Anything we order or we cater that we do in the kitchen – I order the food, I do the menu, I do everything. But the coffee bar is such that the students order it all. They do all the advertising, all the marketing. They do all of the recipe development, the menu development. And if they forget something or mess it up, I don’t fix it. Sometimes the best way to learn is by your mistakes. So the coffee bar is 100 percent run by the students. If they’ve run out of coffee or mocha or chocolate or anything, then it’s just the natural consequences… It’s like running your own business.

WUFT: Eastside High was recently named the 12th best hospitality program in the country. When that announcement came out, you said “this is something that takes schools years to achieve.” How much of a work in progress has this been for you from when you first arrived at Eastside to where you are today?

BD: Well, I’ve been here for 20 years, and we’ve built this up more and more and more. It’s a work in progress because you improve every year in whatever you do. One of the reasons that we got the award is because of all of the activities we do, and when we started we didn’t do any of these activities. They grew over time. It’s the same with competitions. We only did local competitions at first, and we started winning and the kids said “well can we do more?” Now we do a tremendous amount of competitions. It just kind of builds on itself and people start contacting you.

WUFT: We’ve seen a big trend lately with a lot of cutbacks being made on arts programs in high schools. How important is it for students to have those programs available to them, so that they’re not cooped up working on math and reading and science all day?

BD: Well, it’s funny you say that because we do math, reading, and science in here. I used to teach chemistry, and the bakery is pure chemistry. The amount of math that goes on in this room is almost as much as a math class. The students really work on it hard because they see the results. In math, which is very important, it’s very hard to see “why do I need to learn algebra, why do I need to learn this and that.” Well in here, they understand why they need to learn it, and I think the arts obviously go into making a well-rounded person as well.

WUFT: For a student interested in entering the culinary industry, what is your advice to them? What tips or suggestions do you have?

BD: The first thing I would tell them to do is to get a job in the industry. I don’t care if it’s as a dishwasher or a prep cook. I don’t care if it’s a server. What we see that’s so glamorous on TV, you never see anybody washing dishes, cleaning the grill, emptying the fryer — all the other things that go on. You don’t see that a huge part of this industry is making it look smooth no matter what happens in the kitchen, and working with people no matter what type of person it is. You’re there to make the guest happy, and you need to know if you have the personality.

Dylan is a reporter who can be contacted by calling 954-895-2738 or emailing ddixon@ufl.edu.
@@dylanrdixon
Previous 360 Video: UF Students Rally At Turlington Plaza Against Travel Ban And Wall
Next Florida Officials, Voters Clash Over Medical Marijuana Rules