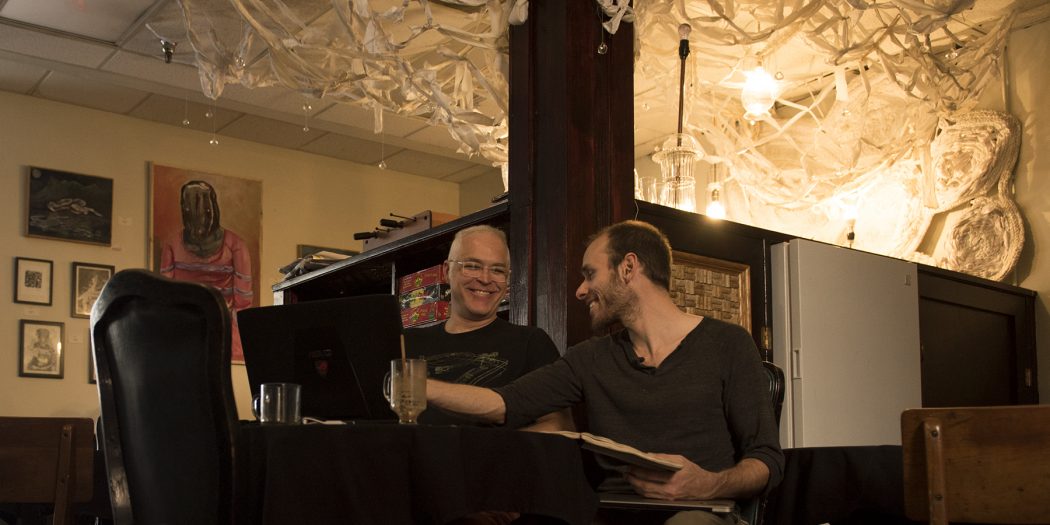 Mat Chandler, the owner of Aurora Healing Arts center in Gainesville, meets with architect Stephen Bender at Maude's Classic Cafe to discuss plans for a new float center on February 7, 2017. Chandler hopes to raise $128,000 from a crowdfunding campaign and open the new float center in August.

Mat Chandler has floated at major cities in New York, California, and Washington.

Now, he wants to float in Gainesville.

“This is something that meets most people where they’re at,” said Chandler, the owner of Aurora Healing Arts. “You don’t have to be into yoga or meditation to appreciate floating. You can be anyone from a lawyer to a businessperson to a doctor.”

Chandler is building a center in Gainesville dedicated to floating – a sensory deprivation therapy. The center, which will have a cafe and will use repurposed shipping containers as rooms for the floating pods, will be located at Aurora Healing Arts.

Chandler said the center will provide an alternative to the centers in Jacksonville and Orlando. It will open in August – funded by the $128,000 he hopes to raise through a crowdfunding campaign, he said.

The 35-day campaign will launch on Indiegogo on Feb. 25, Chandler said. Donors will receive a discount on a float session for their donations.

A typical session involves laying in a dark pod filled with water and over 800 lbs. of medical-grade Epsom salts – a mix that allows someone to float effortlessly on top.

“You have no light, no sounds, no smell or taste,” Chandler said. “The water is the same temperature as your skin, so you don’t feel it. It’s like you’re in zero gravity.”

“I’ve wanted to do it for years,” Pettigrew said. “So I can’t wait to finally see what it’s all about.”

Pettigrew said she also plans to refer her patients to the float center once it opens.

“A lot of what patients are looking for through acupuncture crosses over to floating,” Pettigrew said. “So I can’t wait to donate to this and help make Gainesville an even bigger center for healing and progressive medicine.”

Ariana Aragon, a director of public relations for the float center, said she’s excited for Gainesville to join the ranks of forward-thinking cities with float centers.

“The new center reaffirms that this city is one of the most interesting places to be right now,” Aragon said. “This will be part of a new wave of curiosity and relaxation.”

Aragon said she floated for the first time a few months ago, and it was unlike anything else she’s experienced.

“I really think this will bring new life to Gainesville,” Aragon said.

For updates on the float center, visit www.floatgnv.com.