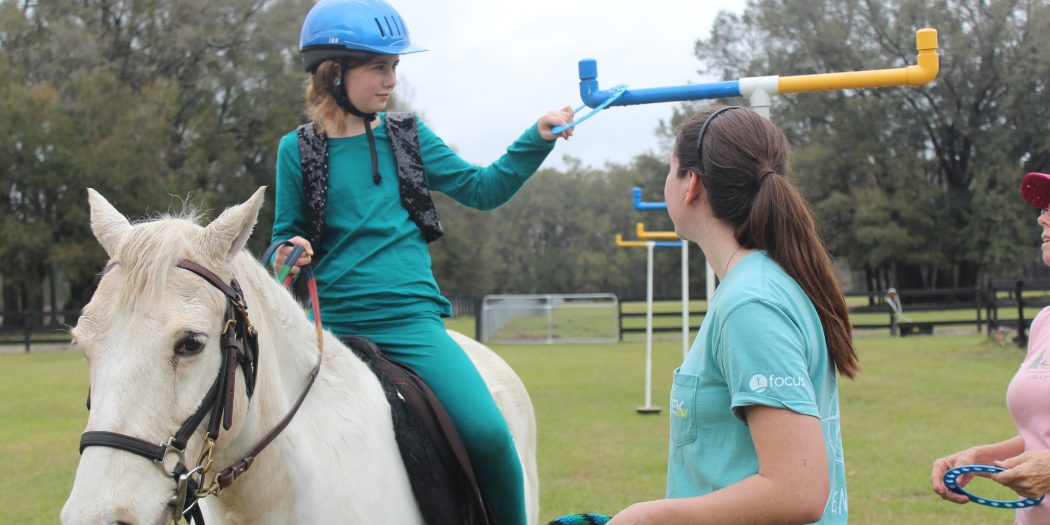 “I’m coming Sonny,” she said, as she went to grab another brush.

Gibbs, 11, has been receiving therapy at Horses Helping People, or HOPE, an equine-assisted therapy program in Alachua County, for about three years.

Toni Gibbs, Crystal’s mother, said being with the horses has really helped with Crystal’s autism.

“A lot of her physical ticks I don’t see anymore; she doesn’t have meltdowns really anymore and her social interactions are a lot better,” Gibbs said. “She’s interacting with peers; she’s still a little more to herself but she’s a lot better.”

Saturday will be the first time Crystal, along with five other patients at HOPE, will compete at the Florida Special Olympics.

Crystal comes to HOPE, 9722 SW. 153rd Ave., every Wednesday for her therapy sessions, and now to practice for the Olympics. She will compete in two different events on Saturday.

While participates in a lot of different equine-related activities, Crystal said her favorite thing to do during therapy is trotting because she likes to go fast.

Cathi Brown co-founded HOPE, a non-profit organization focusing on enriching the lives of individuals with disabilities, in July 2000. She has been doing equine-assisted therapy for about 15 years.

Brown said the upcoming Special Olympics is going to be great for her patients and will help with a lot of different aspects of their disabilities.

“I think competition is good for everybody,” Brown said.  “Thinking about social skills and awareness and all the things that happen while you’re there, too. Engaging with each other and seeing other people like you.”

Competing in the Special Olympics will also increase her patients’ confidence, Brown said. “Being successful at something when they’re usually the kid that’s not successful is good for them,” she said.

Although Brown said most of her riders are excited to be going to the Special Olympics, but don’t really care how they do, Henry Fipps said he wants to win.

The 65-year-old is the oldest rider going to the Special Olympics with HOPE.  He has been riding horses for years, but has been going to HOPE for therapy for a few months.

Fipps suffers from an intellectual disability and riding horses has allowed him to improve. The fact that he is able to remember the patterns of the courses shows just how much progress he has made, his instructor said.

When asked why he enjoys riding horses so much, his answer was simple.

The equestrian portion of the Florida Special Olympics will be held from 8 a.m to 4 p.m. at the Stirrups ‘n Strides Therapeutic Riding Center in Citra, Florida.