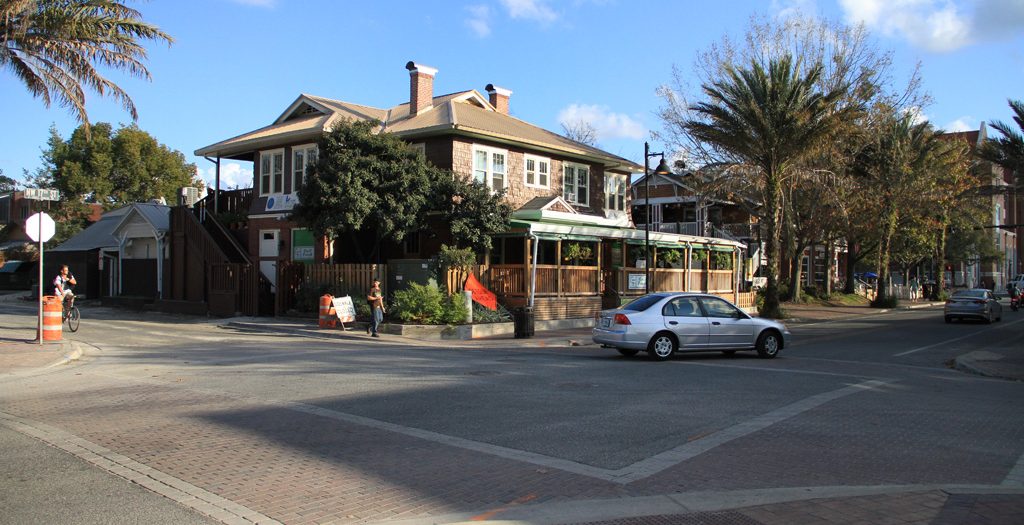 The City of Gainesville is prepared to work with the Students for the New Urbanism at UF to paint crosswalk art that will enhance the beauty of the city while improving pedestrian safety.

Ethan Hudgins, architecture senator at the University of Florida and sustainability and the built environment major, and Brett Oehrle, District B student senator and public relations major, are at the helm of the proposed project.  Through consistent efforts to move the project forward by the student senators, the crosswalk art project is coming to fruition after a period of delay.

Within the next three months, the Students for the New Urbanism plan to start painting crosswalk art. Gainesville city intersections located in downtown and midtown are possible locations for crosswalk art due to their high levels of foot traffic.

For example, one intersection that could expect crosswalk art is NW First Street and First Avenue, next to Grill Fresh and Flaco’s Cuban Bakery.

The Students for the New Urbanism state that crosswalk art can act as a traffic-calming device for busy intersections with a lot of foot and automobile traffic. The interesting designs help attract more attention from commuters and draw them into appreciating the crosswalk as a pedestrian space.

“Encouraging walkability is a huge cornerstone of what we do,” Hudgins said.

Dr. Kyle Shelton, director of strategic partnerships at the Kinder Institute for Urban Research at Rice University, agrees that crosswalk art can contribute to pedestrian safety. Anything that makes drivers less comfortable with what they are seeing makes them pay more attention, Shelton said.

Shelton also cited additional benefits of crosswalk art within his report “Rice Village: Parking, Management and the Built Environment,” such as how it functions as a form of public art.

According to Shelton, Portland is a great example of this, as they use the yearly painting of crosswalks as a “city night out,” with the art serving as a source of pride. It’s a win-win situation where the safety of the city is improved while something of visual value is provided, he said.

The volunteer staff will have to paint at the intersection of two city streets, the public works departments must approve the locations in advance, volunteers must provide their own maintenance of traffic, volunteers must be wearing OSHA/ANSI-approved safety equipment to work, and the painting must be performed in off-peak travel times.

Mann also stated he will assign someone in the traffic operations division to work with the Students for the New Urbanism when the organization is ready to proceed.

The Students for the New Urbanism will have submitted the formal proposal to the City of Gainesville by Tuesday at the latest, Hudgins said. After a committee meeting and vote by the commission, the project will begin with a pilot art crosswalk painted at around the end of the semester in April.

The senators are confident the project will start in a relatively smooth manner due to previous interactions with the city discussing the art crosswalk project. Oehrle said at the moment he sees no reason why the project would not move forward.

The project will cost $300 to $500 to complete, covering the cost of equipment such as reflective vests, rollers and paint. Oehrle is reaching out to UF Student Government to find funds, as well as College of the Arts at the University of Florida for possible volunteers.

“We always partner with UF and the student organizations and try to bring their wishes to fruition if it’s possible and it doesn’t cause any undue harm to the public or create any safety issues,” Skinner said.

As for why Oehrle wants the project to go through, he wants to leave a positive impact in Gainesville.

Samuel is a reporter for WUFT News who may be contacted by calling 352-392-6397 or emailing news @wuft.org
Previous Florida CFO Jeff Atwater Resigning After 2017 Session
Next Cohousing Community Brings Cooperative Living To Gainesville

In August, the City Commission adopted an ordinance requiring businesses to install retention systems to keep their shopping carts from being discarded in the community.