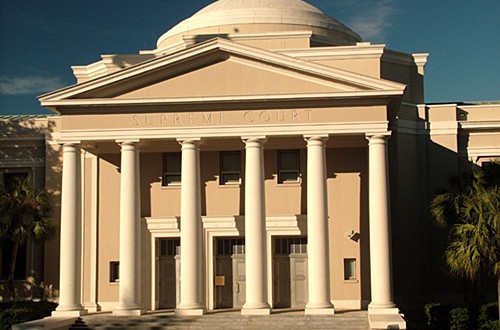 The Florida Supreme Court building in Tallahassee. Under a measure (HJR 1) approved by a House panel today, Sunshine States residents would vote on a 12-year term limit for all Supreme Court justices and appeals court judges. (Mark Goebel/Creative Commons)

TALLAHASSEE — A push by House Speaker Richard Corcoran to limit how long top judges can remain on the bench is moving in the Florida House.

A divided House panel approved a measure (HJR 1) today that would ask the state’s voters to approve a 12-year term limit for all Supreme Court justices and appeals court judges. If passed by the Florida Legislature, it would go before voters in 2018.

But opponents say the amendment would undercut the independence of the judicial branch and argued it would lead to less people seeking to become judges.

The Associated Press is a wire service to which WUFT News subscribes.
Previous Feb. 9, 2017: Morning News In 90
Next Police Arrest Suspect In Gainesville Chevron Robbery