AnnaRose is a typical 12-year-old girl. She loves to play video games, chat with friends online and go outside. She also loves to dance with her dog, Luna.

In the weeks before her heart transplant, AnnaRose would dance around UF Health Shands Hospital. Three years later, the music doesn’t seem to be stopping anytime soon.

Every patient who received a new heart during that period survived his or her first year after surgery, according to UF Health.

This patient survival rate is the best in the nation for pediatric heart transplant programs, according to a Scientific Registry of Transplant Recipients report released in January.

Dr. Jay Fricker, a pediatric cardiology specialist at Shands, said good outcomes come naturally when a hospital has a passionate team and a good system in place.

“When you see these kids go from near-death to being able to walk out of this hospital with the potential for a higher quality and longer life, that is what makes you do what you do,” Fricker said.

While the hospital staff is appreciative of the accolades coming from the report, Fricker said the next step is to never stop learning.

“We just have to keep moving on,” Fricker said. “We have to learn more about transplantation, more about immune suppression and doing the next innovative thing when it comes to taking care of children.”

Cean Van Sciver, AnnaRose’s mother, was not surprised about Shand’s successful pediatric transplant rate. “They were wonderful,” Van Sciver said. “The doctors were all very helpful.”

Her daughter spent 10 months waiting before she eventually received her transplant.

“We watched her go from her happy self to very sick and laying around, not doing anything,” Van Sciver said.

Van Sciver said that the day after surgery, however, AnnaRose was back to being herself. AnnaRose and her mom still visit the nurses that worked with them and have since moved closer to the hospital because they feel so comfortable with the doctors.

Now, AnnaRose is lively and energetic and said one of the best things about her new heart is that she can run with the other kids.

“I was far behind the other kids before I got the transplant,” she said. “I’m almost faster than them now.”

AnnaRose said she is thankful for UF Health Shands Hospital.

“They kept me alive.”

Tyler Wilson is a reporter at WUFT News. He can be reached at (407)-492-1422 and at tylerw18@ufl.edu.
Previous State Regulators Begin Medical Marijuana Listening Tour In Jacksonville
Next Bear Found In Williston Backyard Leaves Residents Cautious 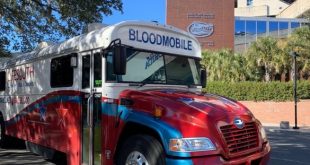