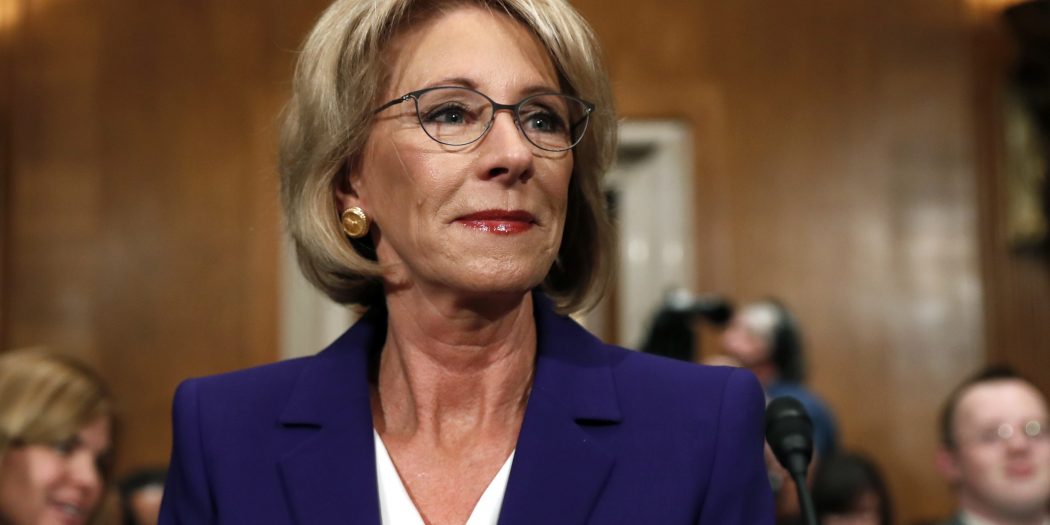 Jenny Hill helps run a charter school, but she was concerned when she realized Betsy DeVos would be the next Secretary of Education.

“I don’t think Best DeVos overall is going to have a positive impact on education in America,” said Hill, co-director of Resilience Charter School.

On Tuesday, the U.S. Senate voted on DeVos, who is an advocate for charter schools and voucher programs that give money to families for private-school tuition. The Senate vote ended 50 to 50, but Vice President Mike Pence broke the tie to confirm DeVos, the first time a vice president had to do so.

DeVos has never worked or attended a public school, according to the The New York Times. The billionaire is a former Michigan Republican party chairwoman and has long campaigned for education reform.

Hill acknowledged that DeVos’ stance on increasing funding for charter schools would help the programs, but she said it wouldn’t help education as a whole.

“I don’t think that charter schools should be receiving any more funding than a traditional public school,” she said. “They also need to be held to the same high standards that the rest of the schools in the district are held to.”

She said most charter schools in Gainesville aren’t run by for-profit companies. While there’s debate that charter schools can drain funds from public institutions and provide a lower quality of education, Hill says it doesn’t have to be that way with proper regulations.

“I do believe that school choice can be an effective piece of our public school system,” she said. “We’re just providing a smaller alternative approach to education that just works better for some students.”

“We have to struggle to do a lot of things,” said Lowe-Phillips. “We definitely could use any amount of funding that the state could help with.”

Lowe-Phillips, 38, would like to believe DeVos would help programs like hers, she’s not convinced she’s the right woman for the job.

“It seems it would be better to nominate someone who would be in charge of the education system in America to have more experience in the actual school system,” she said.

Despite her reservations about DeVos, Lowe-Phillips said she supports DeVos’ stance that parents should be able to choose the best schools for their children.

Alachua County School Board Member Rob Hyatt said his opposition to DeVos is less about philosophies regarding how schools are organized, and more about her lack of experience.

“As a lifelong educator, as a product of public schools and public university, I’m saddened and disappointed,’ Hyatt said. “She has no grasp of the federal role in education.”

Hyatt said he hopes for the best with DeVos’ appointment and that her policies don’t negatively affect Florida or Alachua County.

“In Florida, we rank quite low in what we spend on education,” he said. “We don’t do a good job. If we’re going to lessen that then it’s going to be more of a problem.”

Jackie Johnson, Alacha County Public Schools spokeswoman, said that while there are concerns about DeVos from educators across the county, the School Board hadn’t taken a public stance on her nomination.

“I think our major concern is wanting to know for sure that we have a candidate who’s interested in strengthening public schools, not dismantling them,” she said.

Mark Pudlow, a spokesperson for the Florida Educators Association, said since some of DeVos’ policies regarding voucher programs and charter schools can already be seen in Florida, other states will be more affected when she takes office.

“Right now i think that’ll just reinforce things in Florida,” he said. “We don’t think she’ll be good for the country.”

Pudlow said with the current political climate since President Donald Trump took office, the union is preparing to fight against any of DeVos’ policies they view as harmful.

“We’ve seen in just two and a half short weeks that the Trump administration seems to want to do everything it can to disrupt, create chaos in government agencies,” he said. “We think children’s public education is too important for them to be playing games with.”

Katelyn Newberg is a reporter for WUFT news. She can be reached at knewberg@ufl.edu, on her cell phone at 407-766-2820 or on Twitter @k_newberg.
@@k_newberg
Previous Former Gainesville Mayor Perry McGriff Jr.’s Life Remembered
Next Feb. 8, 2017: Morning News In 90