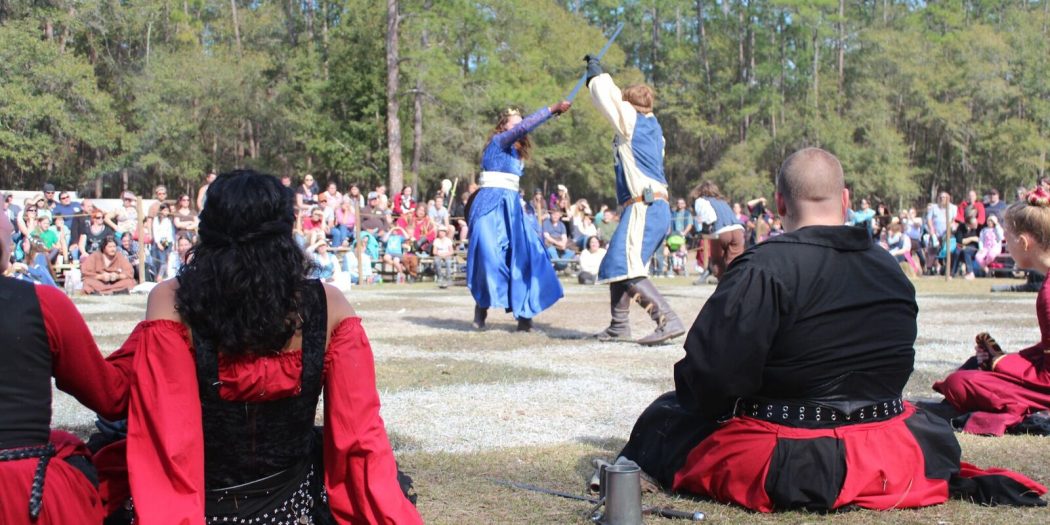 Two members of the Thieves Guilde battle on the chess board in the Tournament of Grievances. The tournament was filled with choreographed battles and colorful characters, and there was never a shortage of grievances that needed to be aired.(Teal Garth/WUFT News)

The Hoggetowne Medieval Faire celebrated its 31st anniversary this year with nine stages for entertainment, over 160 artisan and food booths and thousands of medieval enthusiasts in attendance. The faire took place at the Alachua County Fairgrounds over two consecutive weekends on Jan. 28 and 29 and Feb. 3, 4 and 5, and attracted the attention of people young and old, local and out-of-town, and modern and medieval.

Thirty-one years ago, Hoggetowne started as a free, one-day event held at The Thomas Center in Gainesville.

“What was once a very small garden event has turned into this huge event where we take over the Alachua County Fairgrounds and transform it into medieval village,” said Sunny Andrei, faire director.

It’s clear that a lot has changed over the years. Artisans and performers showcased their skills, the food and drink was plentiful, and the crowds, whether dressed in their best costumes or in a T-shirt and jeans, had a wide selection of attractions to keep them satisfied and in the medieval mood.

Teal Garth is a reporter for WUFT News and can be reached at tealgarth@gmail.com or 850-380-1366.
Previous Alachua County Crossing Guards Recognized For Work
Next Women’s March Gainesville Looks To Next Steps