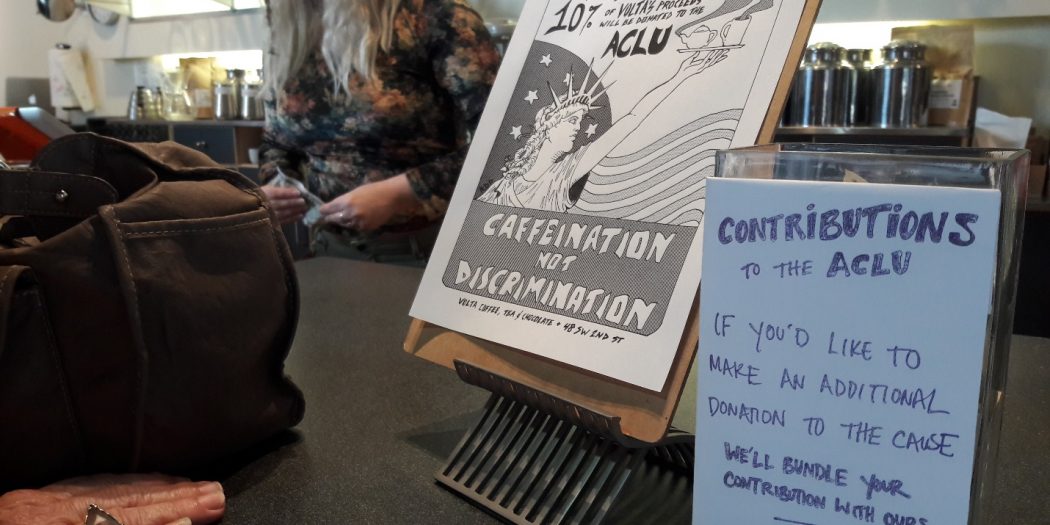 Volta Coffee used the term “Caffeination Not Discrimination” as their slogan for the ACLU fundraiser. (Ramsey Touchberry/WUFT News)

Volta Coffee, Tea & Chocolate in Gainesville is donating 10 percent of their sales from this weekend, totaling $800, to the Florida chapter of the American Civil Liberties Union (ACLU).

Hundreds of coffee shops nationwide participated in a Friday through Sunday fundraiser to raise money for the ACLU in response to President Trump’s recent travel ban on seven Middle Eastern and African countries.

Volta was one of only five coffee shops in the state to participate. The others were in Tallahassee, Tampa and Miami.

Anthony Rue, owner of Volta Coffee, said he consulted with coffee shops across the country, from Los Angeles to New York, before making his decision.

“The more I thought about it, the more I saw that there were so many people in the coffee community who had really compelling reasons as to why we should get involved,” Rue said. “The history of coffee is the history of crossing borders between Muslim and Christian countries and between North and South America and between immigrants and trading partners across borders.”

For Rue, it wasn’t just about a personal disagreement with the president’s new policies. It was about his livelihood as well.

Over the years, Rue said he’s employed Cuban and Iranian immigrants, as well as children of immigrants from Bolivia, Uruguay, Argentina, Spain, Italy and Thailand.

The nationwide movement among coffee shops was started by Sprudge, a coffee-news website. According to their website, more than 450 brands and more than 800 cafes in 41 states participated.

“We believe that the current executive order banning refugees from the United States and immigration from seven majority-Muslim nations is illegal, immoral and fundamentally un-American,” according to a statement on Sprudge’s website. “Like a hot mug of drip coffee spilled on a crisp white apron, these actions are a dark stain on our national conscience, and as Americans, we feel compelled to stand up against them.”

Both Sprudge and Rue said they aren’t political with their businesses. Rue said he’s donated to various causes over the years, but never a political one. In fact, Rue didn’t think of it as political.

“There are various cultural norms that are being thrown out. The ACLU is nonpartisan. Their fundamental roles as lawyers is to try and defend constitutional issues,” Rue said. “They consider themselves nonpartisan. We consider this to be nonpartisan.”

Rue said he received positive support throughout the community. His sales were up 25 percent on Friday and he said people all the way from Jacksonville drove down in support since there were no shops in that area participating.

His tea supplier, Kilogram, also contributed $200 when they found out Volta joined the movement (which is included in the $800 raised). Rue said that kind of support was unprecedented and had never happened to Volta in its nine years of business.

“This is the type of person he is,” said long-time customer Brenda Bayne, who’s come to Volta for the past eight years and has gotten to know Rue. “This doesn’t surprise me at all. I wouldn’t expect any less of him.”

Ramsey is a reporter for WUFT who can be reached by calling 352-392-6397 or emailing news@wuft.org.
Previous Human Remains Found In Marion County Identified
Next “You’re My Neighbor”: Local Organization Promotes Inclusiveness With Yard Signs