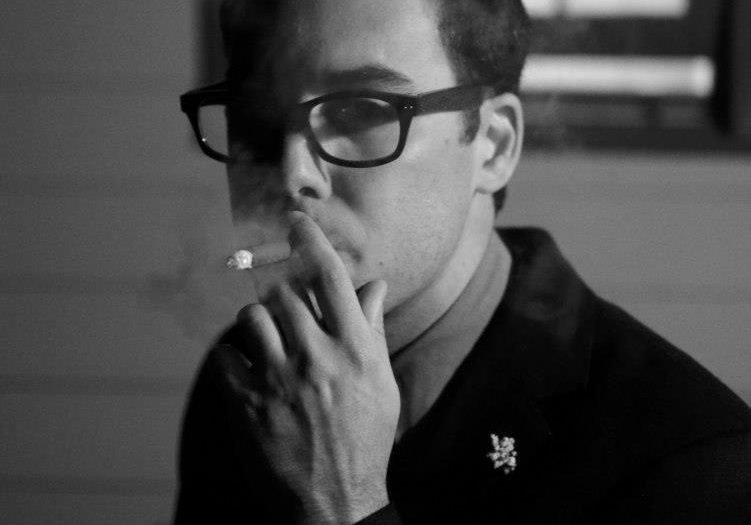 Author and Musician Travis Atria poses for the camera. He said writing a biography is a combination of fiction writing and journalism. (Photo courtesy Travis Atria)

Travis Atria is a University of Florida graduate who spent most of his spare time in college working on his music. As the lead singer of multiple bands, including The Shitty Beatles and Morningbell, Atria would play music at the local clubs in Gainesville, Florida, while working on his master’s degree in journalism. Since leaving Gainesville, Atria moved to New York and began his writing career. Last October, he co-authored a biography on Curtis Mayfield, a soul singer who was prominent during the civil rights era. He is now working on a new book: a biography on Arthur Briggs, a trumpet player who was imprisoned by the Nazis during World War II.

WUFT: You have been playing music pretty much your whole life, and were in some pretty popular local bands in Gainesville. What inspired you to start writing books?

TA: I’ve always wanted to write books. I was interested in books and writing before I was interested in music. I tried to write my first book when I was about 7 years old. It was called “The First Day Of Baseball,” and I wrote it on index cards. Before I learned how to read, I used to just pretend to read books, just turn the pages every once in a while, to make people think that I could read. Some of my best times as a child were getting absolutely, completely lost in books, in a way that I find impossible as an adult. It’s kind of sad. It’s like you lose some part of your imagination the older you get.

WUFT: Your first book was a biography about Curtis Mayfield, a socially conscious musician who was prominent during the civil rights era. You co-authored the book with his son Todd Mayfield. What was that process like?

TA: It was difficult. It was exciting. It was frustrating. It was everything. It took 7 years and it often felt like it was never going to get done, especially the first 2 years before I met Todd. I was just doing it by myself and trying to make it happen, and not really having any idea how. It was not an easy thing because I had never written a book before and I didn’t know what I was doing. I think it’s a lot like making an album. The first album we made, I didn’t know what the hell I was doing, but I had a lot of passion for it and I think I came through. I think I feel the same way about books. I’m hoping I get better at them.

WUFT: Your next biography is about Arthur Briggs, a trumpet player from the Caribbean who went to Europe, where he was eventually put into a Nazi prison camp during World War II. You were recently in Paris doing research for this book. What was that experience like?

TA: It was great and scary and everything. I felt like I was failing the whole time. But that to me is the most fun part about writing – the researching. And I think, in a way, what I’m doing is kind of a combination of the three things I wanted to do as a child: archaeologist, writer and musician. I’m writing about music, but I have to uncover stuff. I have to dig really deep, especially with this guy. With Curtis it was the same, but he was much more famous and much more recent in America, so it wasn’t as hard to find information. But with this guy, it’s really like chasing down every single little loose end I can find. Every little piece of information about him is precious, because there’s so few.

WUFT: There appears to be a trend in the type of books you set out to write. Why do you think it’s important to write about some of these more obscure, lesser-known musicians?

TA: For the Curtis book, it was just because I saw a pretty huge hole that had not been filled. An artist of that caliber to have nothing written about him, I knew that I could get my foot in the door that way. With Arthur Briggs, it’s less because of his music as it is because of his story. I think his story is important. I’m drawn to people, I guess musicians especially, but people in general who are fighting against injustice or have some sort of social consciousness. And I don’t know if Briggs necessarily did explicitly, but just his story alone, especially in the times we’re living in now. The story of a black man who was captured by Nazis and survived, even thrived one might say, in this camp, I think is a phenomenal story. We need to keep hearing stories about people who stand up to bull. That’s what draws me to it. They were examples, I think, of what can be done – what must be done.

WUFT: History tends to repeat itself. While doing research for the Mayfield and Briggs books, did you notice any social parallels between the different eras you’ve had to study, including our own?

TA: It’s kind of eerie. Maybe I’m making all this stuff happen by researching it, but while I was doing the Curtis research, that’s when all the “black lives matter” stuff was happening. I’m pretty well versed, from the start of slavery, through the civil rights, and I think up until today. When you study it, you see the same arguments being made, whether it’s slave-owners doing it, whether it’s just conservative white people in the ‘50s and ‘60s doing it, whether it’s people today on Facebook doing it. You see the same argument and the same wording to the arguments that they’re making, and it’s depressing in one way, because you realize how little changes.

WUFT: How has making music your whole life influenced the work you do now? Do you think your musical background has helped to make your work stronger?

TA: Absolutely. Writing and music are similar in the fact that they both rely on rhythm. Either way, you’re creating a rhythm in somebody else’s head, no matter which one you’re doing. I try to write words musically, or keep in mind the flow. The last paragraph in the Curtis Mayfield book is one of the things I’m most proud of writing. I feel that it is very musical. It has a definite cadence to it and a rhythm to it, and I worked a long time to get it right. So I think, had I not made music, I wouldn’t have that ear for that. Another thing I like to do is, while I’m writing, I like to listen to the music, either the music of the artist or the music of the period. Like when I was writing about Curtis’ grandmother’s life in Louisiana, I was listening to Robert Johnson and old blues music. Just trying to get the rhythm of the time of the people, I think that helps a little bit. It puts you in the mood while you’re writing.

WUFT: An article in “Rolling Stone” was written about your biography on Curtis Mayfield, and now you are in the midst of writing this book about Arthur Briggs. What advice do you have for other aspiring authors?

TA: I would say, first of all, have some other form of income. You need to have something else, because just writing books or just doing freelance journalism’s not going to pay the bills. And I think that’s something that people don’t really talk about a lot, but it’s something to know going into it, so you’re not shocked and surprised when you get out into the real world. Secondly, in terms of the actual work, I would say the things that have been the best for me is really studying what it is that I’m trying to do. Not just trying to do it, but reading other good biographies. Figuring out how they do it, how they structure it; how do they create the character, create the arch in the story. Really study the work.

Syama Allard is a reporter for WUFT news. He can be reached at 352-256-8749 and at sallard108@ufl.edu
@Syama Allard
Previous Q&A: Tracy Fanara, Gainesville’s Mythbuster
Next Study Connects Overeating During Sporting Events To Medical Problems