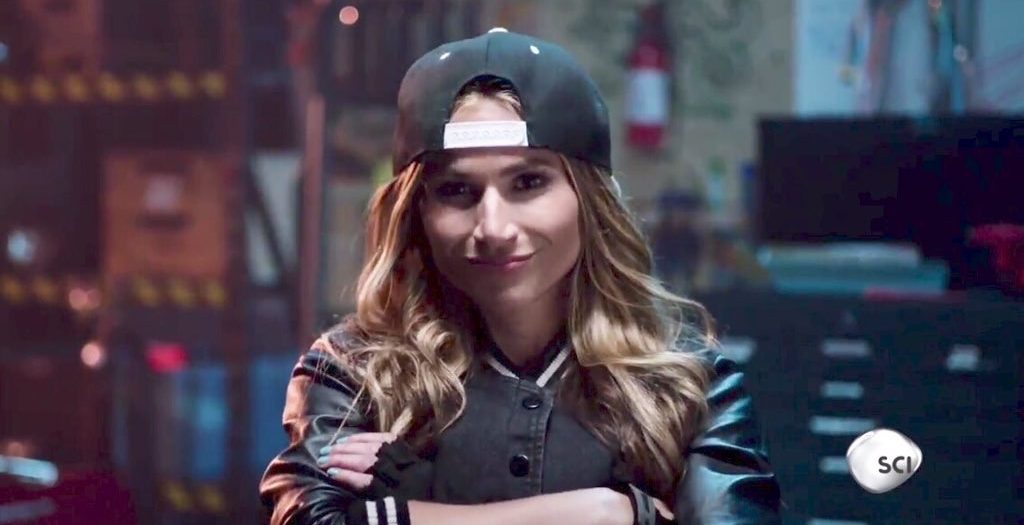 UF grad Tracy Fanara poses for the camera in a promotion for Mythbusters: The Search. Fanara is one of several contestants vying to be one of the new faces of the popular science show. (Courtesy Tracy Fanara)

Tracy Fanara went from the Swamp to the MythBusters lab, and she’s back in Gainesville to tell the tale. Fanara is a contestant on “MythBusters: The Search,” a spinoff of the original series dedicated to finding the new faces of MythBusters. The show, which is currently airing on the Science Channel, shows Fanara putting her three University of Florida degrees to the test. The TV star is living in Gainesville again while she awaits the results of the show.

WUFT: I notice that you interact with UF on Twitter, is that for a particular reason?

Tracy Fanara: Well, I got all three of my degrees from the University of Florida, so it’s my home. When I became part of the show, UF was very supportive, so that’s why we’ve been going back and forth [on Twitter]. A lot of my success is because of my time at the University of Florida, and I’m proud to be a Gator. As much as I can make that public or get the school out there, I do. Every intern that I have, I encourage to transfer [to UF]. And actually two have! I’m just a big fan of the school and the environmental engineering college.

WUFT: How long did you live in Gainesville?

TF: I’m actually living in Gainesville now. With the exception of living in New York City and Sarasota, I’ve probably lived here for a total of 11 years.

WUFT: I see that you have a B.S., M.E. and Ph.D from UF in environmental civil engineering, is that correct?

TF: Yes, that is correct.

WUFT: How would you say that UF prepared you for the show?

TF: UF gave me the background knowledge on civics and engineering to do the designs. I was the person that did all the calculations for each myth that we had on the show. Also, I was given the opportunity to teach classes and be in front of the classroom at UF.  I taught Intro to Engineering and it was a freshman course, so I had to really tone down the engineering talk and be able to explain science in a way that was relatable to someone just out of high school.

WUFT: How did you decide to go to UF? You weren’t originally from Florida, right?

TF: No, I wasn’t. My parents moved to Sarasota and once I had in-state tuition, I came to Gainesville. Honestly, the reason I wanted to go to Florida was because of the academic reputation. I originally wanted to study oceanography and I went to UF and they said, “No, that’s Florida State,” and I was like, “No, I’m not going to Florida State, I’m going to find something else.” So I had my transcripts in my hand and I went to every single college until I found someone that would let me in. And it ended up being environmental engineering, and I fell in love with it immediately.

WUFT: What advice would you give to UF students or even Gainesville residents who want to do what you did?

TF: I would say that they should just find their passion and work really, really hard for it. Figure out what they want, set it as a goal, and work toward milestones of that goal every single day.

WUFT: Shifting over to the MythBusters side, how did you get chosen for this particular show? I read that you didn’t actually submit your own video, is that correct?

TF: Yes, I think that somebody else actually submitted it for me. I’m not quite sure how it happened, but that’s another way that the University of Florida prepared me for MythBusters. The submitted video ended up being cut from my dissertation. In the portion that was cut, I did an environmental video at Lake Alice to show people where their storm water goes after rainfall hits pavement.

WUFT: Was MythBusters a show that you watched as a child?

TF: You know, it wasn’t. I had watched a couple episodes of it before, and I knew that I liked the premise of it. I love how it’s able to reach a broad demographic and inspire an interest in science through all age groups, political views, culture, etc. When they gave me a call, I knew that it was something that would be a lot of fun. You know, I do have a Ph.D in engineering, so calculations are important to me. The “MythBuster way” is build first, and figure out what should have been [the calculations] after. My whole mentality has always been: do the calculations first, so you know how you’re going to design and build something. So it was very different than the typical approach to engineering design.

WUFT: When did you film the show?

TF: We filmed August and September.

TF: Yes, that is correct. And the last four minutes of it are live; they have not chosen who wins yet.

WUFT: What would you say your favorite experiment was on the show, or at least one that has aired so far that you could tell me about?

WUFT: How was it working with the other contestants? Were they a lot different from you?

TF: Well, there were 10 type-A personalities. They were very talented in their own ways, and they were also very different from me. I’ve never met people like I did on that show. All my engineering friends have been design engineers, and there’s just a different mentality. The contestants were video game players and YouTube stars, and there was an actress and people who were fabricators. They were very different from my background. Two of the guys, Hackett and Martin, were TV stars. They have their own show.

WUFT: How weird was it to see yourself on TV?

WUFT: Have you ever done anything like that before, or anything in front of the camera?

TF:  Well, my position at Mote Marine Laboratory has me doing news reports a lot. So I’ve done stuff like that, but [the show] was different. And what was so nerve-racking about it was that you never know what they’re going to use. I was really hoping that some of my calculations would be in there, but there’s just so many people and so little time. And calculations aren’t very visual.

WUFT: Do you watch the episodes when they air?

TF: Yeah, I had a watch party at Saga downtown [Gainesville] for the first one. It was a lot of fun, a ton of people showed up. My friends even made T-shirts! Since then, it’s kind of nerve-racking every episode because I don’t know what’s going to come, so I’ve been more private watching the last three.

WUFT: What are you currently doing in Gainesville?

TF: I live here and subcontract for USGS (United States Geological Survey), but my full-time job is program manager of environmental health for Mote Marine Laboratory in Sarasota. So, I go down [to Sarasota] on Tuesday mornings and I come back on Thursday afternoons. I work from home the other two days.

WUFT: What would you say to the Gainesville community that’s rooting for you on the show?

TF: Thank you for all the support. I’ve never been more proud to be a Florida Gator and to represent the city of Gainesville. I love this town—it’s where my heart is. It’s where I grew up, and there’s no place in the world like it. To have the support of my new hometown really means a lot to me.

Brianna Wright is a reporter for WUFT. She is a third-year journalism major at the University of Florida with a minor in leadership. She can be reached at 321-750-2369 or bwright6@ufl.edu.
@briannawright0
Previous February: Teen Dating Violence Awareness Month
Next Q&A: Travis Atria, Rising Author And Musician