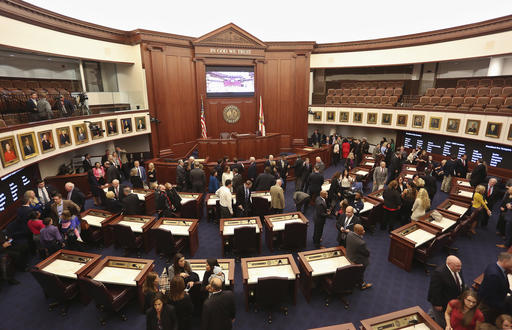 The Florida Senate will move forward next week with a proposal that would require all 12 state universities to adopt a “block” tuition policy by the fall of 2018.

The move to require undergraduates to pay a flat tuition rate per semester, rather than be billed on the current credit-hour basis, could be controversial. The state has had a block-tuition option for a number of years, yet none of the universities has adopted a plan.

The dilemma: how to move to a block-tuition system without financially penalizing students while at the same time providing incentives for them to take enough courses per semester to graduate in four years. Additionally, university leaders, who have held the line on tuition increases in recent years, don’t want to see a plan that would reduce their tuition revenues.

Senate President Joe Negron, a Stuart Republican who has made higher-education initiatives a top priority, said the Senate is still working on the details of its block-tuition proposal but that he believes a middle ground can be found.

The Senate Higher Education Appropriations Subcommittee on Wednesday will take up two bills (SB 2 and SB 4) that embody the bulk of Negron’s higher-education package, including the block tuition plan. But at this point, there are no specifics on the block-tuition proposal other than the mandate that each university adopt a plan.

Negron is advocating block tuition as part of an overall effort to get more Florida undergraduates to finish their baccalaureate degrees in four years, which means taking 120 credit hours of classes, averaging 15 credit hours for the fall and spring semesters or five three credit-hour classes in each semester.

One of the Senate bills (SB 2) includes a provision that will measure the performance of the 12 state universities based on a four-year graduation rate, rather than the current six-year rate. The bill sets the goal at 50 percent.

Based on the freshmen who entered state universities in the fall of 2011, the system averages 45 percent, according to the Board of Governors, which oversees the university system. The four-year graduation rate ranges from 67 percent at the University of Florida to 13.5 percent at Florida A&M University.

In comparison, many elite public universities have much higher four-year graduation rates, including the University of Virginia at 87 percent and the University of North Carolina at 81 percent, according to Senate analysts.

The measurement is not exact because some 18 percent of undergraduate degrees require more than 120 credit hours, which would result in more time.

Nonetheless, Negron and Gov. Rick Scott, who is backing a “save more, finish in four” proposal, both argue that students who linger in the universities are penalizing themselves by not moving on to careers or graduate schools.

Negron said he talked about the issue with university leaders and students when he visited Florida’s dozen university campuses in the spring.

“The university presidents told me to a person that they don’t like having fifth- and sixth-year people on campus in four-year programs,” Negron said. “That’s not the ideal. They would rather have students graduate in four years and go on with their lives and then bring in a new class.”

Negron said more revealing to him were his conversations with students, including those he interviewed on the University of Florida campus. Many told him they were taking 12 credit hours because they couldn’t afford the cost of another three credit-hour class, he said.

“What I heard is there are many students who graduate in five years because it costs them more to go from 12 (hours) to 15,” he said. “Ironically as a parent that’s a shortsighted decision because you’ve lost a year of income or you are going to graduate school.”

That’s where the developing block-tuition proposal could play a role.

Under one scenario, students could pay a flat rate representing what they pay now for 12 credit hours, yet they could take 15 credit hours, or if they were really ambitious and studious, 18 hours. It would provide financial savings, and incentives, to students who took more than 12 credit hours.

“I found it very compelling that students were making a choice based on the cost of three hours to extend their education by a year,” Negron said. “My goal is to say there should be no financial penalty for a student taking 15 hours.”

But the downside of that proposal is it would represent a major funding cut to the universities, essentially representing a 20 percent reduction for students who are paying for 12 credit hours but taking 15.

Another scenario, similar to a plan advanced by the University of Florida but abandoned in 2011, would have students pay for 15 credit hours with the option of taking up to 18 hours. It would discourage students from taking less than 15 hours per semester, since they would essentially be paying more for each credit hour if they only took 12 hours.

That proposal could draw opposition from students, and it could be interpreted as a tuition increase for many, which would run counter to Scott’s strong edict about raising tuition or fees at state universities and colleges.

Negron said he believes there is a way to make block tuition attractive for students and the universities, although the Senate has not settled on any solution yet.

He said one proposal under review would be to charge students for 30 credit hours each year but let them spread it over three semesters, the fall, spring and summer.

Negron said one of the goals of the Senate’s higher-education package is to resolve the issue of students taking fewer courses to save money.

“I am persuaded that there are thousands of students at our universities who are on 12 hours because of that cost differential,” Negron said. “Let’s figure out a way creatively to eliminate that, that doesn’t hurt the universities but also doesn’t penalize the students.”

The News Service of Florida is a wire service to which WUFT News subscribes.
Previous An Animal Rights Group Issues Complaint Against UF For Animal Abuse
Next Feb. 3, 2016: Morning News In 90

The University of Florida filed a dismissal to a complaint made by a former astronomy doctorate student in an ongoing lawsuit.