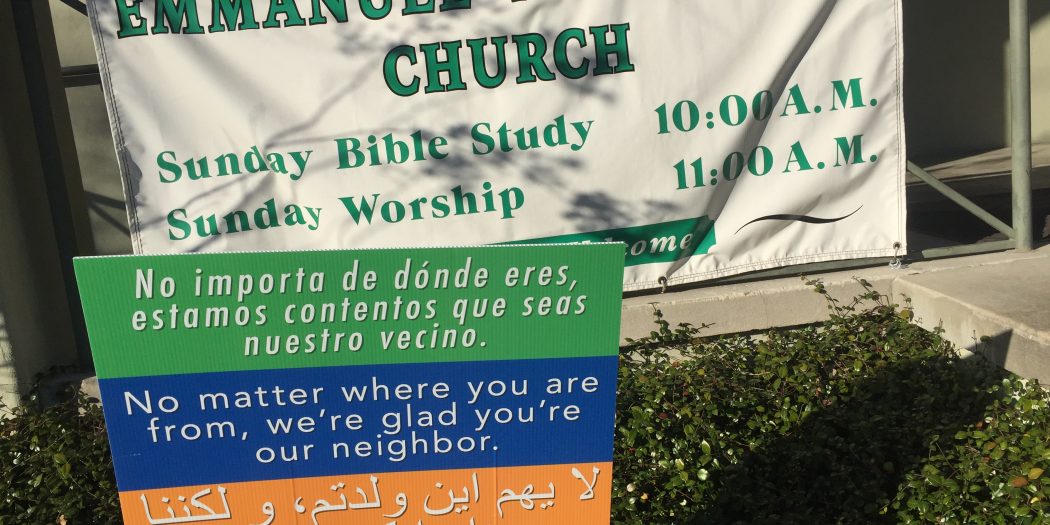 Welcoming Gainesville is selling these signs for $10 to raise awareness about Gainesville being an official welcoming city in association with the Welcoming America national non-profit organization.

Gainesville Bands Together Against Immigration Ban

“It has torn apart families, prevented students and employees from getting back to their studies and work,” said Sameer Saboungi, a Syrian-American former Gainesville resident.

The executive order, which was passed last Friday, has barred citizens from Syria, Yemen, Iran, Iraq, Libya, Sudan and Somalia from entering the U.S. for 90 days, according to the executive order transcript.

“I’ve been glued to my Facebook for days, watching the stream of stories that break your heart and make you feel angrier,” the 22-year-old said. “I can’t believe my country has reached this low of a level, and the fact that so many of my people are being dehumanized and humiliated in this way angers me.”

Saboungi is currently interning for an international NGO in Tunisia for six months. He says that his only concern in returning is secondary questioning.

“[I’m concerned about] being profiled for my place of descent, even though I was born and raised in America, and religion,” he said. “Beyond that, I don’t foresee any legal challenges that would bar or hinder me from coming back.”

Yet there have been reported accounts of green card holders and dual residents being detained. According to the executive order, those with green cards were initially barred, but clarifications are still in the works.

“There’s a lot of confusion,” said Robert Jacobs, a Gainesville immigration lawyer. “Everybody’s afraid, my phone has been ringing off the hook with calls from my Muslim clients.”

According to Jacobs, this executive order has created tremendous hardships for those who are from or have families in one of the seven nations listed. It also raises questions for the general immigrant population.

“It’s a very fluid situation,” Jacobs said about the interpretation and implementation of the executive order. “There’s nothing to really do but wait for clarifications. I’m kind of behind the eight-ball here trying to see what’s the best advice for each situation.”

Though the new law, commonly known as the “Muslim ban” to critics of the ban, seems to target the Islam religion, its creators and supporters insist it is formed around national security.

“It’s not religion, it’s more geographical,” said Saeed Khan, a member of Hoda, an Islamic Center in Gainesville. The professor and researcher in UF’s department of pathology thinks that the immigration ban was no surprise due to Trump’s campaign rhetoric.

Though the ban has disturbed many families, Khan says that it is heartening that so many people are acting against it.

“Listening to the news is exhausting,” Khan said. “But when you hear people it’s helpful. People feel like they’re not alone in this.”

As clarifications and parameters regarding the ban are still developing, Khan said there is not much one can do.

“I am always available to talk and support you,” he said. “The only thing you can do is talk about [these issues]. People have become very fearful of their Muslim neighbors.”

Khan recommends that anyone deeply affected by the ban should seek legal assistance and reach out to a nonprofit organization called Welcoming Gainesville.

The organization’s mission is to make the city welcoming towards immigrants, international students and refugees. To help combat the executive order’s reinforced stigma about Muslims, the local nonprofit is becoming a more prominent resource.

In front of the Emmanuel Mennonite Church, where Welcoming Gainesville resides, is a sign that reads “No matter where you are from, we’re glad you’re our neighbor,” in Spanish, English and Arabic.

After hearing about the ban, the organization is in the preliminary stages of structuring a few initiatives.

“We’re combating this largely with solidarity and inclusivity,” said Richard MacMaster, chairman of Welcoming Gainesville’s board of directors.

For community education, Welcoming Gainesville offers groups that focus on Christian and Muslim interaction and culture. Anyone in the community can participate.

Beyond their walls, the group is sharing resources and information obtained from national organizations such as Muslim Advocates, a legal advocacy and education organization.

Tonight, they plan also to organize a national initiative for action of solidarity during jummah prayer, the biggest prayer of the week in the Islam faith. Actions include praying, vigils and human chains with faith leaders and community allies.

“The community is not made of people who wants to drive Muslims out of the country,” MacMaster said. “We shouldn’t study our Muslim neighbors; don’t learn about them but learn from them.”

Gabriella is a reporter at WUFT news and can be reached at 21gabnun@gmail.com or 305-299-1075.
Previous UF Team Creates A Computer Model To Help Stroke Patients
Next Feb. 3, 2017: Afternoon News In 90