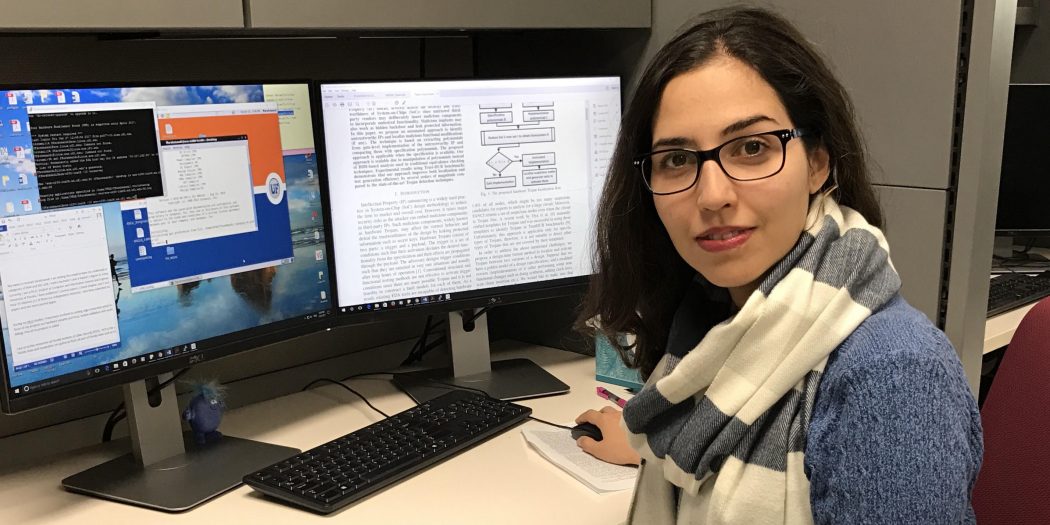 Farimah Farahmandi, a 28-year-old Iranian student pursuing a doctorate in cybersecurity, conducting research in her laboratory. Farahmandi said Trump's executive order on immigration has left her feeling isolated and fearful for the first time since she began studying at UF in 2013. (Courtesy of Farimah Farahmandi)

By Nate Phillips and Lena Schwallenberg

Farimah Farahmandi has not slept soundly in four days.

The 28-year-old Iranian student pursuing a doctorate in hardware security entered the United States on a visa. She has not seen her family in three-and-a-half years, and she does not know when she will see them next.

Farahmandi is one of 167 members of the University of Florida community who come from the seven Muslim-majority countries listed on President Trump’s immigration ban. Because these members hold neither green cards nor have permanent resident status, their future at UF, and within the U.S., remains unclear.

“Not only are we hearing bad news from the U.S., but we’re also hearing terrifying news from Iran,” Farahmandi said. “It’s like we don’t have a home — not here, and not in Iran.”

Of the 167 faculty, students and staff, 138 are from Iran, according to UF spokeswoman Janine Sikes.

Farahmandi said she feels isolated and scared for the first time since she began studying in Gainesville. Consumed with  thoughts about the future, she finds it difficult to focus on her research and daily life.

“We spend all our time looking at the news and browsing Facebook or CNN,” she said.

“I hope people realize that we are not terrorists or bad people — we are just people trying to study.”

Because her research involves searching for details about hardware security, she said she is worried about attracting government scrutiny.

Leonardo Villalón, dean of the International Center, advised Farahmandi to send emails to her adviser outlining her search history to generate a paper trail.

“It’s unfortunate that you have to take that extra step,” he said while facilitating a meeting Monday night intended to connect affected students, faculty and staff with UF officials and resources.

Villalón said he does not know what the future holds for international students, but he believes the prosperity of UF — and the U.S. — will rely on recruiting and supporting global talent.

“It’s extremely important to try and keep the doors open,” he said. “American universities need to be global universities.”

Dr. Ernesto Escoto, director of the Counseling and Wellness Center, urged affected students to seek counseling to help with anxiety as the situation progresses. Escoto said there has been a 6.7 percent increase in the number of active clients seeking counseling since Election Day compared to the same time period the previous year.

However, some students were more concerned about the legal implications of the executive order.

Jon Adcock, director of Student Legal Services, said immigration and naturalization cases are generally excluded from their services and that they often refer those cases to outside attorneys.

“We are not able to do much to help students individually in these situations,” Adcock wrote in an email. “We are supportive of the efforts of the International Center and trying to find other ways to be helpful.”

Villalón and other members of the International Center offered to help affected students find lawyers in the community who may be willing to work for free. He said that the center will do all it can to help students.

Bita Pour, a 29-year- old international graduate student, said the value of her work should not be determined by her nationality.

“We worked hard to be here,” she said. “We are highly educated people — we are adding value to this country, and we don’t deserve to be treated like this.”

Editor’s note: WUFT has updated the student’s research area in order to reflect it more accurately. It was previously mentioned as “national security” instead of “hardware security”.