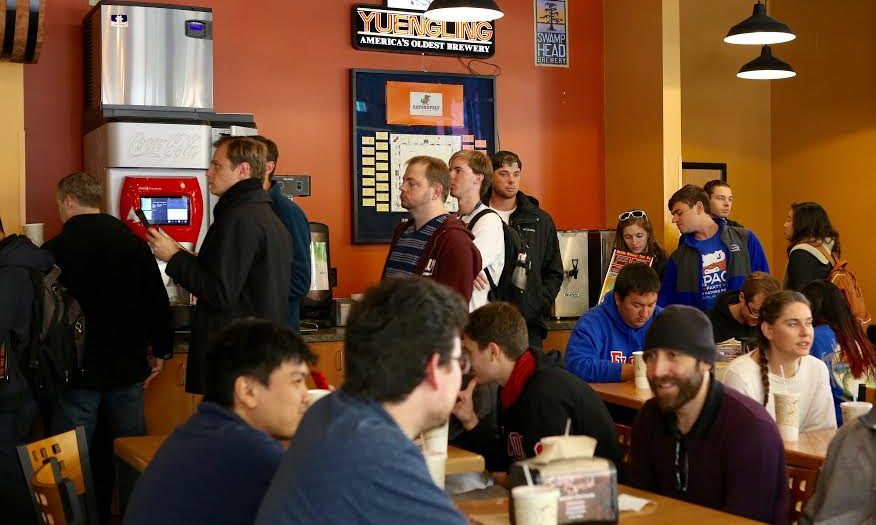 A line of customers waits for burritos and the famous red sauce at Burrito Brothers on Monday. Employees said they were swamped with more customers than usual because of the news spreading that the 40-year- old restaurant will be closing on Saturday. (Emma Green/WUFT News)

After two moves and 40 years of burritos and special red sauce, Burrito Brothers in Gainesville is shutting its doors.

Randy Akerson, the owner, posted a Facebook message Monday morning announcing that the Gainesville staple will be closing this Saturday, Feb. 4 due  in part to nearby construction of The Standard, a Landmark Properties apartment complex, as well as decreasing revenue.

“As we are taught by the Buddha (and also George Harrison), all things must pass. Everything that has a first day, must also inevitably have a last day as well. Next Saturday, February 4, will be the last day for Burrito Brothers. Some of you may have already heard this, as we gave our employees an early notice so that they could find other jobs, and the news inevitably leaked, but the rumors are true, and we are closing.”

Hundreds of loyal customers expressed their sympathy and anger online, but the line out of the door of Burrito Brothers on Monday just hours after Akerson’s post showed the true dedication of its customers.

Heather Steingraber, a UF College of Pharmacy staff member, munched on chips and reminisced with her friend about the good times she’d had at the restaurant. She used to go to the “hole-in-the-wall” location on 13th Street where customers were packed in like sardines.

While the burrito aficionado said she is happy with Burrito Brothers any way she can get it, she does believe that the push for development of University Avenue is to blame for pushing the restaurant out of business. She also said she thinks the lack of parking hindered the restaurant’s business.

“(Gainesville) doesn’t have the same feel,” Steingraber said. “It had more character before. It’s all big businesses [now].”

“It’s what I always get,” said the 19-year-old UF sophomore, who said he has been eating at the restaurant for as long as he can remember.

Employees at the restaurant helped the steady stream of customers to their favorite burritos and dozens of commemorative T-shirts.

Adam Mickler, a 23-year-old Santa Fe sophomore, sweated away at the stove for the hungry patrons. The mood in the back was comedic, he said, as cooks wondered where these customers were when their business was needed.

The four-year employee, who is now a manager at the restaurant, began as an inexperienced 18-year-old dishwasher making minimum wage.

“(The owners) kind of just took me under their wing,” Mickler said. “They literally gave me everything.”

Rising from a regular customer who would come to Burrito Brothers to cure his hangovers, Mickler worked his way up and into the hearts of owners Janet and Randy Akerson.

When he came into work on the day that Randy was sharing the somber news of Burrito Brothers closing, Mickler thought that somebody had died. Everyone was tearing up, and when he was told, he did too.

“It’s surreal. It’s not going to feel real until the doors are closed,” he said. “I just assumed that I’d always be working here as long as I was in Gainesville.”

Co-owner Janet Akerson said she is most upset about her 25 employees losing their jobs.

“It makes us terribly sad, but we tried really hard,” she said, citing two GoFundMe pages and a 40th birthday fundraiser for the restaurant in December. “We’re at peace with it because there’s nothing we can do.”

Janet says she has been reading what people are writing on her husband’s Facebook post and cries at the outpouring of love.

“We’ve had people coming in here for forty years,” she said, tears welling up in her eyes.

Burrito Brothers fans have already put in more than a 100 orders for frozen burritos to remember the taste of a Gainesville gone by, she said.

Staring out the window of her restaurant, Janet sees The Standard next door, a 10-story-tall construction site blowing dust in the direction of Burrito Brothers’ outdoor patio.

“I’m not happy with the direction my city is going,” she said, referring to the development of big chains and comparing the city to a younger Miami.

After emailing with developers of The Standard who said it wasn’t their fault for the small business’s dropping revenues, the Akersons decided not to pursue a lawsuit, estimated to cost them a minimum of $100,000. It was time to close, Randy concluded.

A 20 percent to 25 percent drop in revenues over six months was catastrophic for a small business like theirs, he said.

Randy said he mainly blames the construction of The Standard for his business failing. The impact of decreased parking and blocked roads was “instantaneous and obvious,” he said.

After repeated attempts at reaching out, WUFT News was unable to reach The Standard for comment.

“The dirt and dust created by a construction site is unbelievable. The noise is deafening. The smell of open sewers was appalling,” Randy said. “We tried to stick it out,” but the timing of Burrito Brothers’ second expansion in Midtown coinciding with the massive construction project next door was “absolutely as horrendous as it could possibly be.”

Randy echoed the sentiment expressed by his wife and many long-time customers: “Gainesville in general has lost its character.”

About two weeks ago, Randy said he weighed his options and decided to tell his employees that they should start looking for new jobs. They were grateful to have the heads-up.

“It was the last kindness I could do for them,” he said. “Neither they nor I thought a day would come that I wouldn’t have a job to give them.”

Danielle Vickery-Keating, a 38-year-old home health worker, could not have imagined a day when she wouldn’t be a customer at the restaurant either.

Vickery-Keating said she makes a stop in Gainesville on her way to Tampa every year specifically for the burritos and used to have frozen burritos and a half gallon of red sauce shipped to her in South Carolina.

“It was a little piece of Gainesville in your freezer,” she said.

She remembers going to the original location on 13th Street, where only four people could sit inside and the line always made its way out the door. The customers were consistent and frequent.

“It didn’t matter if it was cold or raining. You just went and got what you wanted,” Vickery-Keating said. “It’s just a little bit of heaven in your day.”

Emma Green is a reporter for WUFT News and can be reached at 305-965-0447 or greenemma@ufl.edu.
@twitter.com/emmaginable_
Previous Senate President Steps Down From Job At Florida Law Firm
Next UF Trustees Seek Better Handle On Shands Debt