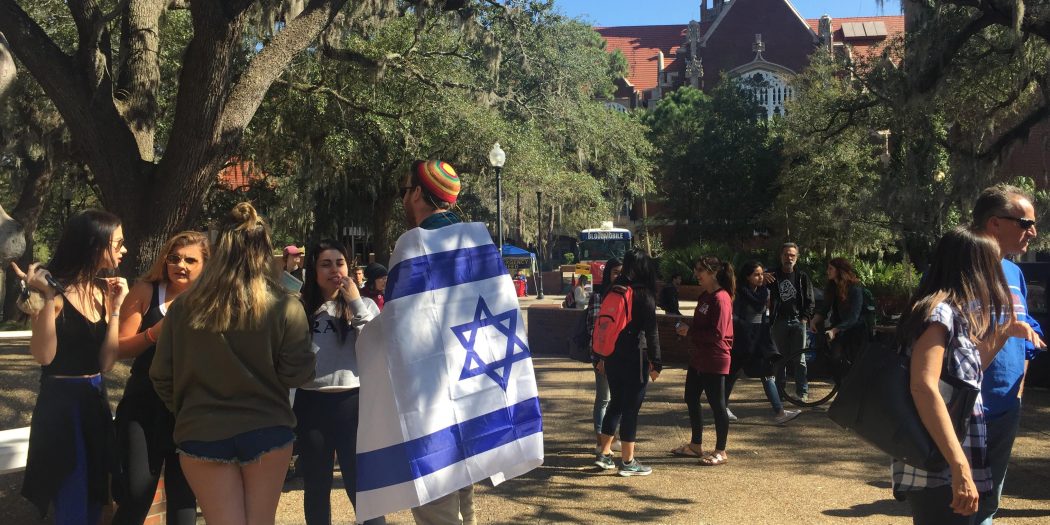 UF Students and faculty gather with religious leaders and the general public at the Liberation Rally in Turlington Plaza. Friday's rally was in commemoration of the 72nd anniversary of the liberation of Auschwitz. (Janine Wolf/WUFT News)

Another Swastika Wearer Spotted Near Rally To Commemorate Auschwitz Liberation

University of Florida students and faculty gathered with religious leaders Friday for the Liberation Rally, commemorating the 72nd anniversary of the liberation of the infamous Nazi concentration camp Auschwitz.

“This is a way for the Gator community to come together,” he said about the rally.

The event began at noon in the Turlington Plaza and kicked off with Ellman greeting the mass of people.

“Today isn’t a day about dwelling about negative activity,” he said. “Today is about celebrating, it’s about embracing who we are as a Gator community… I encourage each and every one of you to be a flower that blooms in adversity.”

“Evil is temporary,” Goldman said. “Goodness and kindness are forever.”

“Our Gator unity and our voices must continue to speak out,” Grossman said.

UF President Kent Fuchs also made an unexpected appearance at the event.

“Being university president is like being a rabbi, you never say ‘no’ when you get asked if you want to speak,” Fuchs said.

“As the university community, the way that we can displace the symbols of hate is not with hate, but with love,” he said. “I want to encourage those of you that have personal faith or have a cultural heritage to celebrate that.”

The rally ended with Julia Sabra, a UF student, leading the crowd on her guitar with a rendition of “Imagine” by John Lennon.

The event comes in light of recent events surrounding the presence of a man wearing a swastika armband. Michael Dewitz, 34, was first seen with the armband while riding a bicycle on university campus Tuesday.

Dewitz was attacked and stripped of the armband Thursday afternoon, shortly after a four-hour protest over his presence at UF that drew a crowd of 200-plus.

Today, people spotted a second man prominently featuring a swastika on his clothing strolling on UF’s campus. The man, identified as Roger Wiggins, was spotted with his walker wearing a black leather jacket with a large swastika symbol painted on the back.

Wiggins said he believes he has the right to express his opinion, claiming that he did not mean to confront anyone.

Janine Wolf is a reporter with WUFT News. She can be contacted by calling 407-928-6317 or emailing janinewolfj9@gmail.com.
@@janinewolfj9
Previous Officials Seek To Safen Streets For Gainesville Bicycle Riders And Pedestrians
Next Judge Says Trauma Center Shouldn’t Have Opened