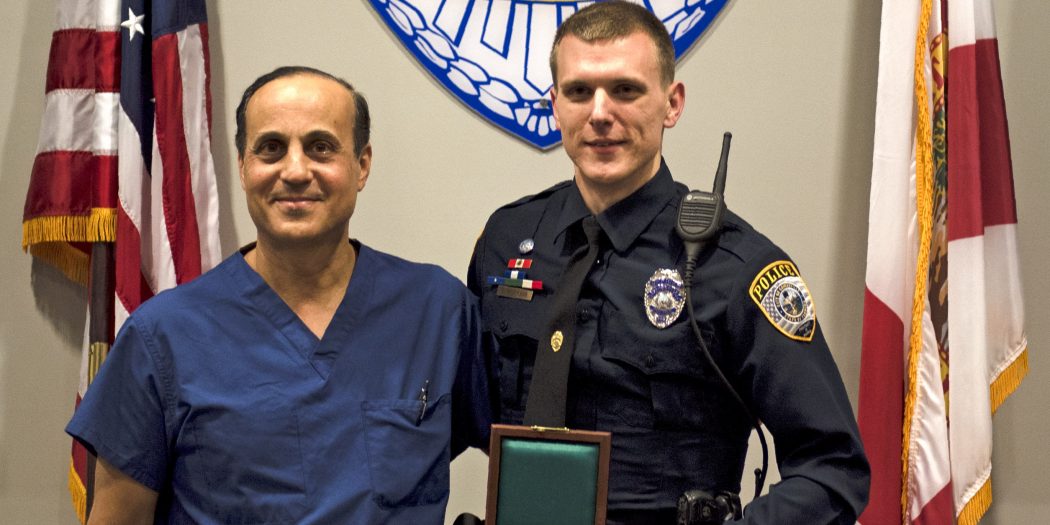 Officer Patrick Hopkins, with the Gainesville Police Department, holds his Carnegie Medal with Mark Moore, an anesthesiologist from Tallahassee and a former Carnegie Medal recipient at the GPD headquarters on January 25, 2017. Hopkins is among 93 people in the United States and Canada who received the medal in 2016 and the first Gainesville police officer to receive the award, according to GPD spokesman Ben Tobias. (Elle Beecher/WUFT News)

Loretta Foster lost everything in a house fire.

Her furniture, her clothes, her photo albums, her memories – but she did not lose her daughter Kimberly, a 33-year-old with Down’s Syndrome.

“I thought she was going to burn in that house,” Foster said. “I couldn’t get to her.”

Foster said she has many people to thank for saving her daughter’s life two years ago. But there is one person who risked his own life in the process: Officer Patrick Hopkins from the Gainesville Police Department.

When Hopkins and Cpl. Brett Kikendall arrived at the house that morning in June, they found a raging fire and Foster screaming for her baby: “My baby’s inside! My baby’s inside!”

“She was very frantic, as any mom would be,” Hopkins said. “I was thinking like it was my own kid inside. I had to go get the kid.”

Hopkins said, after seeing the walls of fire, he didn’t think anyone would be alive.

“But I made up my mind that I had to go in and get the baby,” Hopkins said.

The officers broke the glass from Kimberly’s bedroom window, and Kikendall pushed Hopkins through the window and into her room.

Hopkins said he crawled on the floor and the bed, reaching out with both arms to find Kimberly. He said his eyes burned with every blink and the thick cloud of smoke singed his throat.

It was eerily quiet.

Then he heard a cough.

“I moved towards it, reached around and found a foot,” Hopkins said.

But it wasn’t a baby’s foot.

“So now I’m thinking, ‘I found someone, that’s great,’” Hopkins said. “But I still think there’s a baby in the room.”

Kimberly was the baby.

“So I gave her a big bear hug and pushed her through the window,” Hopkins said. “She woke up when she got into the fresh air.”

After Hopkins was pulled out of the room, he said he immediately took off his gear, rinsed the window’s glass off his hands and caught his breath.

“That’s when it hit me,” Hopkins said. “Oh man, that really happened.”

Hopkins said he remembers one moment vividly: when Loretta Foster ran over to give him “the biggest hug ever.”

“Everything just froze for a minute,” Hopkins said.

This Wednesday, Hopkins received the Carnegie Medal for risking his life to save Kimberly that morning two years ago.

“It was surreal to get the medal,” Hopkins said. “It was something I did on the job, and they were nice enough to give it to me.”

“He sacrificed himself,” Tobias said. “This house was literally engulfed in flames but he could not rest until he went in that house.”

Loretta Foster said she will never forget Hopkins’ courage that night – and neither will Kimberly.

Elle Beecher is a reporter for WUFT News. She can be reached at: 954-296-0708, gabzo@ufl.edu, or @ellebeecher.
@@ellebeecher
Previous Jan. 27, 2017: Afternoon News in 90
Next Produce Truck Brings Healthy Options To Gainesville