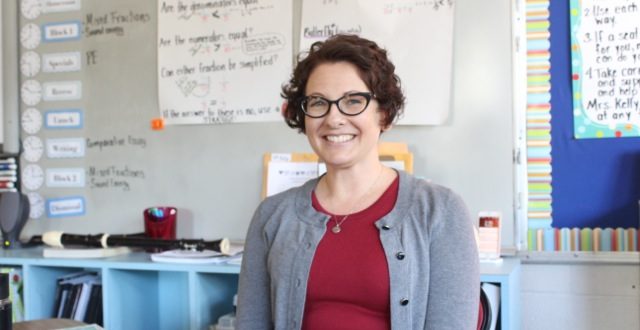 Jennifer Kelly, a fourth-grade teacher at Littlewood Elementary School in Gainesville, recently asked Mayor Lauren Poe to help get National School Choice Week declared as Gainesville Public School Week instead. Meanwhile, Florida charter and private schools are hosting open-house events as more parents across the nation are turning to such options over the public schools their children are zoned for. (Carly Breitbart/WUFT News)

D’eon Lewis has seen his classmates hit, curse and spit on their teacher at Williams Elementary School in Gainesville.

Every day, the 8-year-old’s mom, Erica Hall, said he “poured his little heart out” at the dinner table. She said that that’s when she knew she had to make a change.

“I felt like I was putting my son in positions to set himself up for the worst,” Hall said. “I started looking for other options of getting him into a better environment.”

The one she decided on: Boulware Springs Charter School.

So when a spot opened, Hall pulled D’eon out of Williams Elementary without a second thought.

Now, she said her son is flourishing. He loves his Spanish classes, his new friends and his excellent grades. He is proud to wear his school uniform in their neighborhood, Carver Gardens, which his mom calls “a bad neighborhood.”

“It’s like a small, tight-knit family” at Boulware, Hall said. “I love Boulware, I really do.”

Hall is one of a growing number of parents who are seeking an alternative to public schools their children are zoned for, shown by enrollment in public charter schools growing by 62 percent, according to the National Alliance for Charter Schools. The movement’s most prominent backer is perhaps Betsy DeVos, a billionaire philanthropist, Republican donor and President Donald Trump’s pick for secretary of education.

One Alachua County private school — Millhopper Montessori School — and others across Florida are riding the school-choice wave this week for National School Choice Week by hosting open houses throughout the week in hopes of recruiting parents.

“Everybody wants choice in their lives,” said Christina Miller, the school’s owner. “Why shouldn’t they have choice with the most important thing in their lives? And that’s their children.”

But public school teachers and supporters are pushing back, saying that opening up school choice would diminish the quality of public schools and take away the diversity within them.

“The recognition of school choice is a recognition of a system that is attempting to dismantle our public school system,” Jennifer Kelly, a fourth-grade teacher at Littlewood Elementary in Gainesville, wrote in an email to the city’s mayor, Lauren Poe.

In the email, she asked that Poe and the full city commission use a proclamation to declare this week Gainesville Public Schools Week instead.

The commission isn’t able to make an official proclamation in time for the week because the next meeting won’t happen until February, Poe said in his response.

In the response, Poe didn’t indicate if he would support such a proclamation, and he couldn’t immediately be reached Thursday.

Kelly said she plans to try again next year and will email the mayor several weeks in advance.

Kelly, who has taught in Alachua County Public Schools for 14 years, said that when parents reject public schools in favor of a charter or private school, they take a piece of government funding with them — through tuition vouchers for private schools and direct funding for charter ones.

“Vouchers are leading to the privatization of schools,” said Kelly, whose husband teaches fifth grade at Littlewood Elementary, where their 4-year-old will soon attend.

In a perfect world, students would go to the school they are zoned for, and they would get the best possible education because that school would be fully funded, Kelly said.

“Your school would be good,” she said, “because it would have enough funding to have a great curriculum and have music, art, and PE, and media, and a guidance counselor.”

Kelly said she champions the public school system because it cannot turn a student away, regardless of disability, first language or behavioral problems.

“It’s equal education for all students,” she said. “I want my daughter to be able to see different abilities, varying exceptionalities, different races, and just experience what the world is like instead of living in a bubble.”

But for Miller, it all comes back to letting parents make the decision, not zoning.

“I wouldn’t want anyone to look at the choices that we have in Gainesville,” she said, “and react from a point of fear.”

At Oxford, she will work towards a Doctor of Philosophy in Criminology.