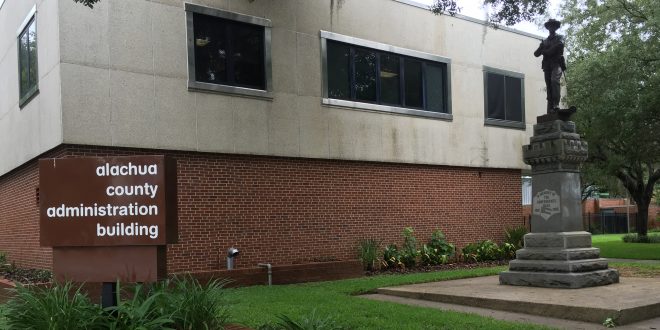 The "Old Joe" Confederate statue in 2015. County leaders are continuing to decide what will be done with the statue following the national outcry against Confederate symbols, and the Matheson History Museum has again emerged as the most likely destination. (File/WUFT News)

By Olivia Granaiola and Abby Murphy

The “Old Joe” statue in downtown Gainesville could still be moved to the Matheson History Museum despite previous discussions that nixed the idea.

County commissioners passed a motion at their meeting Tuesday that said, in part, they’ll join museum board members for a public meeting in 30 to 45 days. There, they’ll discuss what conditions will allow the statute — which commemorates dead Confederate soldiers — to be moved to the museum.

Following the national outcry against Confederate symbols that came out of the 2015 Charleston church shooting, the Matheson emerged as a logical spot for the statue’s relocation.

But the museum and the county couldn’t come to an agreement over cost and how it would be paid for. Though cost wasn’t discussed in exact terms Tuesday, Commissioner Mike Byerly said it’s “a solvable problem.”

The meeting included a debate among 19 Alachua County citizens and seven others, each one of them taking one of three stances: destroying the statue, moving it, or leaving it at the Alachua County Administration Building at the corner of University Avenue and Main Street, where it has been since 1904.

Alachua county resident Khali Blount said that Gainesville shouldn’t celebrate a statue that was created because of a war over slavery.

“That statue is offensive,” he said. “It is an insult to the survivors of that Holocaust, and I will sweat blood to work for the campaign of whoever opposes those who want to keep that statue in place.”

Vietnam veteran David Gold said he would destroy the statue free of charge.

“This statue must be destroyed or moved,” he said. “And I don’t want the city to pay for moving the statue. Incidentally, I would be happy to come with a sledgehammer and destroy the Confederate statue.”

However, slavery didn’t register in the minds of those who support the statue staying put. Another county resident, Seber Newsome, said he believes the memorial is important because of the role Gainesville played in the Civil War.

Others took a more educational approach, saying that the statue should be used as a teaching tool to educate people about lynching.

“The other thing to consider is [the time period during which the statue was built] was essentially the peak of the period of lynching,” Commissioner Robert Hutchison said.

After an almost three-hour discussion and debate, Hutchison laid out a three-part plan to move the statue to the museum.

First comes the public meeting with the Matheson board about conditions to move the statue. Second, the county will provide a historical plaque near the statue to give context.

Finally, a memorial for the 20-plus lynching victims from Gainesville will be installed, too.