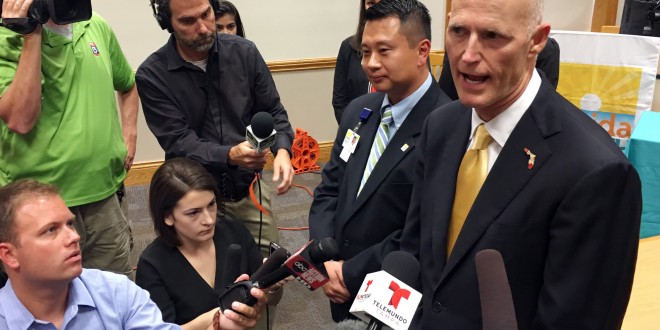 TALLAHASSEE — Florida Gov. Rick Scott, brushing aside a more pessimistic outlook on the state’s financial situation, on Wednesday called on state legislators to slash taxes by $618 million in the coming year.

Scott touted the tax cut package during stops he made at small businesses in three Florida cities. It will be a key part of his spending recommendations that he will release ahead of the annual legislative session that starts in March.

Scott’s argument for the tax cuts is the same one he has made during his six years as governor: that cutting taxes helps generate economic activity. Florida has added more than 1 million jobs during that time period, although the state’s overall employment picture has generally tracked national gains.

“The ultimate result is we get more jobs and we get better paying jobs,” Scott said during a visit to a Jacksonville flooring store.

The biggest chunk of Scott’s tax cut package includes a $454 million proposal to cut by 25 percent the sales taxes charged on commercial rents. This is a tax cut that has gotten strong backing in the past for retailers and other business groups, but it has failed to win support from legislators who say that cuts should be targeted more to residents and consumers.

Scott also is proposing a 10-day back-to-school sales tax holiday, a three-day sales tax holiday for military veterans, a nine-day tax holiday on hurricane supplies, and a one-day “camping and fishing” tax holiday that would remove sales taxes charged on fishing poles and other equipment.

The governor also will ropose a one-year elimination of sales taxes charged on college textbooks.

Scott has routinely recommended tax cuts, but he has had trouble winning approval for his complete tax cut package.

The situation may not be any easier this year as state legislators confront a flat budget outlook that has prompted House and Senate leaders to say they will consider deep cuts to state spending. Senate President Joe Negron already has said he’s willing to trim spending in order to free up money for some of his top priorities, including a substantial boost in money for Florida’s state universities.