By Teal Garth and Jordan Milian

Thousands across the country marched Saturday in solidarity with the national Women’s March on Washington, and Gainesville locals were no different. The Gainesville chapter of National Women’s Liberation, one of the organizers of both the march and today’s #womenstrike movement, organized a protest outside of Hobby Lobby on West Newberry Road.

The organization chose to protest in front of Hobby Lobby because of the poor treatment their workers receive and their stance on not allowing birth control as part of health insurance makes their business a symbol of the corporate, anti-woman agenda of the new administration, according to Candi Churchill, an event organizer.

Teal Garth is a reporter for WUFT News and can be reached at tealgarth@gmail.com or 850-380-1366.
Previous Gainesville Women Protest In Solidarity With Women’s March
Next North Central Florida Avoids Severe Damage During Storm 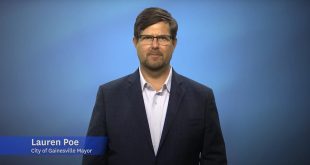