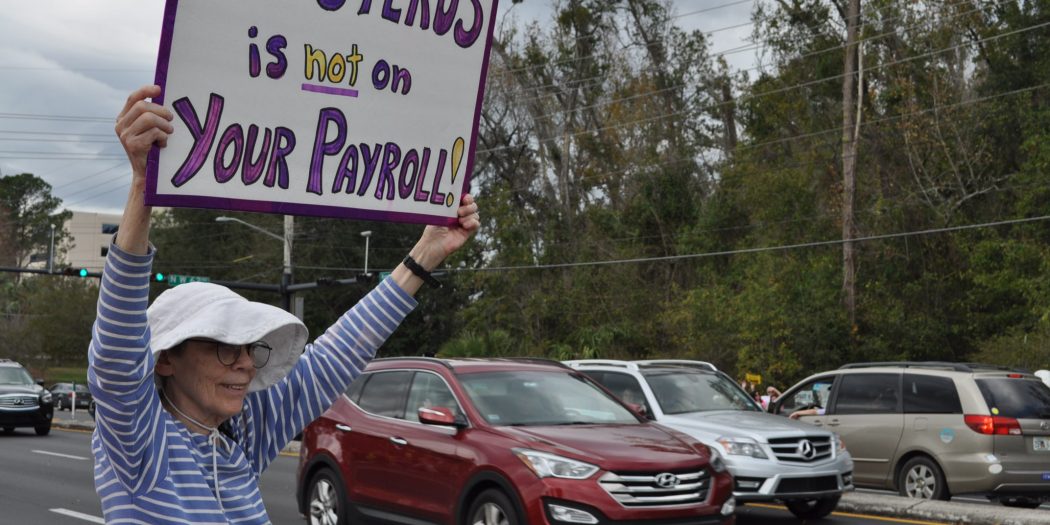 Kathie Sarachild shares a colorful message about her uterus. Sarachild is a member of the National Women’s Liberation. (Teal Garth/WUFT News)

Encouraging car horns and megaphone chants could be heard in this afternoon on Newberry Road in front of Hobby Lobby as hundreds of women, men and children gathered together in protest.

National Women’s Liberation, a nonprofit with chapters in Gainesville and New York, held a picket from 1 to 3 p.m. as part of the #womenstrike movement in solidarity with the Women’s March on Washington, which also took place today.

Candi Churchill, an event organizer, said the Gainesville Women’s Liberation chose to hold the protest in front of Hobby Lobby because the poor treatment their workers receive and their stance on not allowing birth control as part of health insurance makes their business a symbol of the corporate, anti-woman agenda of the new administration.

“We don’t just want to oppose the new administration,” she said.  “We want to build a movement that has the power to make a change for the long term that will make our lives better.”

Jean Fisch, 59, heard about the protest through Facebook and came with a friend. It was the first protest she had ever been to.

“I came because I’m angry and I’m scared,” Fisch said. “Mostly scared, and being here today and expressing how I feel about this makes me feel a little bit more empowered instead of sitting home and feeling like I don’t have a voice. I had to come out today.”

Fisch is from a conservative family in the Deep South and is the only member who is against Trump. She moved to Gainesville after she retired about 20 years ago.

“I think it’s wonderful,” she said. “I love being in Gainesville because there are so many different walks of life and different attitudes, and it’s so refreshing because that’s not how I was brought up.”

The crowd that turned out wasn’t just women. Dana Vold, 29, shared why he came to the protest alone and on a last minute whim and why he wasn’t surprised at the amount of men present.

“I think just about everybody here objects to Trump’s sexism, but frankly I think a lot of people are here because they object to Trump and the Republicans in general,” he said.

“So when you take those two things combined, that’s enough to motivate a lot of men to come.”

Vold said that he is more motivated now than he has been in the past, after seeing that freedoms he cares about might be in danger.

“If it becomes the main narrative of our country that the people don’t want this and that we need to actively fight against it, I think that people are more likely to actually try to do something about it and try to change things in the future,” Vold said.

Teal Garth is a reporter for WUFT News and can be reached at tealgarth@gmail.com or 850-380-1366.
Previous In Photos: Student Walkout, Gainesville’s “People’s Inauguration”
Next In Photos: National Women’s Liberation Marches Near Oaks Mall