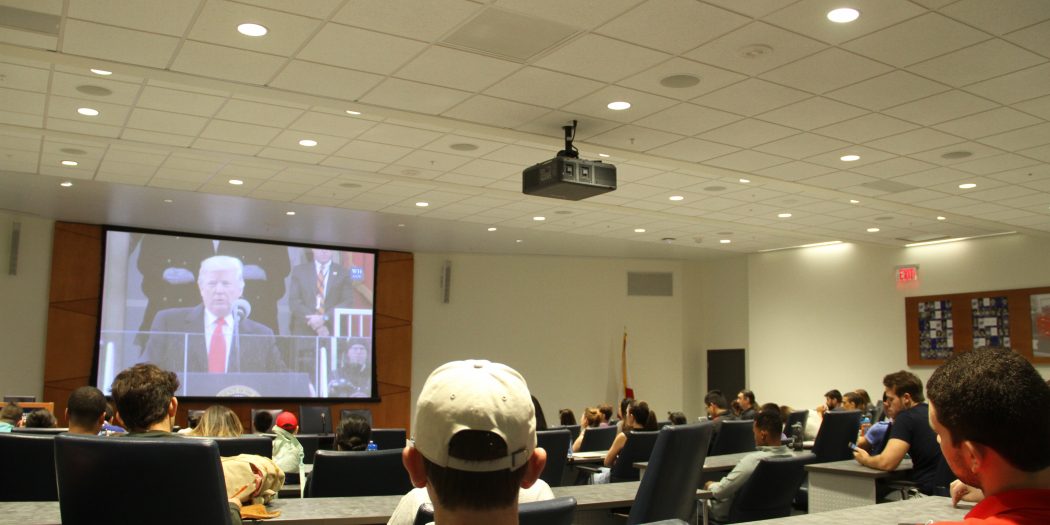 Members of UF's Multicultural and Diversity Affairs group watch Donald Trump's inauguration as the 45th President of the United States Friday. The group vows to hold Trump and other elected officials accountable for their actions and to keep citizens and students engaged in politics. (Brianna Wright/WUFT News)

A UF multicultural affairs group encouraged around 100 people today to hold their leaders, especially newly sworn-in President Donald J. Trump, accountable for his or her actions.

The Multicultural and Diversity Affairs group at the University of Florida held a political action panel that followed a screening of the Trump inauguration in the Chamber Room of the Reitz Union. The event, which began with the viewing at 11:30 a.m., was concluded shortly after 1 p.m.

The event featured a five-person panel, which was comprised of student ambassadors, university professors and department chairs.

The UF Counseling and Wellness Center sent representatives to the event in case attendees wanted to engage with them.

Will Atkins, Interim Executive Director of MCDA, organized the event. He said the event was designed to help students and members of the local community see that political and civic work is ongoing.

“Being civically and politically engaged is an ongoing process,” Atkins said. “There is more work that needs to be done.”

The panelists began answering questions around 12:30 p.m., encouraging attendees to consider how they can engage in their community.

“It is easy to be upset,” said MCDA Ambassador Ebony Love. “We can’t let one day’s disappointment carry into the future.”

Love, who was one of the panelists, said that the importance of viewing the inauguration is to be able to fact check what is said and hold those speaking accountable.

Another panelist, Christian Tirado, said that now more than ever, people need to be engaged.

“The only way to change is to become engaged,” said Tirado, a third-year history and political science major.

The panelists responded to questions about those in opposition to Trump by encouraging their audience to pay attention.

“We need to figure out how to work collectively to make these next four years the best,” said panelist Shenita Denson.

The panelists were asked a variety of pre-written questions as well as questions from the audience.

When asked “What’s next?” the panelists were fairly united. Denson said people need to look at everything with the election from a positive standpoint. Kevin Baron of the Bob Graham Center for Public Service said people need to call their Senators and tell them their issues.

The panelists commented on the unique quality of this election, remarking how different Trump is from President Obama.

“We have to look at the preceding factors,” Love said. “We have two polarizing presidents coming right after another.”

Baron said Trump is an agent of change, and that this election is an outcome of smaller changes that have been happening over the last decade.

The overall theme that the panelists drove home was that the public must hold elected officials accountable.

“MCDA focuses on education through social justice, advocacy, community empowerment and a focus on transformation,” Atkins said. “We do have work to do in Alachua County, in the Gainesville community and in the state of Florida.”

Brianna Wright is a reporter for WUFT. She is a third-year journalism major at the University of Florida with a minor in leadership. She can be reached at 321-750-2369 or bwright6@ufl.edu.
@briannawright0
Previous Alachua County Proposes $25 Million Fairgrounds Relocation Plan, Requests $7 Million From State
Next Citizens Protest Trump’s Inauguration At Gainesville City Hall