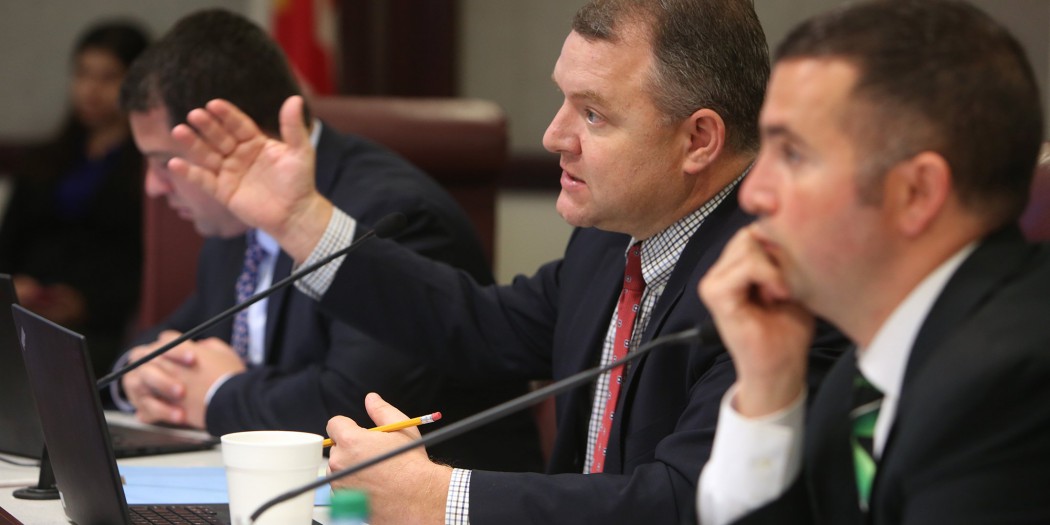 A key senator Thursday released the Legislature’s first attempt at carrying out a constitutional amendment that broadly legalized medical marijuana, with the proposal calling for a growing number of marijuana licenses and making it easier for doctors to order the treatment for patients.

The bill by Sen. Rob Bradley, who was instrumental in passage of medical-marijuana laws in 2014 and 2016, came days after health officials published proposed regulations to implement the constitutional amendment, which received more than 71 percent approval from voters in November.

Under Bradley’s bill, the state could see another 20 marijuana operators — nearly quadruple the seven current licensed “dispensing organizations” — once the number of patients registered for the treatment reaches 500,000.

Christian Bax, director of the Florida Department of Health’s Office of Compassionate Use, told lawmakers last week he expects that many patients to be registered in a state database by the end of the year.

Bradley’s plan (SB 406) would also do away with a current requirement that doctors treat patients for at least 90 days before being allowed to order marijuana for them and would expand from 45 days to 90 days the amount of marijuana supplies patients can purchase. The legislation would also ban edible marijuana products “in a format designed to be attractive to children.”

Ben Pollara, campaign manager of the political committee that backed Amendment 2 in November, called Bradley’s effort “a stark contrast” to the rule proposed Tuesday by the Department of Health.

“It’s a good start toward implementing both the letter and the spirit of the constitutional amendment,” Pollara said in a telephone interview Thursday.

“I appreciate the fact that Sen. Bradley’s bill actually respects that we’re implementing a constitutional amendment here,” he said.

The constitutional amendment allows doctors to order marijuana as a treatment for patients with cancer, epilepsy, glaucoma, HIV, AIDS, post-traumatic stress disorder, amyotrophic lateral sclerosis (ALS), Crohn’s disease, Parkinson’s disease or multiple sclerosis. Doctors also have the power to order marijuana for “other debilitating medical conditions of the same kind or class as or comparable to those enumerated, and for which a physician believes that the medical use of marijuana would likely outweigh the potential health risks for a patient.”

The rule floated by the health department would leave it up to the state Board of Medicine to decide which patients would qualify for treatment under the unspecified conditions, something Pollara objected to strenuously.

“There is a question about how we handle generalized chronic pain. This clarifies that,” Bradley, R-Fleming Island, told The News Service of Florida on Thursday.

Under current law, doctors must complete eight hours of training before they can register patients for marijuana treatment. Bradley’s plan would cut the required training from eight to four hours.

Bradley’s bill would also allow the state’s seven dispensing organizations — currently licensed to grow, process and dispense non-euphoric marijuana for patients with epilepsy or cancer, and full-strength marijuana for terminally ill patients — to operate as “medical marijuana treatment centers” defined in the Constitution.

Under current law, health officials must authorize three new marijuana operator licenses — including one license for a member of the Black Farmers and Agriculturalists Association — once 250,000 patients are registered in the state’s “compassionate use” database.

Bradley’s proposal also would require a member of the black farmers’ association to receive one of the highly sought-after licenses.

“I don’t think it’s a significant enough expansion of licenses, nor a quick enough one to serve what’s going to be a quickly growing patient base,” Pollara said. “It’s not a perfect piece of legislation, but I think it’s a good start considering it’s the first bill released in either chamber.”

The number of licenses has been a thorny issue for the marijuana industry, but operators who currently have licenses aren’t complaining about the expansion included in Bradley’s bill.

“It appears at first blush he’s found a way to implement the will of the voters while balancing the needs of patient access and protecting patient safety,” Steve Vancore, who represents several licensed medical marijuana operators, said.