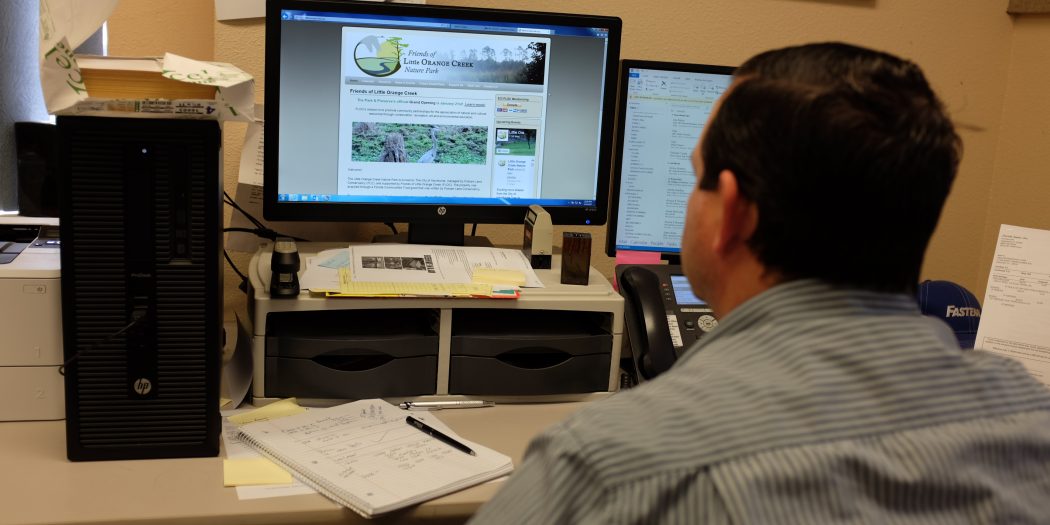 Mayor Matt Surrency at his desk in Hawthorne, Fla. He said that he is working on getting the rest of downtown Hawthorne and the business community now that GRUCom is in schools and library.

Griffin, 45, had been working for Amazon over the internet as both a resolution specialist and as an English speaking supervisor. She loved the pay, the way the company treated her and the fact that she could work for company like Amazon from Hawthorne, Florida.

Then one day in September, Amazon had to fire her. The company requires employees to be connected to a hardline internet connection.

She is one of many living in Hawthorne who, despite steps taken by the city, continue to struggle with limited access to the internet one year after WUFT reported the city’s connectivity issues.

“I’m involved throughout the state and the country on issues like this,” Hawthorne Mayor Matt Surrency said, “and it’s certainly under their recommended benchmarks.”

He said while steps have been made to bring better internet to the city, progress in the general community is at a standstill.

Surrency points to aging voice lines from AT&T that the city relies on for its internet access.

Up until last year, AT&T was the primary internet service provider in Hawthorne that offered a hardline internet connection as opposed to satellite or other wireless services from carriers like Verizon. Surrency said the number of customers plays a big factor to AT&T when it comes to whether they upgrade a city’s access. Little competition in Hawthorne didn’t help either.

One of the first steps that Surrency and the city took to improve conditions in 2016 was getting GRUCom, Gainesville Regional Utility’s internet service, to come in and provide faster speeds and spur more competition in the city.

The better internet connectivity that the city has been working on with GRUCom is only available to schools and the library for now.

Keith Harmon, manager of Hawthorne Branch Library, said after the library had the new lines installed in August, they saw speeds increase dramatically.

“Certainly, it has made us more of a central, valuable resource to the community,” Harmon said.

Surrency also hopes the state will assist in driving more competition by forcing companies to work with them when it comes to taking advantage of dark fiber, which is unused fiber optic cable already underground.

Surrency said he will continue to work on the city’s internet connection and that he is working on getting the rest of the district downtown and the business community connected.

Surrency said in the near-term, the city is working on setting up a meeting with GRUCom to see where they can go from here. He hopes that now that AT&T faces some competition, it will be more willing to work with the city.

One other goal Surrency has in 2017 is to see if the city government can one day bring internet connection to the unincorporated areas of Hawthorne – like where Griffin lives.

Griffin said she hopes that her home will be hooked up with a hardline connection soon so she can go back to working with Amazon.

“I was proud to work at Amazon,” she said. “It put a smile on my face every time I went out.”

Ryan Serpico is a reporter for WUFT. He's a University of Florida journalism student looking to see how technology is affecting our lives and society as a whole through reporting.
@zuckerco
Previous Donald Trump Sworn In As The 45th President Of The United States
Next In Photos: Inauguration Day

In August, the City Commission adopted an ordinance requiring businesses to install retention systems to keep their shopping carts from being discarded in the community.