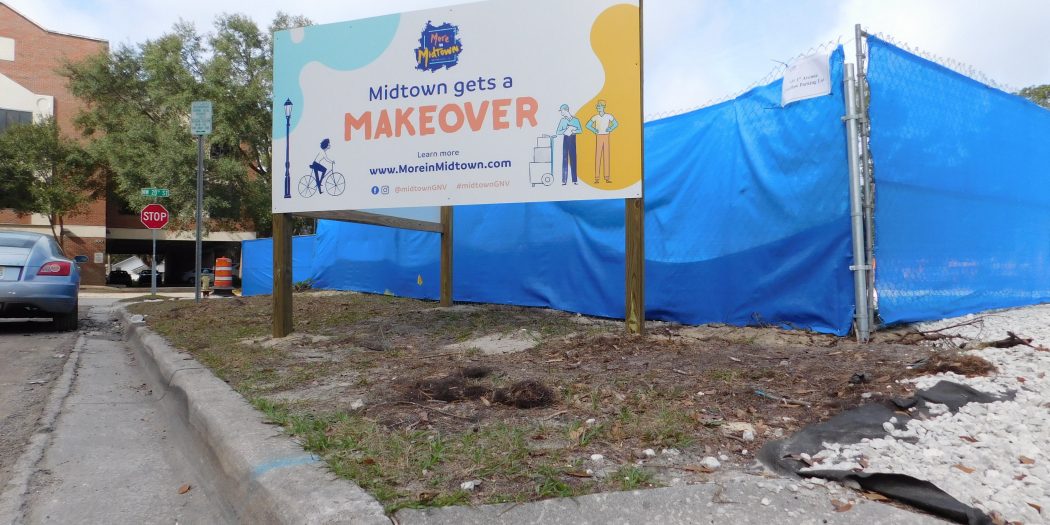 Construction is underway on the intersection of 21st Street and First Avenue. This street is called Gainesville Alley by many and this project is just going to make it that much more important, Father David Ruchinski said.

January 20, 2017 Business and development, Getting around

The Gainesville Community Redevelopment Agency broke ground on the More in Midtown project last week along Northwest First Avenue and is set to complete the streetscape project in September, according to a CRA press release. The project is scheduled to take eight months to complete.

Sarit Sela, the project manager for More in Midtown, is working with her design team and other departments in Gainesville such as Public Works, Gainesville Regional Utilities and others to make the project a success.

“It’s a lot like being a conductor in the orchestra,” she said.

After conducting surveys and holding open meetings and other public forums of discussion, the CRA prioritized a list of needs that need to be met to make Midtown a better and safer place for the public, she said.

Though the construction has already interfered with parking and street traffic, the community is still excited to see the changes that will improve it.

“With any move forward there will be some temporary headaches, but it will pay off in the end by making First Avenue a better place for everyone, including students,” said Father David Ruchinski, a priest at St. Augustine Church and Catholic Student Center.

In the meantime, complimentary parking consisting of about 25 spaces is in place at 1934 NW First Ave. during construction, with parking decals provided to local stakeholders, Sela said.

After construction finishes in September, paid parking will be available through a decal, parking meter or a new mobile parking app, according to the CRA press release.

The construction crew involved in the project will strive to minimize street closures and keep traffic flowing by keeping one lane open during construction, Sela added.

This was the case on the 1600 block on Tuesday, but traffic was still able to move from west to east.

Despite all of the precautions that the CRA is taking, pedestrians are likely to meet delays while the already busy streets of Midtown are being reconstructed.

Matthew Booe, a 20-year-old computer engineering major at UF, admits that Midtown could use some updating but not at the expense of increasing the risks the locals take traveling through Midtown.

“I’ve been almost hit by cars more times than I can count while riding my bike in Midtown and all of the construction has made the bad drivers worse,” he said. “I’m not sure it’s worth it.”

Curtis DuChanois, a 22-year-old marketing senior at UF, has had trouble driving through Midtown with all of the stops and detours on First Avenue.

“It will all be worth it if we can get more parking,” he said.

Another benefit of the CRA redevelopment in Midtown is the creation of other subsidized programs that local businesses are benefiting from, such as Midtown Architectural Assistance, Façade Grant and residential power wash and paint programs, Sela said.

Study Edge, Pascal’s Coffeehouse and Gator Spirits & Fine Wines are just a few of the businesses benefiting from this program, with more to follow, she said.

The website for More in Midtown, which has more information about the project’s development, is set to launch in the near future, Sela said.

“What is unique about this project is the effort to really rebrand Midtown and making guests more comfortable in the area,” Sela said. “We hope to really help, sustain and grow businesses in the area.”

Cassandra Rosevelt is a reporter for WuftNews and can be reached at 856-25-7056 or caseyerin1994@ufl.edu.
@@CassandraErin94
Previous In D.C., Group Of Protesters Breaks Windows; Police Use Pepper Spray
Next Alachua County Proposes $25 Million Fairgrounds Relocation Plan, Requests $7 Million From State

Flights From GNV To Miami Have Resumed

Non-stop flights from Gainesville Regional Airport to Miami are resuming after a six-month, COVID-19 related hiatus.