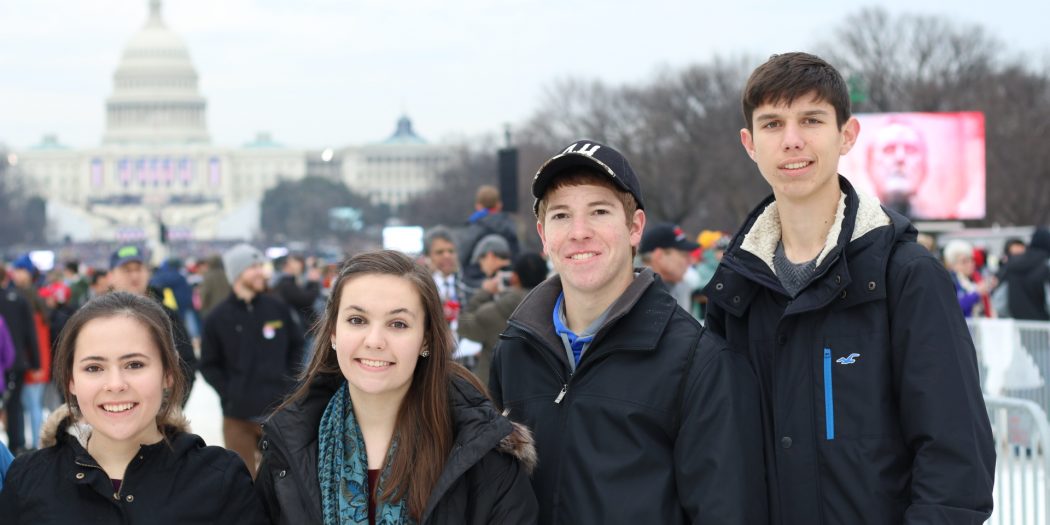 Michelle Tinker and her sister Danielle Tinker pose for a photo with two other 4-H members at the presidential inauguration . (Photo courtesy of Shaumond Scott)

Fifty youth from Florida attended the presidential inauguration in Washington, D.C. today, to learn about U.S. government and civic engagement, as part of a youth-development program from the University of Florida.

4-H, a group of more than 100 public universities throughout the nation that gives young people the opportunity to learn through hands-on experiences, participated in a nationwide program, called Citizen Washington Focus, sending youth to the inauguration.

Being one of the universities supporting 4-H, UF had the opportunity to send members, ages 14 to 19, from 15 counties in Florida to Washington, D.C. Chris DeCubellis, associated state program leader for 4-H youth development with UF, said the youth were in the capital from Jan. 17 to Jan. 20, and while there, got to tour museums, monuments, and attend educational workshops.

DeCubellis said the trip had been in planning for almost two years, and that civil engagements are very important for young people to become productive members of society.

“These young people will probably have a once-in-a-lifetime experience to really explore the history of the presidency of our nation, understand the election process, understand the role of the press, learn more about citizenship through civic education, and of course the tons of guest speakers that they’ll experience this week,” DeCubellis said. “It’s really just an opportunity to be immersed in our political process at the highest level.”

Danielle Tinker, a 19-year–old 4-H member from Escambia County, is one of these “young people” who went on the trip and got to experience Washington, D.C. and the inauguration.

“It was amazing to be there,” Tinker said. “It was amazing just to stand there on the mall [National Mall] and witness one president transferring power to a next president.”

Tinker also said they got to learn about how presidential campaigns are run, and what the executive branch does in general.

“It was in-depth,” Tinker said.

Angela Tinker, Tinker’s mother, said Tinker started at 4-H when she was just 10 years old, and that the program has had a tremendous impact on Tinker’s life.

“She’s become a confident leader,” Angela said. “She has developed all kinds of skills.”

So it was no surprise when Angela and her husband were very supportive of Tinker attending the inauguration.

“It’s really a once-in-a-lifetime opportunity,” Angela said. “The things they’ve been able to see and experience around Washington, D.C., leading up to the inauguration I think that they’ll take with them for a lifetime.”

Tinker said the experience was something monumental, and that she can say she was there to her children and grandchildren.

Angela mentioned she wished she could have gone as well.

“I wanted to hide in her suitcase,” she said.

Syama Allard is a reporter for WUFT news. He can be reached at 352-256-8749 and at sallard108@ufl.edu
@Syama Allard
Previous Jan. 20, 2017: Afternoon News In 90
Next Autopsy Suggests Orlando Officer On Back When Fatally Shot