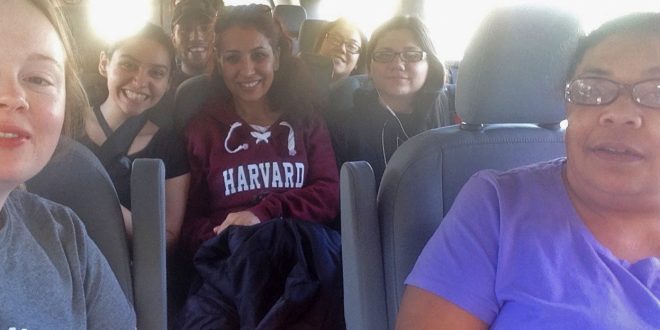 University of Florida staff members and students pose in a van on their way to Washington D.C. to document reactions and stories at Friday's inauguration of President-elect Donald Trump and Saturday's Women's March on Washington. (Photo courtesy Aliya Miranda)

About 5 a.m. Wednesday morning, a group of 17 University of Florida staff members and students began a trek to Washington D.C. in two vans.

Their mission is to document two events of historical significance this weekend in the nation’s capital: the inauguration of President-elect Donald Trump and the Women’s March on Washington the following day.

As part of a collaborative project by the UF Center for Gender, Sexualities, and Women’s Studies Research and the Samuel Proctor Oral History Program, the students and staff will arrive in D.C. ready to talk to event attendees and collect narratives, said Holland Hall, the group’s leader and an Oral History Program staff member.

“We’ll just be out in the field interviewing people about this huge moment in history,” she said. “We’re hoping to get a variety of responses and have a very objective, holistic view of what’s going on in Washington D.C.”

They plan to use their interviews to create multimedia presentations that will be published on the Oral History Program’s website and YouTube channel.

“At the moment, we don’t have many concrete ideas,” Hall said. “We’ll be doing some women’s march-specific podcasts, video, and some portraits of some people out and about, collecting sound bites to go with the pictures.”

The group doesn’t have a set timeline for completion of the multimedia projects but hopes to make this an ongoing project upon returning from D.C., Hall said.

The center approached the Oral History Program two months ago with students who were interested in attending the inauguration and women’s march, Hall said. The group is going as a neutral party, she added.

“We don’t have any affiliation with people who are actually going to the march,” Hall said. “As a researcher, we’re going in objectively. Of course, all of us have our own opinions and views of what they’re soliciting.

“But just going out into the field and collecting people’s narratives and people’s opinions — especially if they’re different from our own — we want to bring that to the community that we have an outreach to and just use it to educate people.”

The trip is being funded by donations from a variety of contributors across the university.

“We had a really gracious donor who donated a couple of hotel rooms initially to the women’s studies department, so the oral history program tacked on another three rooms,” Hall said.

The group is composed of 14 women and three men. One of the men, UF political science student Oliver Telusma, said that while he is there mainly to represent the Latino community, he is excited to simply be present for the women’s march.

“It’s just important to validate women in the U.S.,” said Telusma, research coordinator for the Oral History Program’s Latina/o Diaspora in the Americas Project. “It’s not my place to speak up for them, but I want to support them.”

Venetia Ponds, a UF doctoral student in anthropology studying race and media in the U.S., said she is interested in social protests and how they can change society.

“I’m gonna be looking for the people who are protesting the protest,” she said. “And there better be some because I don’t want to feel like women are so dismissed that people don’t come and be angry.”

Ponds said the march, which she called the first ever put together by middle-class white women, will be a monumental event only a day after the inauguration of “a very divisive president-elect.”

“I’m gonna be really looking at how they run this protest,” she said. “That’s what I want to be able to translate to my students when I teach about the place of social protests in the workings of the U.S. — people coming together, people marching together, and what meaning that has here in America.”

Molly Donovan is a reporter for WUFT News and can be reached at 850-819-0721 or news@wuft.org.
Previous Jan. 18, 2017: Afternoon News In 90
Next Proposed Bright Futures Extension Could Mean More Summer Students