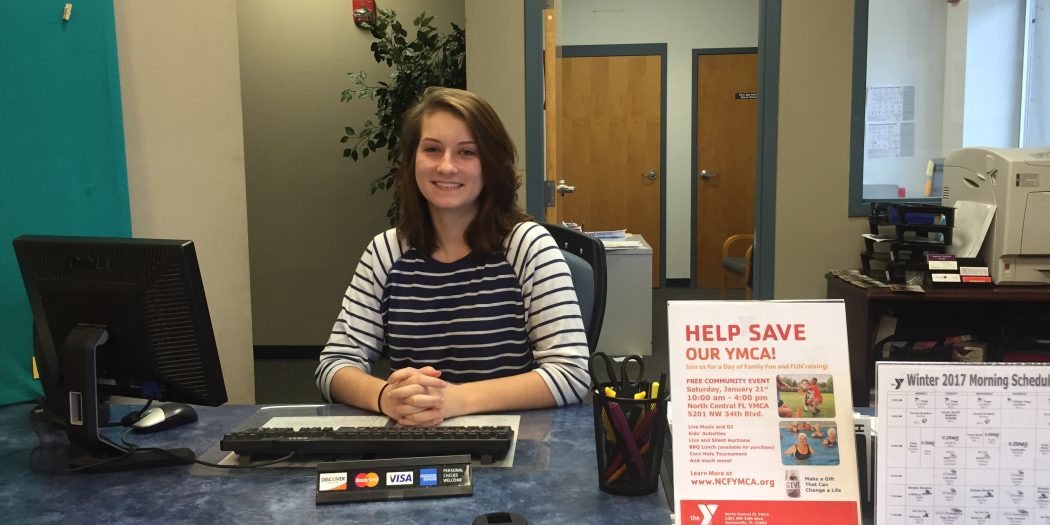 Sarah Crooks, an assistant membership supervisor, greets YMCA members when they enter. She said the recent bankruptcy has re-inspired her. (Monica Humphries/WUFT News)

The YMCA is where Leslie Galloway took her first dive off a diving board. It’s where her sister learned to swim and where her family built a community.

Galloway, a lifetime member, is doing everything she can to keep it afloat.

This December, the YMCA of North Central Florida, located on 5201 NW 34 Blvd., filed for bankruptcy.

It was expected to close Dec. 31 but received an extension until the end of January. In order to keep the YMCA open, it must raise $1.5 million.

“This is just finally coming into the public eye, but it’s the battle that I’ve been fighting every day for the last four and a half years,” said John Bonacci, the CEO of the North Central Florida YMCA.

As of Wednesday, the YMCA has received $829,000 from almost 300 members, $600,000 of which was made by an anonymous donor and requires a matching donation, said Bonacci.

In an effort to raise the remaining amount, the YMCA is hosting a fundraiser Saturday. The event will have a silent and live auction, Zumba classes, massages, a cornhole tournament and lunch, with all money going straight towards the facility, which will be open for everyone to use.

Everything from scuba tanks to wheelchairs will be auctioned off. One YMCA member donated lemons from her backyard and another knitted an orange-and-blue table runner.

“I’ve seen so many people from the community want to help in any way they can,” Galloway said.

Galloway said she hopes to raise $100,000, but Bonacci said the event is more about showing the community what the YMCA has to offer.

“Most people tend to think of the YMCA in one particular program silo,” he said. “But most people don’t know everything that we offer within the 50,000 square feet facility.”

If the $1.5 million is raised, the Y will be debt free, own the property outright and no longer have a mortgage or rent payment, Bonacci said. That would also account for $300,000 in facility repairs and renovations.

The city is considering purchasing the facility if it doesn’t reach the needed funds.

In Wednesday’s Public Recreation and Parks Board meeting, the board discussed the topic.

The board said there are still many questions, for example, would the city operate the facility or contract it to the YMCA?

Overall, the board thought purchasing the Y was a good idea.

William Burger, a member of the board, wrote a letter to the city urging them to pursue it.

No matter who owns it, Jean Quillen hopes the YMCA stays open.

Every Thursday, Quillen wakes up early for her 8:30 a.m. yoga class.

As she walks through the facility, she’s welcomed at the front desk. Quillen says hi to the custodian and a woman on the elliptical. She lays down her mat and everyone shares the latest news.

“It’s a community,” she said. “I had every intention of going to Gainesville Health and Fitness, but I never got that far because the people were so nice here.”

Sarah Crooks reiterated the idea of a community.

After working at the Y for three years, she said watching her community come together was inspiring.

“You see them day in and day out, and it’s not until they’re like, ‘Look! I’ve lost this much weight’ or ‘I never used to be able to lift my leg beyond here’ and you see the impact this place has,” she said.

Whether or not the Y remains open, Crooks, Galloway, Bonacci and Quillen all said they have hope.

“We’re committed to seeing this through one way or another,” Bonacci said.