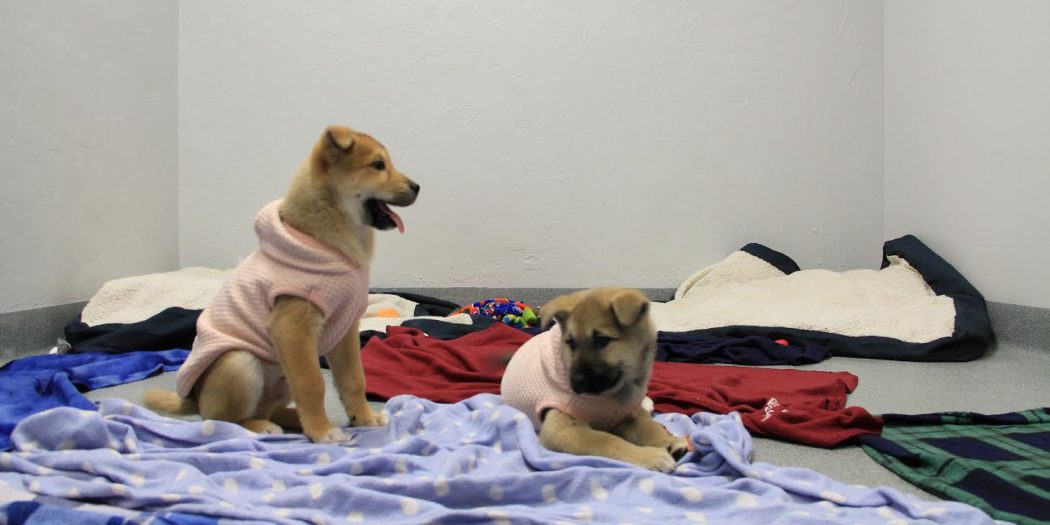 Bernard and Louie are two puppies rescued from a South Korean dog meat farm, who will be up for adoption at the Alachua County Humane Society (Molly Vossler/WUFT News)

Bernard and Louie have 31 potential families looking to bring them home.

According to Margot DeConna, director of development at the Alachua County Humane Society, staff and adoption counsellors will spend the next two days looking through each individual application to determine the best fit for the puppies.

The two puppies will be adopted within the week, less than 10 days after their arrival. According to DeConna, the average ‘length of stay’ for all animals is 31 days, with puppies staying the shortest amount of time at about 8 days and kittens at about 44 days.

After a 14-hour flight from Asia and a six-hour drive from Atlanta, two puppies rescued from impending slaughter arrived at the Alachua County Humane Society Monday night.

The littermates are 3- to-4-month-old Korean Jindo mixes, and will be ready for adoption within the next two weeks, said Margot DeConna, the director of development at ACHS.

This is the HSI’s sixth dog meat farm closure, and the remaining rescues will be distributed to shelters in Florida as well as other parts of the U.S., the United Kingdom and Canada, according to a statement on HSI’s website.

This is the first time ACHS has taken in any international rescues, DeConna said. Originally the local shelter was expecting four puppies, she said, but since the quarantine and transportation process from Korea can be long and tedious, only Bernard and Louie showed up.

“We may see a few more dogs from that operation, we may not, but I know there are at least 14 that are going to Tampa,” DeConna said.

The puppies appear to be good friends, and have spent quite a bit of time together on their long journey, DeConna said.

“We won’t require that they stay together in a home – they can be adopted separately,” DeConna said. “But if an adopter was interested in both of them, we would consider it.”

Bernard and Louie need to be neutered as well as have microchips implanted before they can be adopted, said Chrissy Sedgley, the director of operations at ACHS.

“We’ll definitely be letting people know when they’re going to be available,” she said. “Once they are available for adoption it will be on first come first serve, just because there are going to be quite a few people who wan[t] to meet them.”

The ACHS is a no-kill shelter that takes in roughly 50 dogs per month, mostly from the Alachua County area, Sedgley said. The shelter’s goal is to help reduce euthanasia normally conducted by Alachua County Animal Services.

Sedgley said the shelter has adoption counselors who will help those interested in adopting by getting to know their lifestyle and traits in order to find the best match.

“We really wanna focus on making the best fit for the animal and for the family, so our adoption counselors will get to know potential adopters and try to make a match based on the animals we have here,”  Sedgley said.