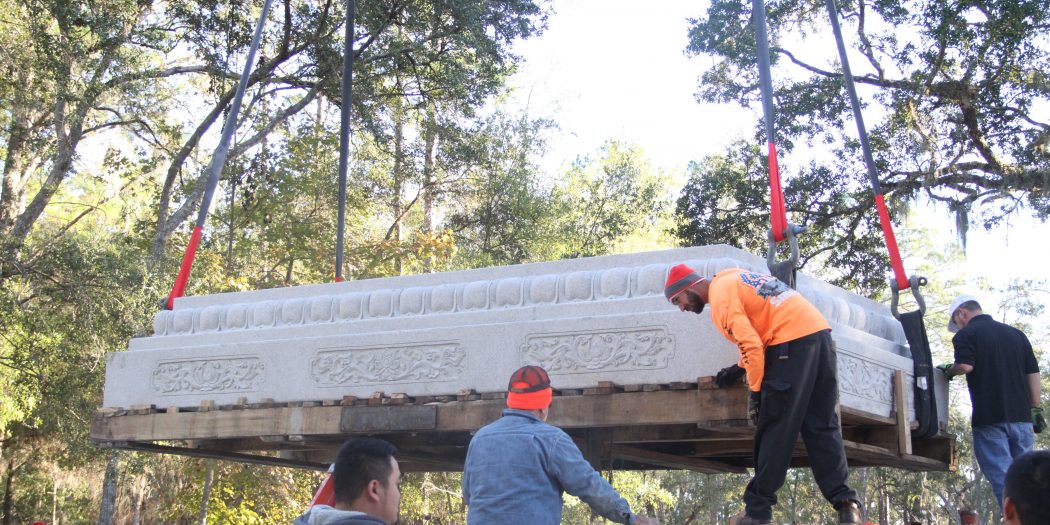 Thich Duc Thong, a chief monk at the pagoda, said the purpose of the statues, which represent three different elements of Buddhist practice, is to attract people of any faith to practice meditation at A Nan Temple.

Thong, also referred to as Venerable Thay by the congregants at the pagoda, said he believes that by the time the three statues are installed, their significance will inspire people in Gainesville to meditate.

“We want to create like a park for the city of Gainesville,” said Thong. “They will see the big statue and they will explore, and hopefully they will want to learn about Buddhism.”

Although A Nan Temple, located at 2120 SE 15th St., regularly practices Buddhism, Thong said he welcomes people of any and all faiths and origins to visit the pagoda.

Clement Anson, a practicing Buddhist from Malaysia, sees the three new statues as a chance for everyone to enjoy a part of his religion.

“It gives us more exposure,” Anson said. “The statues will be a constant reminder of what we strive to be as Buddhists.”

Anson and Thong said the first statue is of a 28-foot-tall sitting Buddha, a symbol of enlightenment and the escape of suffering. The 45-foot-tall statue that will be located in the center of the park will be Avalokitesvara, the Sanskrit name for a goddess that signifies compassion. There will also be a 33-foot-long statue of a sleeping Buddha that signifies his passing away.

President of World Class Travel Bob Todd helped to organize the delivery of the three statues. According to Todd, the statues were assisted by ship and eight trucks overseas — a project that cost about $500,000.

“A lot of hard-working industrious people have put their pocketbooks together,” Todd said. “It cost as much to ship them here as it did to have them carved.”

Thong attended a ceremony in Vietnam in order to bless the granite stone from which the statues were carved.

Thong said he wishes people will come to the statues to practice Buddhism and mediation.

After three years of plans and preparation, he hopes to have a grand opening for the three statues on May 7.