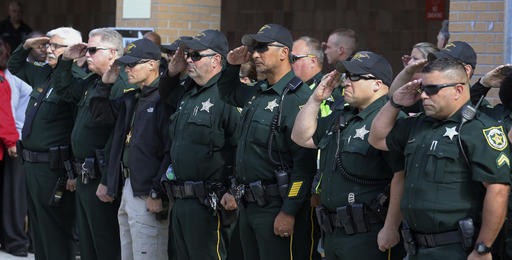 Orlando Police Chief John Mina says his agency is doing everything it can to catch a suspect wanted in the fatal shooting of a police sergeant Monday.

Mina said Tuesday that teams of detectives are following all leads and hundreds of officers and deputies are searching for the suspect, 41-year-old Markeith Loyd.

Mina spoke in a video posted on the agency’s Twitter page.

Master Sgt. Debra Clayton was gunned down in a northwest Orlando Wal-Mart parking lot after she approached Loyd, who was wanted for questioning in the murder of his pregnant girlfriend.

Officers focused the manhunt on an apartment complex Monday afternoon, but no searches appeared to be going on there Tuesday morning.

More than two hours after Clayton was fatally shot, Orange County Sheriff’s Office Deputy First Class Norman Lewis was killed when his motorcycle collided with a van as he was responding to the manhunt in search of Loyd.

The community continued to mourn the two officers amid the search for the suspect Tuesday. Shoppers laid flowers, teddy bears and candles outside the Wal-Mart store where Clayton was killed and her patrol car is on display in front of Orlando Police headquarters.

The Associated Press is a wire service to which WUFT News subscribes.
Previous Woman Poses As Fellow Inmate To Get Out Of Clay County Jail
Next Both Names Of Same-Sex Parents To Be On Florida Birth Certificates