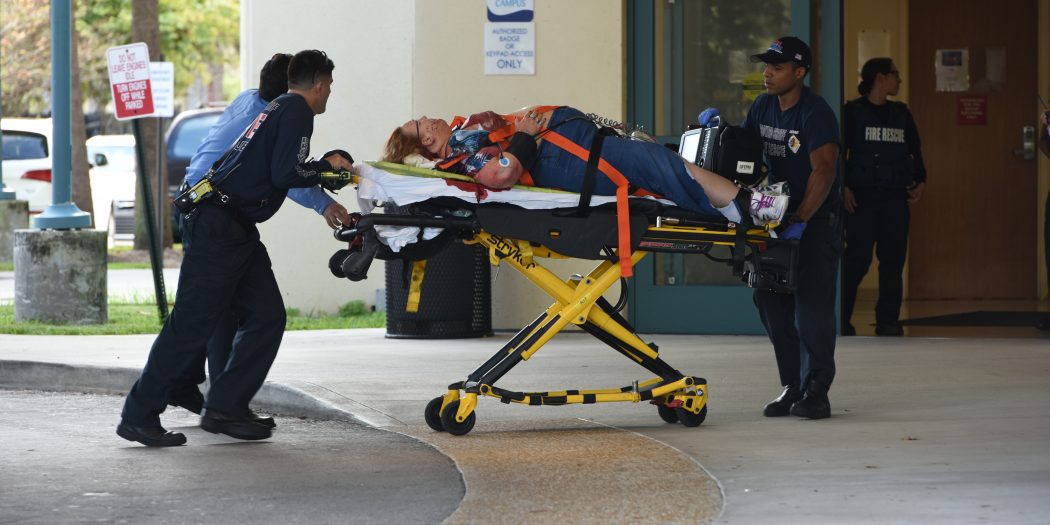 By CNN and Associated Press

A gunman opened fire in the baggage claim area at the Fort Lauderdale airport Friday, killing five people and wounding eight before being taken into custody in an attack that sent panicked passengers running out of the terminal and onto the tarmac, authorities said.

Authorities gave no details on a possible motive for the shooting.

“People started kind of screaming and trying to get out of any door they could or hide under the chairs,” a witness, Mark Lea, told MSNBC. “He just kind of continued coming in, just randomly shooting at people, no rhyme or reason to it.”

Then the attacker threw down his weapon and lay spread-eagle on the ground until he was taken into custody, Lea said.

“We have no evidence at this time that he was acting with anyone else. He is currently in custody and we’re investigating,” Sharief said. Investigators are looking into the suspect’s motive, she said.

A county official says the Fort Lauderdale airport shooter pulled a gun out of a checked bag, loaded it in a bathroom and started shooting.

Chip LaMarca, a Broward County commissioner, was briefed on the airport shooting by Broward Sheriff’s office. He told The Associated Press by phone that the shooter was a passenger on a Canadian flight and had checked a gun.

Sheriff Scott Israel says the gunman was not harmed and that law enforcement did not fire any shots. He says it is not yet known if the shooting was an act of terror.

Sen. Bill Nelson of Florida identified the gunman as Esteban Santiago and said that he was carrying a military ID, but that it was unclear whether it was his.

“We don’t know a motive at this point,” Nelson said. “This could well be someone who is mentally deranged, or in fact it could be someone who had a much more sinister motive that we have to worry about every day, and that is terrorism. We can’t conclude that.”

Israel also says there was nothing to substantiate reports of a second shooting at the airport.

A passenger says he heard the first gunshots as he picked up his luggage from a baggage claim carousel in a shooting.

John Schilcher told Fox News the person next to him fell to the ground Friday. He says other people started falling, and he then dropped to the ground with his wife and mother-in-law. Schilcher says “the firing just went on and on.”

He says the shooter emptied his weapon and reloaded during an eerily quiet lull in the gunfire. Schilcher says he didn’t assume it was safe until he saw a police officer standing over him at the Fort Lauderdale international airport.

He says he remained on the ground and was told not to move as authorities investigated unconfirmed reports of a second shooting.

All flights have been canceled according to airport officials via Twitter.

All services are temporarily suspended at #FLL. Please contact your air carrier about your flight information. https://t.co/Uwbaa6n6aB

At least nine people were injured in a shooting at the Fort Lauderdale airport on Friday, a US official familiar with the incident said. The shooter is in custody, according to the official.

At least 9 hurt in shooting at Ft. Lauderdale airport, US official tells CNN. A shooter is in custody. https://t.co/3Rvl8b33Jc pic.twitter.com/vbVqrOFdVa

Parts of Fort Lauderdale airport were apparently evacuated on Friday after a security incident. Airport officials said on Twitter that there is an “ongoing incident” in the baggage claim area of Terminal 2.

There is an ongoing incident in Terminal 2, Baggage Claim. Media availability is at the staging area.

I’m at the Ft. Lauderdale Airport. Shots have been fired. Everyone is running.

Gene Messina had just arrived in Fort Lauderdale on Delta Flight 2012 as people were being evacuated from the terminal.

“I got off the plane and I saw people running and screaming. At first I was in shock but when I saw TSA agents running, I booked,” Messina told CNN over Instagram.

In November 2016, nearly 2.5 million travelers passed through Fort Lauderdale’s airport, according to a government report on the facility. There are four terminals at the airport.

Aerial footage from CNN affiliates showed large groups of people standing outside on the tarmac.

CNN’s Amanda Wills and David Williams contributed to this report.

CNN is a wire service to which WUFT News subscribes.
Previous Florida’s Top Lawyer Mum On Working For Trump Administration
Next SeaWorld: Tilikum, Orca That Killed Trainer, Has Died