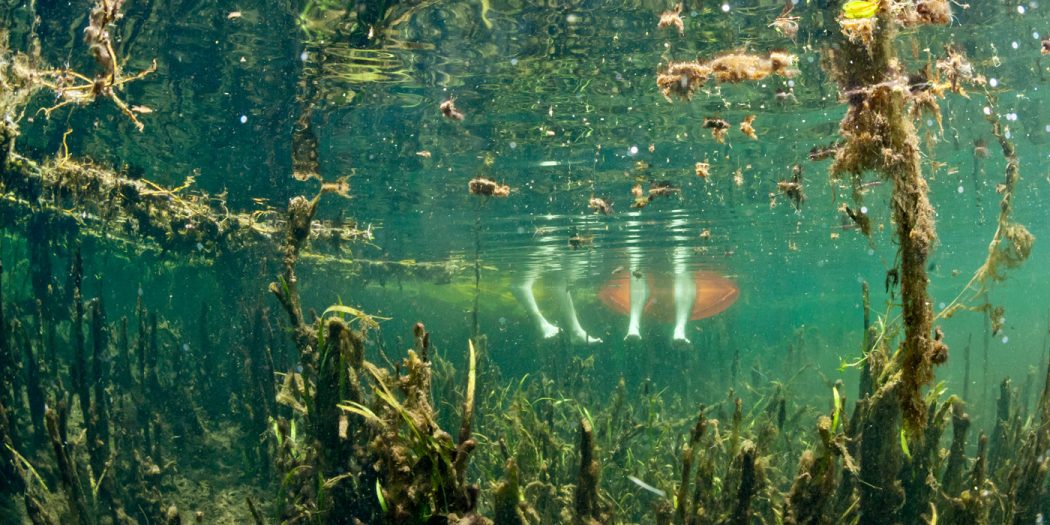 Moran spent most of his career shooting gorgeous photos of springs such as the Ichetucknee. But now he also documents the springs' degredation in an effort to inspire public and political action to save them. Here, tubers on the Ich are joined by some unpleasant algae. (Courtesy John Moran)

John Moran is a nature photographer whose work is a deep meditation on water and Florida’s future. Traveling the Sunshine State with his cameras, Moran seeks a vision of natural Florida as it appeared to Ponce de Leon and other early strangers in paradise. His photos have appeared in National Geographic, Life, Time, Smithsonian, the New York Times Magazine and on the cover of the National Audubon Society Field Guide to Florida. His 30-year project to photograph Florida’s springs is chronicled in the Springs Eternal exhibit, now touring the state.

His past books include Journal of Light: The Visual Diary of a Florida Nature Photographer and Finding Yourself: A Spiritual Journey Through a Florida Garden, with writer Bill Maxwell. In the words of Florida historian Gary Mormino, “If Florida had a Photographer Laureate, John Moran should hold that title.”

Moran was interviewed by Kamala Earl, a Ph.D. student studying interdisciplinary ecology at the University of Florida.

John Moran first picked up a camera while still in middle school, and a high school photography class further cultivated his interest. His earliest photographic inspiration followed his interest in astronomy and meteorology: he enjoyed capturing images of clouds and the night sky. In 1974, as a freshman architecture student at the University of Florida, he bought his first serious camera and was “completely enthralled and madly in love.” He knew then he was on the path to becoming a visual storyteller and photojournalist, and promptly switched majors, graduating in 1978 from the College of Journalism and Communications.

Following a summer 1978 photo internship with National Geographic, he returned to Gainesville with the goal of remaining and finding a job in photojournalism. The following year, he began his career with The Gainesville Sun, where he worked for what he describes as 23 happy years, during the heyday of newspaper journalism. He photographed his weekend nature outings and focused not only on sharing beautiful pictures, but also on environmental storytelling. He contributed to columns including “Eye on Nature” and “Nature.” The photos and essays from Eye on Nature later served as the foundation to his popular book, Journal of Light. Moran left the Sun in 2003 to become an independent nature photographer.

Moran is “all about Florida, all the time.” He fell in love with the world outside his backdoor as a child, finding comfort and joy building tree houses and boats in orange groves and cypress swamps in southwest Florida. He believes that there is value in staying put in a place long enough to come to know and love and truly appreciate that place.

In recent years, Moran’s career has changed focus. He was comfortable for many years as a “bliss and beauty nature photographer,” he says, but personal soul searching led him re-examine his work and see that his pretty pictures weren’t helping Florida’s declining waters. He felt an obligation to show and tell the truth more fully. With Lesley Gamble, he co-created the Springs Eternal Project, an effort to win hearts and minds to protect Florida’s water, through images, information and outreach. One of the most powerful aspects of the project is a then-versus-now photographic exhibition by Moran that was featured at the Florida Museum of Natural History in Gainesville and Jacksonville’s Museum of Science and History. The exhibit features gut-wrenching side by side images taken at identical springs locations, separated by ten to twenty years of time, that clearly show the grave degradation plaguing the once-pristine springs.

Moran shared his advice for aspiring nature and conservation photographers. He said there are any hundred number of ways to pay the bills in this field, and that each person must craft a unique algorithm for themselves. But in this tough industry, it isn’t always enough to be talented and passionate; it’s also important to find a niche that meets the needs of the marketplace. He recommends feeding your passion, jumping into the deep end, networking, and honing communication skills beyond photography, especially writing skills.

Moran is currently working on a springs book for University Press of Florida, and plans to continue documenting and communicating both the beauty of and ecological threats to Florida’s water.