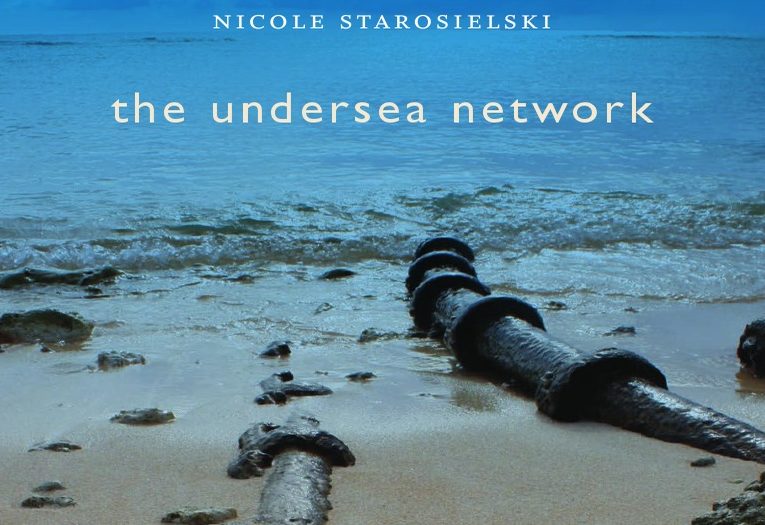 Nicole Starosielski is assistant professor of Media, Culture, and Communication at New York University and author of The Undersea Network

Nicole Starosielski is assistant professor of Media, Culture, and Communication at New York University and author of The Undersea Network, which follows the undersea cables that allow for global communication from the ocean depths to the landings on South Pacific islands. Her research focuses on the global distribution of digital media, and the relationship among technology, society and the aquatic environment. Starosielski’s published essays include how Fiji’s video stores serve as a nexus of digital media access (Media Fields Journal), on Guam’s critical role in transpacific digital exchange (Amerasia) and photo essays on undersea cables (Octopus and Media-N).

Nicole Starosielski was interviewed by Madison Jones, a Graduate Research Fellow in the UF English Department whose research focuses on the relationship between writing and the environment. He has an article on Plato and environmental rhetoric in the recent ISLE: Interdisciplinary Studies in Literature and the Environment.

MJ: Your research peels back cultural, historical, geographic, material and environmental layers in a compelling repositioning of that line between the virtual and material worlds. We often imagine our communication networks as clouds, but we really mean the material environments through which our signals pass. In many ways, the labor of this book is summed up in the word “surfacing,” also the title of your digital mapping project. Can you talk about how these undersea cables are almost invisible in popular culture?

NS: That was one of the things that compelled me to start working on this project. I didn’t realize, even as a graduate student in Film and Media Studies in the early 2000’s, that they existed. In the mid-2000’s, I first realized that undersea cables carried most of the internet traffic across the ocean. Most of my peers in the field weren’t talking about this. Despite the fact that there had been plenty of books and news articles documenting the undersea cables featuring the iconic telegeography maps of all the cables spread out across the ocean, it continued to be fairly invisible in popular culture. So much so that I didn’t know about them until my advisor suggested that I look at them. I thought, “Those are really old,” and, “Why would I study them?” – only to later have a realization about the critical role of undersea cables.

I think these cables remain invisible, despite the fact that I’ve written this book and plenty of others have written articles, because they are out of sync with our imagination of what communication does, especially digital technology. They seem to make space matter less. They transcend geographic distance. They connect us to people on the other side of the world. As a result, the imagination of the cloud is much more fitting than something that is much more grounded: buried underneath the ocean and going along narrow routes. The aerial, the atmospheric, is part of an imagination which is much more attuned to our feeling of what digital media does.

MJ: Was there an “a-ha” moment of inspiration when you first were taken with the idea of a material network?

NS: A little bit. For me it was more a moment of disjuncture, where I felt like the things I was looking at didn’t make sense in terms of what I thought I had known and read about digital media and digital networks. I didn’t understand. I knew that fiber optic cables existed, but when I started to see that they were incredibly territorialized and concentrated at these pressure points, I realized that it is actually a fairly precarious network, which was not at all what I thought I knew about digital networks. These were meant to be part of a resilient system, where you can send packets in multiple routes, and thus evade any sort of attack, but actually these are vulnerable routes. So, I kept having moments where I found information that didn’t match up with what I thought I knew. And eventually what I thought I knew had to change.

MJ: One of the great things about this book is that it brings history to bear on this material network. I was wondering if you could talk about the role of the cables historically and some of the things that you were taken with in your research.

NS: When I was starting to do the research for the project—in part because it is well known that cables used to be the global form of communication—there’s tons of histories about telegraph networks—I started immediately looking at the history of the system. It wasn’t until I had done quite a bit of work and traveled to many of the Pacific islands and cable hubs that I really got how much that historical network has informed our contemporary system. I would say generally speaking, and I always start with this, history informs the present. We can track genealogies, conduct archaeologies, to better understand the formation of media technologies through historical analysis.

The cable systems are a specific case where this is really true, not just as a general principle, because of the way that the industry developed and the logics that have structured cable development. Because cables are fairly narrow, thin technologies—meaning you don’t need very many, they often carry a lot of capacity (especially today)—they tend to go along relatively few routes, but they are also vulnerable on the ocean floor, and there is an incredible amount of engineering that needs to be done and knowledge about the sea floor before you can lay a cable. For all of these reasons, cablemen and cable builders often continued to lay the systems along the same routes that they did before, following the principle that the routes are tried and true, that the cables didn’t get disrupted in the last twenty years, so they lay the cables in the same route. They use the same landing points because of interconnection with the networks or infrastructure that exist there.

The fact is, there are far fewer cables than we would imagine. We don’t actually need many cables to operate a global network. The cable networks are expensive, so security and the continuity required in making these operations run smoothly is paramount because it costs millions of dollars to drag a cable up from the seafloor and replace it. This means that the cables have continued to be laid along the same lines. Another thing is, there is also a very small community of cable builders, so the social and cultural practices have a continuity over time that is really strong. The cable industry today is sort of like a family. People have close connections with other members of the industry, even in other continents, and that has been true across history, and that depends a lot on how those social processes worked during the colonial era. So I started mapping these lines of continuity from the telegraph era to today, while acknowledging the divergences, and found that it helps to explain how our cable network is set up the way that it is and why it operates the way that it does.

MS: Another interesting aspect of The Undersea Network is that it combines many academic approaches like history and theory, but in many places, it reads like a travel narrative or a detective story, and it is also in many ways an ethnography of a network. Could you talk about how creative or journalistic writing practices have informed your approach?

NS: I wanted a wide range of people to be able to read this book, not just scholars interested in theories of communication and its relationship to geography. The book is meant for people interested in questioning where our cable networks come from: how they emerge, who is involved in this process, who is not involved, who is on the outside or contesting this process? I wanted it to be engaging. For that reason, I tried to develop a writing style that would keep a reader moving through the space of the cable network.

I drew a lot of inspiration from a fairly well-known article by Neal Stephenson, “Mother Earth Mother Board,” written in the late 90’s, a 53-page article in Wired Magazine. He does something similar, traversing the cable network, offering readers a narrative of transmission through the locations, following the construction of a cable system. This has a long history in ship’s narratives, where the men who were laying the cable on a ship are chronicling the process. There is also a long colonial history to this process. One of the things Stephenson ends with is that there is this project of building a cable system, and the biggest source of friction is the surface of mother earth and all of the people on it. That friction must be overcome in order to produce these world-spanning projects.

I wanted to do a similar sort of trajectory, but with an inverse conclusion … I tried to invert the way that we see the relationship between technologies (especially global technologies) and the many different cultures that they are supposed to interlink. In other words, the environment sets the conditions for what can be known, for how knowledge materializes.

Initially, I saw the project as documenting the ecologies of the undersea network, drawing the lines of continuity between history and present. As I developed the concept, I began to see it as this theoretical intervention into how we see digital networks in relation to their environment, using concepts of interconnection, insulation, and tracing historic routes. I was drawn to the materiality of the cables themselves and the desire to make their importance publicly known.

Previous Award-Winning Environmental Journalist Vows To Come Together And Save Water Resources
Next Jack Davis: “Sometimes Breaking The Rules Is A Good Thing.”